The assassination of Nizar Banat, who intended to run in parliamentary elections before they were cancelled earlier this year points the finger of accusation toward EU and U.S!!

U.S and EU have pumped and are still pumping billions of dollars into the PA’s security system reform project. For 25 years, Europe and U.S have been silent about the PA’s crimes of murder, torture and squandering the financial aid of the development of the civil society. Rather, both U.S and EU have blessed the executions of the Palestinian opposition and torturing them in prisons, and have professionalized the crimes of tyranny in the Palestinian Authority and criminalized the opposition and the resistance.

The part of the EU-COPPS [4] in this increasing horror is that they train Palestinian “security” forces [5], most of them recruited from among the poorest and least educated population, to take over the beastly role which the israelis themselves have always enjoyed.

For 25 years, U.S and Europe poured billions into the establishment of a violent, authoritarian Palestinian entity loyal to the western countries.

This is how U.S and Europe established the nucleus of a Palestinian dictatorial regime or a terrorist gang according to international political agendas made in favor of protecting Israel’s security, prolong the age of the zionist occupation and suppressing the Palestinian opposition. 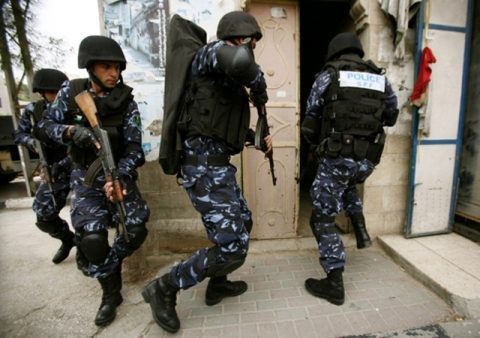 Briefly, the European COPPS forces and the U.S generals operating in the so-called “Office of the United States Security Coordinator (USSC)” in the Palestinian Territories bear full responsibility for the Palestinian Authority’s execution of Mr. Nizar Banat and other elements of the Palestinian political opposition as well as civilians or during raid operations on their homes.

Following the assassination of Nizar Banat, the Western countries that were directly and indirectly complicit in murder of dozens of Palestinians and tutoring thousands by training the Palestinian death squad have played the role of the peace doves. They played on the theater the role of the global opposition, and issued statements of condemnation that can be described as very ridiculous.

The U.S. Department of State has expressed that it is deeply disturbed by the death of Palestinian activist Nizar Banat and the information that has been reported regarding the circumstances of his death and offered their sincere condolences to his family and community.

The statement announced: “We urge the Palestinian Authority to conduct a thorough and transparent investigation and to ensure full accountability in this case. We have serious concerns about Palestinian Authority restrictions on the exercise of freedom of expression by Palestinians and harassment of civil society activists and organizations.”

The European Union delegation to the Palestinians announced that it was “shocked and saddened by the death of activist and former legislative candidate Nizar Banat after his arrest by the Palestinian Authority security forces last night.”

Canada’s representative office to the Palestinian Authority announced that it was “deeply shocked and saddened,” while the United Nations Special Coordinator for the Middle East Peace Process expressed “concern” and “sadness”, and urged a “transparent investigation”. 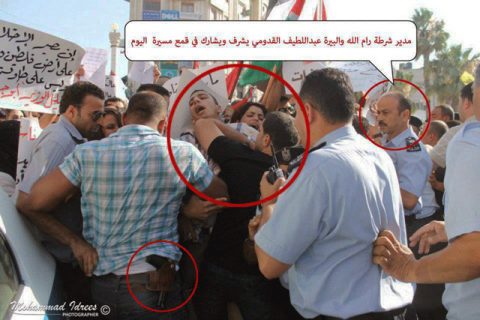 After the assassination of Mr. Banat, the Western countries that were involved in training the Palestinian death gangs played the role of peace makers and issued statements of condemnation like actors in the theater.

Politely, let me ask EU representatives, US State Department, Canada, and the UN who asked the PA to conduct an investigation into the circumstances of the killing of Mr. Banat!
What kind of investigation have the countries complicit in the Palestinian cause for decades asked the Palestinian Authority to conduct into the circumstances of murdering its victim???

Since when the killers and the criminals are honest in conducting an investigation into the crime they themselves perpetrated???

Where was the EU delegation, representatives to the PA and Lt. Gen. Mark C. Schwartz, the current US coordinator to the PA, when Mr. Banat was arrested and tortured several times in prisons at the hands of of the Palestinian security services??

Mr. Banat was executed with premeditation following his recent statements in which he stated that he wanted to go to the European court of justice in order to file a complaint demanding that the EU financial support for a corrupt PA system be stopped after canceling the legislative elections. After the statement, the Palestinian Public Prosecutor, Akram Al-Khatib, issued an interrogation warrant for Mr. Banat.
The Attorney General does not apply the law, but he rather implements the instructions of Mr. Abbas [7] and the leaders of the security services. Simply, there is no law and justice in Palestine, but rather there is a set of rotten and outdated Jordanian laws. The Palestinian Authority headed by a corrupt [8] “president [9]” who has deceived the Europeans and his people [10] a lot and has not built a civil society or a single national civil institution for 23 years.

I didn’t hear that the European Union and the American issued statements on the arrest and the torture of a number of those who had participated in the demonstrations that erupted in Ramallah some weeks ago??

Where are the US and European condemnation statements on the corruption of the Palestinian Authority and scattering the European aid sent to the social security allowances for people who live under poverty in the occupied Palestine, after money mysteriously disappeared??

Where are the US and European condemnation statements on the murder of the political prisoner, Ayman Mohammad Sharif Samara, 40, who “died” on 1 March 2013, at the Jericho Prison in the occupied West Bank? 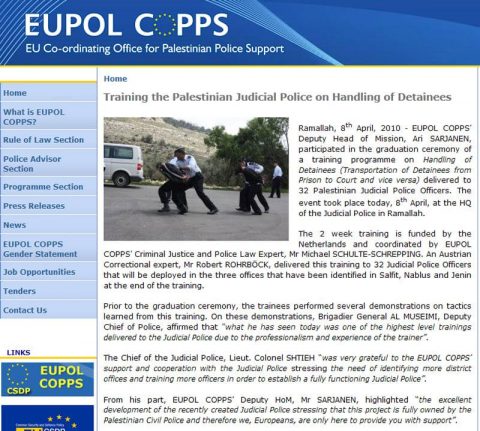 Where are the US and European condemnation statements on the murder of the Palestinian prisoner Fadi Abed Hamadni , a painter, single and aged 28, a student at Al-quds University, who died in the Junaid prison of the PA in Nablus after less than two months of detention by the intelligence of the Palestinian Authority (PA)??

Where are the US and European condemnation statements on the murder of the Palestinian former police Hasan Mubarak Abu Mahameed, who was shot dead by the military police of the PA in Al-Fureidis (al-Asakira) east of Bethlehem on Monday.

Where are the US and European condemnation statements on the murder Mr. Sadi Al-Skhel from Nablus who was murdered at the hands of the Palestinian militarized police?

Where are the US and European condemnation statements on the murder of a Palestinian woman Khaleda Tayseer Quazbeh, 30, a mother of 13 children from Al-Minia in the district of Bethlehem, who was murdered in cold blood by 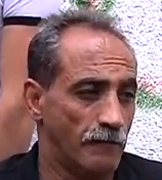 PA thugs in civilian clothes on May 8, 2013? Quazbeh was shot from behind while sitting in her car, the bullets hit her in the shoulder and exited from her chest. According to her husband, Mr. Nawwaf Quazbeh, he said: “I went together with my wife and my daughter to buy clothes for our children. It surprised me when a number of PA elements stopped and attacked me and my family while on our way to shopping. They told me that I am “wanted” by the Palestinian Authority. I told them to send me a notification letter to my shop, where I work and live in Bethlehem. My address is clear in the city. I was talking to them when one of those present opened fire on my wife and shot her in shoulder with three bullets. Another one then pointed his pistol at my head. My wife died immediately.” ???

Where are the US and European condemnation statements on the murder of the Palestinian Amthal Ghannam al-Ghwadre who was executed at the hands of the police and security forces in the village of Bir al-Basha?

I looked through the COPPS website, and after reading through the self-laudatory statements and looking at the pictures published there, I was nothing less than astonished at the crass lies published there. While the COPPS state on their website “The EU has been at the forefront of efforts for peace in the Middle East. Its priorities include further strengthening law and order …”, the facts on the ground are that no Palestinian is safe against murder, torture, abduction, violence at the hands of the jewish colonists, the IDF, the israeli death squads, the thugs of PA militarized “police” units or the intelligence operatives of many Arab countries which are present in the West Bank.

So to counter any protestations of innocence from the irate press department of COPPS, why does the COPPS train Palestinians as thugs, knuckle-dragging goons, death-squaddies, to treat people in such disgusting ways? Do police in European countries treat people like this for voicing their political views? For crimes? For serious crimes? If not, then why are Palestinians supposed to be treated in this way simply for asserting our rights?

Among the other “achievements” lauded on the website of COPPS is the prison for women, a project which was voiced by some of the most despicable characters in the EU as a sign of progress and humanitarian values, a jail built with in architecture of the “Supermax” (see Supermaxed and Wikipedia) prisons of the USA, which have achieved sad notoriety because the people jailed there slowly rot into mental derangement and being jailed in such oubliettes has been characterized as “cruel and unusual punishment” and “equivalent to torture” in court cases in the USA. A quote from Wikipedia about such facilities: “A 2011 New York Bar association comprehensive study suggested that supermax prisons constitute torture under international law and cruel and unusual punishment under the U.S. Constitution” (PDF here). As a Palestinian woman I am without an answer as to what would make any Palestinian woman deserving of such a treatment.

What all COPPS employees and the U.S generals operating in the “Office of the United States Security Coordinator (USSC)” should know is that to them applies the same as to the israelis: you are not welcome in Palestine and your presence there has no legal basis of any kind, despite whatever the anti-meritocracy in Brussels may have decreed in its infinite wisdom. You are ONLY welcome as tourists, friends and guests. Palestine will never turn to be a project of Western countries and all what signed by the so-called Palestinian Authority “President” Mahmoud Abbas and his western allies neither legitimate nor binding by International laws and standeres. “President” Abbas term of presidency was expired in January 2009.

As such, any and all orders given to you by any officer are illegal, and following them renders you a war criminal and an accessory to crimes against humanity. Your legal status in Palestine is comparable to that of the German SS in eastern countries during WW2, who were basically a unit engaged in grave crimes against the populations of those countries: while you probably do not directly engage in murder, abduction or participate in acts conducive to ethnic cleansing yourselves, you are facilitators of these and other crimes against the Palestinian civilian population, and this places you squarely on the wrong side of the law. Do not believe me and do not believe your superiors in command, research it for yourself.

As a Palestinian I say to all COPPS personnel and U.S generals for myself and for all Palestinians whose voice has been silenced by your activities: get out of our country, I don’t want your presence there and no Palestinian wants your presence there, apart perhaps from the political prostitutes who inhabit Ramallah and loot your financial aid to make wealth on our back and on our misery. 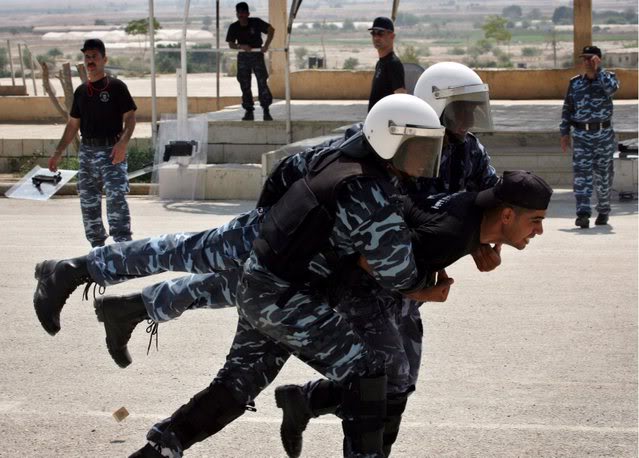 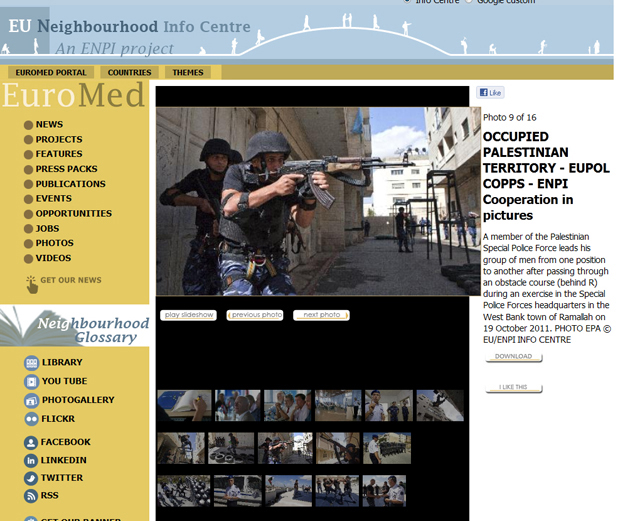 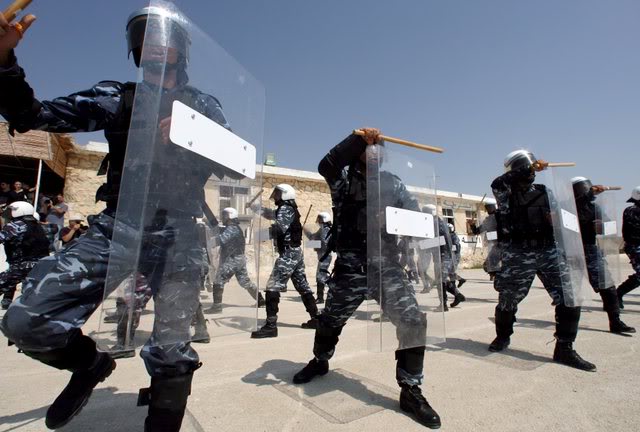