In a stunning turn of events, the United States government must withdraw from Palestine, for a period of not less than 35 years, a new law dictates. 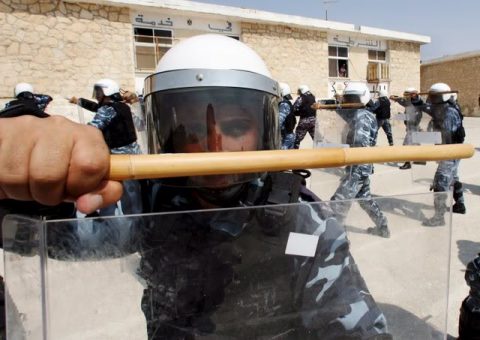 No fundin [1]g any soldiers, no weapons transactions resulting in armed occupying soldiers and occupying security forces in Palestinian villages and cities, no training anybody on anything, no negotiation heading [2] or writing of agreements [3], no paying either government anything, no choosing leaders [3] for the Palestinian people, no influencing when elections will or will not occur, no involvement in elections whatsoever, and further, no propping up an unpopular and illegal fake “president” who has had no elections since his term ended, such as one Mahmoud Abbas, (e.g. “acts like AnAss – Abbas”), sitting for 12 years now illegally and no one wants him as their “leader.” And further, no CIA-led creation of a new Palestinian internal “police security force” [4] that quickly arrests anyone who dares say, for example, that the man still pretending to be president for 12 years past his term ending, steeped in corruption, is doing anything wrong. And, no training of a new Palestinian police force [5], no funding it, no maintaining it, no mandating its agenda, no training [6] anyone to torture anyone [7], no training young Palestinians how to torture [8] or how to do anything else while at U.S.-overseen training camps in Jordan [6], or anywhere else. No training or funding anyone to interfere with Palestinian popular expressions [9] of their opinions and thoughts, or to interfere with their freedom of speech or freedom to assemble in order to express [10] their freedom of speech. No training Palestinians to arrest other Palestinians, [11] like “the opposition.” No deciding what “the opposition” is in someone else’s country and then interfering with election results [12] in someone else’s country. No torturing “the opposition” [4]. No torture [13], and no gag orders [14] about the widespread illegal [14] and obviously unnecessary torture and murder [15]. No corruption-bloated sickness [11] masquerading as legitimate authority while no one can say anything about it because the new CIA-advised [4] Palestinian police force [16] enforces an arrest agenda [11] against anyone who does, and is known to torture [14] many of those it arrests. No funding of any of this.

No United States generals overseeing [17] election result aftermaths, and no U.S. generals training a new Palestinian police force [18] which the CIA helped advise [4], which implements an authoritarian post-election reality [7] which is anything but democratic.

No involvement at all, new law decrees*. Immediate cessation of all activities for a period of not less than 35 years.

Because, new internationally-binding law upholds, the United States government does not own Palestine [19] and the government of said country should not, in arrogance, assume otherwise, and fundamentally attempt to deny and thus destroy a people’s human rights, whether in Palestine or elsewhere.

The Increasing Sovereignty bill of 2021 is binding immediately.

The Palestinian people can, under internationally-binding laws, again speak freely. There are no more restrictions on freedom of speech about their “elected” leadership [7]. 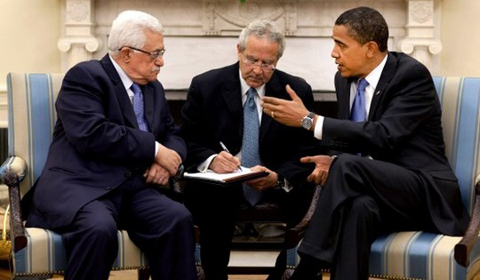 President Barack Obama meets with Palestinian Authority President Mahmoud Abbas in the Oval Office Thursday, May 28, 2009. The man sitting between them is an interpreter. ( This official White House photograph is being made available for publication by news organizations and/or for personal use printing by the subject(s) of the photograph. The photograph may not be manipulated in any way or used in materials, advertisements, products, or promotions that in any way suggest approval or endorsement of the President, the First Family, or the White House.Official White House Photo by Pete Souza)

Further, the gag order, under which the United States government has bullied others into not acknowledging aloud Palestinian sovereignty, the Palestinian human right to live in peace, Palestinian beauty, Palestinian dignity and Palestine history, has been lifted.

The United States government authorities may not speak of Palestine, and should avoid even thinking of Palestine, especially in paternalistic [20], colonialist, imperialistic, arrogant, and/or racist ways for a period of not less than 15 years, under the new internationally-binding guidelines.

The United States government does not own Palestine, the Increasing Sovereignty Bill of 2021 unequivocally states.

Binding immediately, the world looks forward with hope to the future [8], as a major source of war energy is under a strict legal moratorium for the next 35 years, during which the situation will be allowed to evolve with much-increased sovereignty in decision making.

During this period it is assumed that much will be learned through the opportunity to increase human rights [21], and through the complete and immediate deescalation and full cessation of warring impositions from said foreign government.

The Increasing Sovereignty Bill of 2021 is the first of several recent changes in international laws, which have been modernized to creatively increase human rights through greatly increasing the focus on human rights, rather than the stagnating former focus on government assertions of government agendas and so-called “government rights.”

The Increasing Sovereignty Bill stipulates that Palestinians have more inherent right to their own decision-making practices than a foreign government has rights in interfere in the internal affairs of a sovereign people, even when said foreign government says such interference is being done in the name of “help” or “peace.”

The Bill is one of several newly-implemented changes which reflect a shift in consciousness, and, as it goes, human history.

* This article is written about a bill that does not yet exist – though such a bill would be fully supported by applicable international laws – in order to envision and initiate such a positive and human-rights centered reality.

Chelli Stanley is a woman of African, Japanese, and European descent who has traveled widely and volunteered with many initiatives. Chelli lived in Palestine and saw very clearly that the United States’ government’s fingerprints are all over the catastrophes and war crimes that the common Palestinian people suffer from daily. Chelli does independent journalism and grassroots environmentalism.