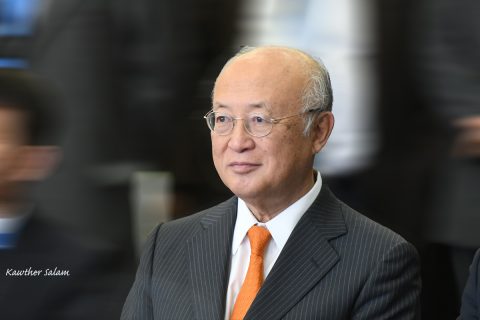 My report on Verification and monitoring in the Islamic Republic of Iran in light of United Nations Security Council resolution 2231 (2015) covers relevant activities of the Agency in that country in the last few months. said IAEA Director General Yukiya Amano in his speech delivered to the Board of Governors.

Amano added: “Iran is implementing its nuclear-related commitments under the Joint Comprehensive Plan of Action. It is essential that Iran continues to fully implement those commitments.”

The Agency continues to verify the non-diversion of nuclear material declared by Iran under its Safeguards Agreement. Evaluations regarding the absence of undeclared nuclear material and activities in Iran continue.

In implementing verification activities in Iran, the Agency analyses all safeguards-relevant information, which normally takes time, and takes action when appropriate. The Agency undertakes analysis and takes action in an impartial, independent and objective manner, within the existing safeguards framework and in line with established safeguards practice.

The number of States with safeguards agreements in force now stands at 183, while 134 States have brought additional protocols into force.

I ask States Parties to the Board of Governors without comprehensive safeguards agreements in force to bring such agreements into force without delay. I hope that States which have not yet concluded additional protocols will do so as soon as possible. I also call on States with small quantities protocols based on the old standard text to amend or rescind them.

About the Application of Safeguards in the Democratic People’s Republic of Korea Amano said:

The Agency has continued to monitor the DPRK’s nuclear programme, using open source information and satellite imagery. The situation at Yongbyon as of the end of February was as follows:

However, without access, the Agency cannot confirm the nature and purpose of these activities.

The IAEA continues to closely follow international developments on the DPRK nuclear issue. We hope that these processes will lead to an agreement and to implementation of concrete denuclearization measures.

The IAEA stands ready to undertake verification and monitoring activities in the DPRK if a political agreement is reached among countries concerned.

I again call upon the DPRK to comply fully with its obligations under relevant resolutions of the UN Security Council and of the IAEA Board, to cooperate promptly with the Agency and to resolve all outstanding issues.

Implementation of the NPT Safeguards Agreement in the Syrian Arab Republic

As far as implementation of safeguards in the Syrian Arab Republic is concerned, there have been no new developments since my last report to the Board. I renew my call to Syria to cooperate fully with us in connection with all unresolved issues.