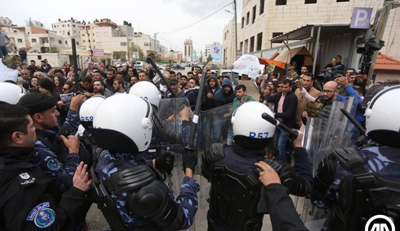 At least 11 protesters most of them journalists were injured by Palestinian police in Ramallah and Al-Duheisha refugee camp near Bethlehem in the occupied West Bank on last Sunday.

Hundreds of Palestinian oppositions gathered in protest of the PA’s policy of security coordination with Israel over a case against a group of Palestinians Basil al-Araj, 31, Mohammed Harb, 24, Haitham Siyaj, 30, Mohammed al-Salamen, 20, Ali Dar al-Sheikh, 22, and Seif al-Idrissi, 27, who were imprisoned and tortured by Palestinian security forces for over five months without charges last year.

Palestinian police violently suppressed a demonstrations using live fire against protesters. Police assaulted journalists and prevented them from covering the event, They broke their photographing equipment and confiscated their cameras.

The merits of the case.
The Magistrate’s Court of Ramallah ruled to release Basil al-Araj, Mohammed Harb, Haitham Siyaj, Mohammed al-Salamen, Ali Dar al-Sheikh, and Seif al-Idrissi, after they launched a hunger strike in protest of their unlawful detention and torture at the PA jail.

However, Harb, Siyaj, al-Salamin, and al-Idrissi were detained by Israeli forces immediately after being freed from PA forces jail, eliciting outrage among Palestinians over the PA’s policy of security coordination with Israel. What means “revolving door policy” of funneling Palestinians from PA jails into Israeli prisons and exchanging the roll of torturing the detainees between the PA dictator regime and the Israeli occupation.

Israeli forces were unable to immediately apprehend Basel al-Araj, a Pharmacist, a well known freedom fighter, an intellectual, a theorist and a sharp critic of the PA. He remained in hiding after his release. The Palestinian forces and intelligence recently helped Israel forces to find al-Araj place near Ramallah.

Israeli forces ambushed Al-Araj last week March 5, 2017 in his place and shot him in head.

A week after al-Araj execution by israeli occupational forces, the PA Magistrate’s Court of Ramallah announced that Basel al-Araj and his fellow prisoners in the case would still be tried in court on March 12, for allegedly possessing weapons, despite the fact the that Basel was assassinated and four of the men remained held in Israeli custody.

The court announcement has evoked a strong emotional response among Palestinians in the north and the south of the occupied West Bank in Ramallah.