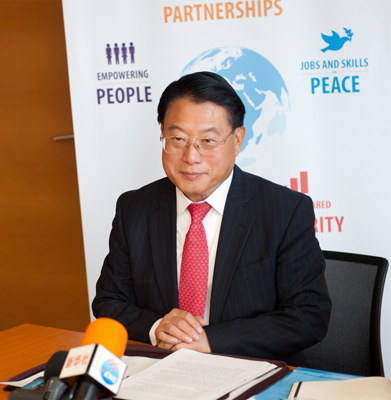 A major international event hosted this week in the Austrian capital by the United Nations Industrial Development Organization (UNIDO) will help advance the implementation of the Sustainable Development Goals through enhanced infrastructure and improved connectivity of the Asian, European and African continents, and their adjacent seas, referred to as One-Belt-One-Road (OBOR) as Mr. LI Yong, Director General of UNIDO told the reporters today during the 50th anniversary week of the UNIDO.

The event brought together over 400 participants, including representatives of different city governments, the private sector and development agencies, as well as of academia. Representatives of 46 cities from nearly 25 countries are participating in the event, including Brussels, Chengdu, Jakarta, London, Moscow, New York, Seoul, Suez, Venice and Vienna.

“Many of the countries along the OBOR are still in the process of development but exhibit great potential for near-future economic growth,” said LI Yong, Director General of UNIDO. “This event can serve as an effective platform for cooperation among all countries involved, offering opportunities for inclusive and sustainable industrial development.”

The “One-Belt-One-Road Inclusive and Sustainable City Exhibition and Dialogue” will support the implementation of the 2030 Agenda for Sustainable Development. This will be done through the OBOR initiative, which promotes an open and inclusive global economy by building cohesive regional trade networks and enhancing connectivity for economic growth. It also aims to improve economic cooperation and to upgrade industrial and infrastructural development.

During the session of today October 20 2016, Mr. Yong has welcomed the UN General Assembly decision proclaiming the period 2016-2025 as the Third Industrial Development Decade for Africa.

Yong, said: “This is great news. Last September, at a meeting at the UN Headquarters in New York, UNIDO, together with the African Union Commission, the Office of the Special Advisor to the UN Secretary-General on Africa, and the UN Economic Commission for Africa, called for this decade as a way to place the African continent irrevocably on the path towards inclusive and sustainable industrial development.”

Noting that Africa remains “the poorest and the most vulnerable region in the world”, the UN General Assembly highlights the need for the continent to take “urgent action to advance sustainable industrialization as a key element of furthering economic diversification and value addition, creating jobs and thus reducing poverty and contributing to the implementation of the 2030 Agenda for Sustainable Development”.

Li said that he was pleased to note that the adopted resolution specifically calls on UNIDO “to develop, operationalize and lead the implementation of the programme for the Third Industrial Development Decade for Africa, in accordance with its mandate and through voluntary contributions”. The resolution also invites UNIDO “to scale up its technical assistance to African countries in order to promote inclusive and sustainable industrial development”.

Li said: “We at UNIDO believe that the path to sustainable development is through inclusive and sustainable industrialization. As the Director General of UNIDO, but also as a citizen of the developing world with a deep personal commitment to Africa and a strong faith in its future, I want to reiterate the validity of the dream of a flourishing continent, in which all its extraordinary resources, both natural and human, can finally be harnessed effectively to generate lasting prosperity for all.”

The UN General Assembly encourages UNIDO’s Director General to mobilize adequate resources for the implementation of the Decade, and reiterates that African countries have primary responsibility for their own economic and social development.

In addition, the resolution invites UNIDO to foster partnerships, as appropriate, with other relevant entities in the UN development system. The General Assembly also calls for enhanced international cooperation, including North-South, South-South and triangular cooperation, in support of Africa’s industrialization, including through the implementation of the Third Decade.

The question below was directed to Mr. LI Yong, Director General of UNIDO during a press conference.

What is the UNIDO industrial development plan which will be implemented in the area of conflict and the Middle East regions in order to achieve better industrial and economic development?