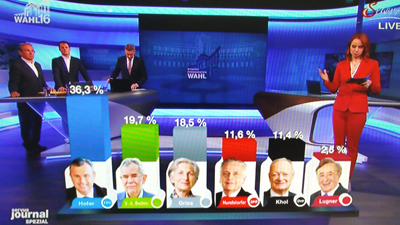 Norbert Hofer, Austria’s anti-immigration of the Freedom Party (FPÖ) won 36.7% of vote, runoff and sent shock waves through the political establishment by defying polls and shooting to the top in Sunday’s first round of a presidential ballot. Hofer threatened to fire the government if it fails to get tougher on migrants.

From the governing coalition, Rudolf Hundstorfer from the Social Democrats (SPÖ) came joint fourth with just 11.2 percent, level with Andreas Khol from the People’s Party (ÖVP).

The only candidate who fared worse than the main parties candidates was Richard Lugner, an 83-year-old construction magnate and socialite married to a former Playboy model 57 years his junior, who won 2.3 percent.

The result, if confirmed, means that for the first time since 1945, Austria will not have a president backed by either the SPÖ or ÖVP.

Support for the two parties has been sliding for years and in the last general election in 2013 they only just garnered enough support to re-form Chancellor Werner Faymann’s “grand coalition”.

Austria also no longer has the lowest unemployment rate in the European Union and Faymann’s coalition, in power since 2008, has bickered over structural reforms.

The next general election is due in 2018. The FPÖ is currently leading national opinion polls with more than 30 percent of voter intentions, boosted by Europe’s migrant crisis.

“This is the beginning of a new political era,” FPÖ leader Heinz-Christian Strache said after what constitutes the best-ever result at federal level for the former party of the late, SS-admiring Joerg Haider.

“One thing has become clear here — a huge and massive dissatisfaction with the government… I am convinced that as president, Norbert Hofer, will act as protector of the Austrian people,” he said.

The Social Democrats (SPÖ) and the centre-right People’s Party (ÖVP) have dominated Austrian politics since 1945 and form the unloved current government of Chancellor Werner Faymann.

The president, who is ensconced in the Habsburg dynasty’s former palace in central Vienna, has a largely but not entirely ceremonial role, and usually comes from one of these two parties or had their backing as an independent.

The FPÖ which under the late, SS-admiring Joerg Haider sent shockwaves around Europe after entering government in 2000, came second in state elections in Vienna and in Upper Austria last year. Read more. [1]