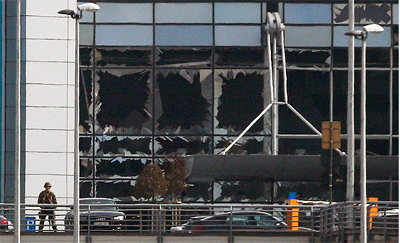 Many people have been killed or seriously injured in terrorist attacks at Brussels international airport and a city metro station, Belgium’s PM says.

Up to 28 killed in explosions at Zaventem airport and Maelbeek metro station in Belgian capital, local media report.

Three explosions have hit the Belgian capital, killing up to 28 people, according to local media.

Shortly after news broke of the airport blasts, an explosion also struck the Maelbeek metro station in the centre of the Belgian capital, close to European Union institutions.

Belgium raised its terror alert to the highest level, diverting arriving airplanes and trains and ordering people to stay where they were. Airports across Europe also tightened security.

The government has not confirmed casualty numbers. Brussels transport officials say 15 died at Maelbeek and media say up to 13 died at the airport.

Belgium has now raised its terror threat to its highest level.

The attacks come four days after Salah Abdeslam, the main fugitive in the Paris attacks, was seized in Brussels.

A sign shows that the network of Salah Abdeslam, the logistician for last year’s Paris attacks who was arrested in Brussels on Friday, is still functioning?

Prime Minister Charles Michel called the Brussels attacks “blind, violent and cowardly”, saying they were a “tragic moment in our country’s history. I would like to call on everyone to show calmness and solidarity”.

Belgium’s foreign minister, Didier Reynders, said on Sunday that Abdeslam had told investigators he was planning a fresh attack in the capital. “He was ready to restart something in Brussels, and it may be the reality because we have found a lot of weapons, heavy weapons, in the first investigations and we have found a new network around him in Brussels,” Reynders said.

That network may have been able to act before security services rolled it up. It is possible it includes two other men suspected of playing major roles in the Paris attacks and who have been on the run since November.

Mohamed Abrini, 31, a Belgian of Moroccan origin, disappeared after allegedly playing a key part in the planning and logistics of the November attacks. He is a childhood friend of Abdeslam – their families used to be next-door neighbours in the Brussels neighbourhood of Molenbeek, where several of the Paris attackers were from – and was described on his international arrest warrant four months ago as “dangerous and probably armed”.