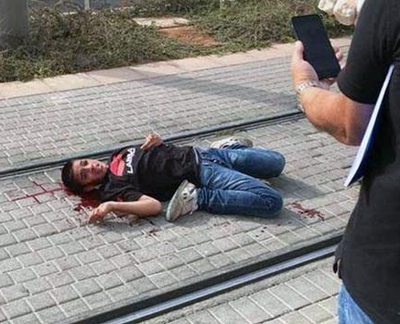 Tuesday, 13 October 2015 00:00 – The Palestinian Center for Human Rights (PCHR) condemns in the strongest terms the crime committed by Israeli forces on Monday, 12 October 2015, in occupied East Jerusalem, which resulted in killing Hassan Khaled Mahayna (Manasra) (15), from Beit Hanina village, north of the city. Moreover, PCHR condemns the deliberate delay made by the David Red Star ambulance crew to offer first aid to his cousin, who was deliberately run over by Israeli forces.

PCHR warns against the increasing number of killings among Palestinian civilians, including children and girls, in the occupied city on the grounds of suspicion of carrying out stabbings against Israeli forces and settlers. This crime was committed few hours after the killing of Mostafa al-Khateeb (18), from Sour Baher village, south of occupied Jerusalem. Furthermore, PCHR denounces this crime that is added to the series of Israeli crimes committed in East Jerusalem in particular, and the occupied Palestinian territory (oPt) in general. Therefore, PCHR calls upon the international community to take immediate action and fulfill its legal and moral obligations to protect the Palestinian civilians in the oPt. PCHR believes that the silence of the international community towards these crimes encourages the Israeli government to continue its policy that violates the international humanitarian law.

According to investigations conducted by PCHR, on Monday afternoon, 12 October 2015, Israeli forces opened fire at Hassan Khaled Mahayna (Manasra) (15) and deliberately run over his cousin Ahmed Saleh Mahayan (Manasra) (13), both are from Beit Hanina village, north of occupied East Jerusalem. They were attacked while going to a mall near their family houses in “Pisgat Ze’ev” settlement. As a result, the first child was killed by several bullet wounds, while the other sustained serious wounds. The Israeli police claimed that two settlers were seriously wounded as the two Palestinian boys had stabbed them.

A video published by Ma’an Satellite Channel showed Ahmed after he was deliberately run over in the light rail area. In spite of the boy’s wound, bleeding and cries for help, Israeli settlers and police officers insulted and swore at him calling for brutally killing him. The video also documents the presence of a David Red Star ambulance crew in the scene but did not offer the boy first aid on time responding to the settlers’ calls stating, “Die Die”.

The killed boy’s family said to PCHR fieldworker in the city that their son Hassan is a 10th grade student at Ibn Khaldoun School, and his cousin is an 8th grade student at the New Generation School. Both of them went back home in Beit Hanina village from their school and then went out heading to the nearby mall in “Pisgat Ze’ev” settlement. Hassan wanted to buy a games CD and Ahmed wanted to buy a pigeon. The family refuted the Israeli police story.

Afterwards, Israeli Special Forces raided over 10 nearby houses belonging to the same family. They detained the family members in the family’s divan and cordoned them. They also arrested the two boys’ fathers and took them to al-Qashala police station to be questioned.

Additionally, at approximately 13:00 on the same day, Israeli police officers opened fire at the schoolgirl Marah Bakeer (17) from Beit Hanina village. As a result, she was seriously wounded. She was then taken to a hospital in West Jerusalem for medical treatment. Israeli officers opened fire at the girl after a settler attempted to attack her when she was present at the bus stop in al-Shaikh Jarrah area, north of the Old City, after finishing her school.

According to investigations conducted by PCHR, the aforementioned schoolgirl was on her way back home from Abdullah Bin al-Hussein School for Girls along with her friend in the street. They both stopped at the red traffic light when a settler cursed them. He kept chasing them to the bus stop in Shaikh Jarrah area near the Israeli police headquarters. The settler was crying that Bakeer is “A terrorist” and she had a knife and attempted to stab him. The Israeli police hurried up and fired four live bullets at Bakeer although she was begging them and saying that she did nothing. One of her friends said that Marah fell to the ground after she was shot, after which dozens of Israeli police and intelligence officers surrounded her and pointed their guns at her although she was bleeding and screaming. When a Palestinian young man attempted to help her, the Israeli police officers arrested him and accused him of being involved with her in planning for a stabbing. The Israeli police claimed that Bakeer was suspected by a Border Guard officer, so he stopped her. Once he approached her, she took a knife out and attempted to stab him, but he opened fire at her.

PCHR strongly condemns these crimes that proves the increasing number of killings among Palestinian civilians in the oPt in general and occupied East Jerusalem in particular. Moreover, PCHR stresses that in the above-mentioned cases, Israeli forces could have used less force against the victims or could have arrested and tied them if their allegations were true. PCHR reiterates its call upon the international community to take immediate and effective actions to put an end to such crimes and reiterates its call for the High Contracting Parties to the Fourth Geneva Convention of 1949 to fulfill their obligations under Article 1; i.e., to respect and to ensure respect for the Convention in all circumstances, and their obligation under Article 146 to prosecute persons alleged to commit grave breaches of the Fourth Geneva Convention. These grave breaches constitute war crimes under Article 147 of the same Convention and Protocol I Additional to the Geneva Conventions.