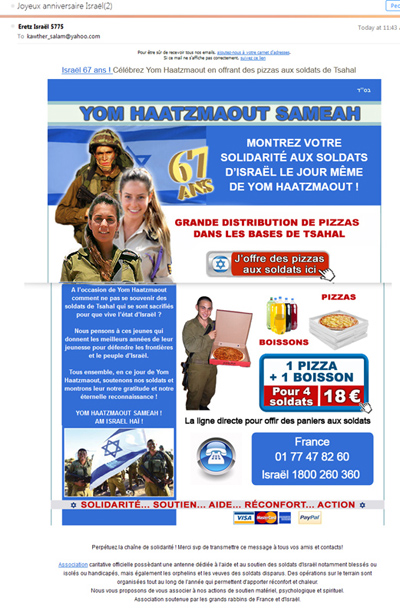 Israel 67 years! Celebrate Yom Haatzmaout by offering pizzas to the IDF soldiers and sending baskets of gifts to the IDF in Jerusalem

Thursday – April 23 1015 – I received an e-mail from a zionist association based in Paris – EU.  The sender asked for financial donation and gifts to the Israeli war  criminal soldiers.

I sent an answer to the e-mail,  in which I suggested that everybody should send a basket of dirt, shit and garbage and bottles of urine to the Israel soldiers on the anniversary of the Palestinian Nakba and occupying my homeland.

I made this suggestion because I documented the sick behaviour of the Israeli soldiers in 1999-2000 in the film “Hebron: City Without Mercy”.

The film shows the IDF soldiers urinating in bottles and offering this to Palestinians to drink as “Coke”. The Israeli soldiers where calling each others on the roofs of Palestinians houses at the mid of night, one of them said that he want to do something great and urged his colleagues to pay attention. Then the he proceeded to urinate into the water tank of the family who owned the house.

In my opinion – the establishment of Israel had no legitimacy, and its recognition as a state on part of the international community was a grave mistake and crime against humanity made possible by massive bribes of those involved from part of the financiers of Zionism of those days, most prominently the Rothschild crime family. Now is a better time than ever to end the illegitimate, criminal and morally bankrupt zionist project for ever, together with its occupation of our holy land.

The legitimacy of the UN and international law depends upon the delegitimisation and dismantling, by the international community as represented in the organizations of the UN, of the zionist crime which is Israel. The continued existence of this criminal and terrorist organization is a danger not only to Palestinians and to the fragile edifice of international law, but to the welfare of all peoples of the world.
Below a screen-shot of the e-mail followed with translation and a copy of my answer.

Israel 67 years! Celebrate Yom Haatzmaout by offering pizzas to the IDF soldiers and sending baskets of gifts to the IDF in Jerusalem

SHOW YOUR SOLIDARITY WITH SOLDIERS OF ISRAEL SAME DAY YOM HAATZMAOUT!
Soldiers – hayalim – Yom Haatzmaout solidarity support together
A “Yom Haatzmaout” at Haatzmaout day, how we do not remember the IDF soldiers who “sacrificed” themselves for lively state of Israel?

Together with Yom Haatzmaout, support our troops and show them our gratitude and eternal gratitude!

Perpetuate the chain of solidarity! Thank you and please pass this message to all your friends and contacts!

Official charity possessing a dedicated antenna to the help and support of Israel’s soldiers who were injured and particularly the disabled soldiers, the orphans and widows of fallen soldiers. Field operations are organized throughout the year to help and provide comfort and warmth for the IDF.
We propose you to associate with our actions of material support, psychological and spiritual.
Association supported by the chief rabbis of France and Israel.

I want to send the israeli war criminals who you called in your e-mail “young soldiers” a basket of shit and several bottles of urine as the only gifts which they deserved.

The IDF soldiers forced the Palestinian victims to drink their urine while standing on the rooftops of their houses in Hebron and occupying my homeland Palestine.

Shame on you to beg the victims of the war criminals to donate baskets of food and Pizza and solidarity with the israeli crimes against humanity,  war crimes, genocide and ethnic cleansing.

I suggest that everybody send bottles of urine and baskets of shit for your soldiers in order to remind them with their devil crimes and the trauma which they caused to the Palestinian children since decades.