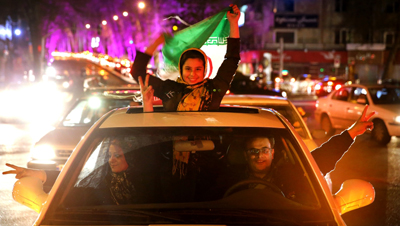 After 18 months of negotiating, Iran has come to a preliminary agreement with China, Russia, France, UK, US and Germany (P5+1) on Tehran’s nuclear program. But what is Iran giving up to seal the deal and how can it benefit in the long run?
Uranium enrichment – Iran has agreed to only enrich uranium to 3.67%

The process of turning uranium found in the ground into nuclear fuel that can be used to create nuclear energy, or potentially a nuclear bomb.

To build a nuclear bomb, uranium needs to be enriched to about 90 percent. The 3.67 percent agreed by Tehran means it would be practically impossible for Iran to build a nuclear weapon, but would allow it to use nuclear material for peaceful purposes.

Iran gets to keep its nuclear program, albeit a limited one, while the likes of the US now know it will be much harder for Tehran to build a bomb.

The outline agreement aimed at curbing Iran’s nuclear drive was clinched on Thursday after marathon talks in Switzerland, and marks a major breakthrough in a 12-year standoff between Iran and western countries, which have long suspected Tehran of seeking to build an atomic bomb.

“This is a crucial decision laying the agreed basis for the final text of joint comprehensive plan of action. We can now start drafting the text and annexes,” said Mogherini, who has acted as a coordinator for the six powers – Britain, China, France, Germany, Russia and the United States.

Iranian Foreign Minister Mohammad [1] Javad Zarif called it a “win-win outcome”, while US President Barack Obama hailed the deal as a moment that the US and its allies had “reached a historic understanding with Iran”.

Israel has argued [2] relentlessly against such a deal and Netanyahu said on Thursday that an agreement would have to “significantly roll back Iran’s nuclear capabilities”.

In a phone conversation with Obama, Netanyahu said that a final deal based on this agreement “would threaten the survival of Israel”, while the prime minister’s spokesperson Mark Regev quoted the premier as saying that the emerging deal “would not block Iran’s path to the bomb. It would pave it”.

But Obama said that the issues at stake are “bigger than politics”.

“These are matters of war and peace,” he said, and if the Republican party-controlled Congress kills the agreement “international unity will collapse, and the path to conflict will widen”.

Netanyahu echoes Obama’s concern but conversely. “[The emerging deal] would increase the risks of nuclear proliferation and the risks of a horrific war,” Regev quoted him as saying.

Repeating previous Israeli warnings, Intelligence Minister Yuval Steinitz said on Thursday that all options were open. “If we have no choice, we have no choice… the military option is on the table,” he said.

Israel is the Middle East’s sole, albeit unacknowledged, nuclear power.

Yossi Kuperwasser, until recently the director general of Israel’s strategic affairs ministry, said Netanyahu would be seeking to keep up pressure right up until a final accord, which is due to be drafted by the end of June, AFP news agency reported.