On Wednesday April 1st, 2015, on the last day of the United Nations Seminar on Assistance to the Palestinian People, The second plenary session on prioritizing reconstruction tasks in Gaza, focusing on ways to resolve Gaza’s critical water crisis and develop its infrastructure, the participants considered ways to rehabilitate and construct water and sewage networks and treat wastewater alongside the advantages of building a large seawater desalination plant.

A proposal to construct a seaport in Gaza, which could end the blockade and restart exports to Gaza’s traditional markets, was also discussed.

Shaddad Attili, former Minister-in-Charge of the Palestinian Water Authority, said the State of Palestine had acceded to the International Criminal Court and it had many reasons to bring a complaint against Israel, which included the water crisis. The water in Gaza was not fit for human use. The water crisis in Gaza had been engineered and the only solution was a political solution for the Occupied Palestinian Territory, he emphasized. He recalled the history of actions to tackle the water crisis in Gaza dating back to 1993, many of which were thwarted for political reasons. Given that there was no alternative source of freshwater, a large-scale desalination plant was an absolute requirement if the water deficit in the Gaza Strip was to be addressed. 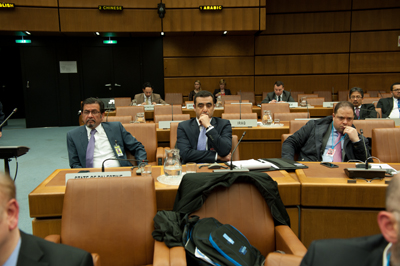 The proposed large-scale desalination facility would cost around $450 million, he said, thanking Kuwait for its recent and generous pledge of $200 million. If support to build the desalination facility could not be found then soon there would be no water in Gaza. Access to drinking water was a basic human right, he said, calling for a road map and a serious programme of implementation to address the water, food and energy crises in the Gaza Strip.

June Kunugi, Special Representative of the United Nations Children’s Fund (UNICEF) Jerusalem, said almost 95 per cent of Gaza’s aquifer was not safe for human use without treatment. The water situation was compounded by the energy crisis. The main problems were over-extraction of the available water and pollution from seawater intrusion, nitrates, pesticides and sewage. The 2014 conflict inflicted an estimated $33 million of damages to water infrastructure and losses of $94 million to the entire water sector, including through higher operational costs. UNICEF was concerned that 120,000 people had been dependent on water tankers since August 2014 and the per capita water consumption in Gaza had fallen to less than half of the 100 litres per day recommended by the World Health Organization.

Three key infrastructure development projects were a large-scale desalination plant, a north-south carrier and additional wastewater treatment plants. Increasing the amount of water imported from Israel and other sources should be considered. Inaction would mean that by 2020 the Gaza aquifer would be irreversibly damaged, there would be no water resources posing serious public health risks and Gaza would have no food security due to huge limits on agricultural production. Ultimately, the livelihood of the population of Gaza would be threatened, she said. 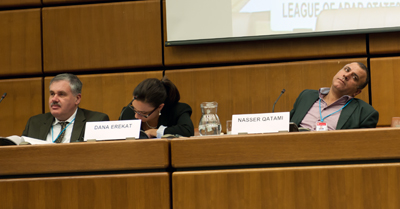 Fuad Bateh, international adviser on water and environment from Barcelona, said he had been working on advancing the desalination facility for the Gaza Strip project for more than six years. The desalination project would create additional high-quality water and fairly distribute it through a national water carrier, rehabilitate the coastal aquifer through reducing groundwater pumping rates and create job opportunities through the construction and operation of the facility. The overall cost of the project was estimated at €310 million. The Arab Gulf countries had suggested that they would meet half the costs, with the remainder to be met by the European Union and other countries.

On 12 March, Kuwait had pledged $200 million to the project. The European Commission had expressed its readiness to provide a sizeable financial commitment to the project conditional on two critical issues: the 25 megawatts required to power the desalination facility should be secured by Palestine with one of its neighbours as part of an agreement for power supply to the Gaza Strip; and a more explicit commitment from Israel offering the international community reassurance on the integrity of the future facility. He called on States to project their political commitment to the project, particularly towards obtaining an agreement on the provision of power supplies.

Geoffrey Aronson, former Director of Research and Publications at Foundation for Middle East Peace in Washington, D.C., said Gaza did not need humanitarian assistance, but rather a trading border open to the outside world that functioned according to international standards and practices and would enable long-suffering Gazans to go back to work. Israel’s no-trade policy reflected a strategic choice to divorce itself from the Gaza Strip. Egypt, too, after July 2013, was even more adamant than Israel in its refusal to ensure the creation of a functioning trade border between Egypt and Gaza, viewing it as an Israeli responsibility.

Given the situation on Gaza’s land borders, the search for a viable trade option must necessarily focus on maritime options, with a seaport being a sensible suggestion. There were many potential options to establish new maritime trade routes to and from Gaza that could make use of Israeli, Egyptian, Turkish and Cypriot facilities. Israel itself had an interest in a Gaza seaport because it would reduce its operational and political role in Gaza trade and shift its responsibility for Gaza to Egypt and the international community in a way that protected its security concerns in the absence of an overall agreement. An international operator could manage the Gaza port together with Palestinians, goods destined for Gaza could be inspected and bonded in an offshore port and a simple “roll-on roll-off” facility in the Gaza port would receive goods for import. Putting Gaza back to work would offer advantages to all parties, he said. Establishing a working port in Gaza would recreate the historic route that linked the Mediterranean, through Gaza, to the Arab heartland and secure the distant prospect of a safe passage linking Gaza with the West Bank and eastern points through Jordan or via Sinai to Saudi Arabia. 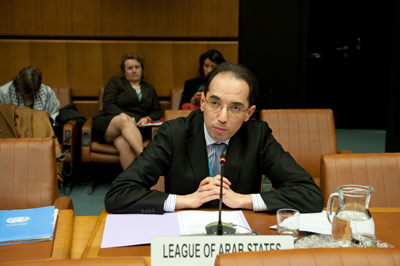 Barbara Capone, Chief Executive Officer and Project Leader, Sunshine4Palestine Association, spoke about possible technical solutions to water-related problems. The main challenges were the pollution of drinking water, the fact that Gazans had less water that the WHO minimum standard, the seawater intrusion contaminating drained aquifers, the destruction of sewers and the water supply network and the pollution of seawater by nitrates, bacteria and chemicals, including white phosphorous. The solutions would depend upon the size and consumption level of the beneficiaries, including factors such as demographic groups, inhabitants of public buildings or individual families. Briefing participants on advantages and disadvantages of a single large desalination plant as opposed to small-scale desalinators, which she said were more sustainable, she said other possible solutions included harvesting water from the air using condensation and the use of hygroscopic salt techniques. She also set out the benefits of using graphene membranes to filter salt and other pollutants from seawater rather than traditional reverse osmosis systems. The advantage of using small plants, new technologies and self-made water condensers to ease water shortages in the Gaza Strip was that they could be tailored to the size and needs of smaller population groups and could be assembled with locally available materials.

The representative of Jordan emphasized that only a political solution could ensure a transition from relief to sustainability and asked expert speakers how that could be done. Continuing, the representative said that despite its own domestic challenges, Jordan had extended assistance to the Palestinian people but there was clearly a need for an international solution and asked what the international community could do.

The representative of Indonesia said the presentations heard so far in the Seminar only highlighted how interlinked and complex the challenges faced by Gaza were, such as water and energy. The representative then asked the experts about proposals to import energy and water from Israel, saying they were difficult to comprehend given that Israel was responsible for destroying the infrastructure in the first place. 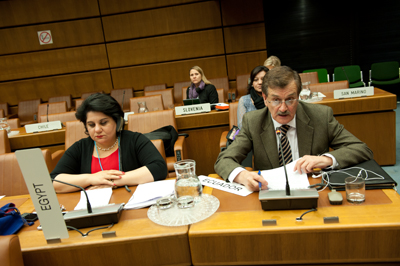 The representative of Austria commended the Palestinian people, especially the people in Gaza, for their determination to face the challenges they were confronted with in a very complex environment. Commenting on the presentation by Ms. Capone, the representative said it was important to support smaller-scale projects that could more efficiently ease the water crisis in the Gaza Strip. She noted that the Foreign Ministry of Austria was sending a delegation to the Gaza Strip in April.

Other participants took the floor to make comments and ask questions. One speaker said the main strategic issues were agriculture, food, water, sanitation, the environment and the provision of energy, and that cross-cutting issues in the wider context of Palestine included governance, accessibility and the freedom of movement. It was time to move to a resilient and developmental perspective that above all needed a clear advocacy strategy.

Another speaker asked if there was a connection between replenishing the coastal aquifer off Gaza and the mountain aquifer in the West Bank and what options did the Palestinian leadership have to avoid the effective Israeli veto on projects discussed today. Putting forth a creative proposal, a participant from Iceland suggested shipping surplus fresh drinking water by super-tankers from Iceland to Gaza and asked the experts’ views on it.

During the replies, Ms. CAPONE said that obviously bringing fresh drinking water from Iceland to Gaza would bring relief to the population but she could not comment on the environmental impact of such an undertaking. 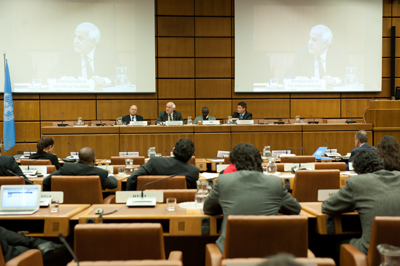 Responding to the Jordanian representative, Mr. BATEH agreed that a comprehensive political solution was needed. However, that type of approach put everything into one basket and he saw daily opportunities in which countries could and should intervene. Jordan alone had the opportunity to solve the power crisis in Gaza, he continued, suggesting that Jordan could purchase natural gas from Israel then link any contractual arrangement to opening the Gaza marine gas field or to Israel providing energy to Gaza in a basic energy swap. Turning to a question raised by Indonesia’s representative, he agreed that Israel engaged in behaviour that made one wonder if it could be part of the solution. Indonesia should distinctly call on Israel to find a power solution for Gaza, he said. In response to Austria’s intervention, he welcomed the upcoming visit to the Gaza Strip by that country’s foreign ministry and asked that, upon returning, it would lobby Brussels to support the construction of a large desalination plant.

Mr. Attili said he took all proposals seriously, including the one to import drinking water from Iceland. The Palestinian authorities had already looked at the possibility of importing drinking water from Turkey, but had been forced to rule it out due to the prohibitive import costs set by Israel. The water situation was so dire that women in the Gaza Strip were delivering blue babies because of the nitrate concentration in the water, he said, stressing that a large desalination plant would be the best solution. The mountain aquifer in the West Bank received rain water and it had no linkage to the coastal aquifer in the Gaza Strip in terms of recharge. There was evidence that Israel had placed several interceptive wells to take water from the West Bank aquifer, he noted. Access to food, water and energy were fundamental human rights and a sustainable plan to provide those in Gaza Strip had to be put in place.

Responding to a question about ways of measuring a move from relief to sustainability, Ms. Kunugi said it had to be ensured that the approach taken was a capacity-building one with longer-term goals that supported development objectives. Thanks to funding from Japan, UNICEF had installed 13 small desalination plants using existing wells. The 13 plants supported 95,000 people, but were only designed to last for 10 years. Giving an example of capacity-building in the Gaza Strip, she said for years the international community had provided tens of millions of dollars for immunization campaigns, but today Palestine had procured its own vaccines from UNICEF and others and had carried out its own programmes.