Feb, 25 2015 – Yesterday the European Union and UNICEF jointly marked the completion of the first component of a EUR 10 million desalination plant which will provide over 75,000 Palestinians with clean, drinking water in Gaza.

The construction phase of the project, which includes four components and is led in partnership with the Palestinian Water Authority (PWA) and Gaza’s Coastal Municipalities Water Utilities (CMWU), was launched with the laying of the first stone in March last year. The event yesterday marked the completion of an 18 – kilometer long pipeline which will transfer 6,000 cubic meters of desalinated seawater from the desalination plant to at least 35,000 Palestinians living in Khan Yunis, and 40,000 in Rafah, southern Gaza. 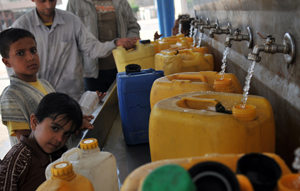 “The needs in Gaza for fresh water are huge. Nearly 95% of water in Gaza is considered unfit for human consumption. Enormous efforts are needed to ensure that Gazans can access fresh water. This is both a fundamental human right and an urgent humanitarian need for Gaza’s population,” said the EU Representative John Gatt – Rutter. “The completion of this pipeline today is evidence of just part of the EU’s wider, long – standing commitment to supporting access to clean water for Palestinians. Such projects are even more essential and crucial following the war last summer in Gaza, which made already harsh living conditions for Gazans even more unbearable.”

“Limited water supply in Gaza has long meant high prices and poor water quality, but the introduction of this seawater desalination plant will help bring a dramatic improvement and help children and their families fulfill their right to safe drinking water,” said June Kunugi, UNICEF Special Representative in the State of Palestine. “The advancement of the project is also a welcome sign of hope, six months after a ceasefire took hold in Gaza” she added.

The construction of the desalination plant on land adjacent to the sea north of Khan Yunis and the procurement of water – treatment equipment will be completed in the coming months. The plant is expected to start operating by the end of the year.

Safe drinking water is a precious commodity in Gaza – only five percent of the water extracted from the coastal aquifer has been found to be suitable for human consumption.

Seawater desalination is one of the strategic options chosen by the Palestinian Water Authority (PWA) to help provide 1.8 million Palestinians in Gaza – including nearly one million children – with clean water.

A comparative study conducted in 2011 concluded that it was an essential, pragmatic solution to provide a consistent supply of safe, drinking water to the expanding population.

The desalination of seawater from the Mediterranean is essential to curb over – extraction of groundwater from the Coastal A quifer and to prevent an environmental disaster with the total collapse of this aquifer.

A 2012 United Nations’ report warned that over – extraction could render Gaza’s sole aquifer unusable by 2016.