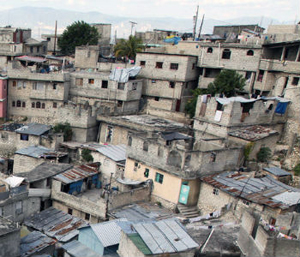 While there are no slums in the countries identified in a new report by the United Nations Economic Commission for Europe (UNECE), people living in Illegal settlements face numerous problems, it says.

The solution is to change government thinking on the issue, according to the UN agency. Jocelyne Sambira reports from Geneva [1].

Poverty, conflict and natural disasters are just three of the reasons why illegal houses continue to spring up today.

At the latest count, there were 3.5 million in Albania, Macedonia, Greece, Cyprus and Montenegro.

A UN forum in Geneva is finding ways to provide people who live in illegal communities with things we might take for granted – like electricity, tarmac roads and street lighting.

Chryssy Potsiou thinks she has the answer.

She’s the author of a United Nations Economic Commission for Europe report on informal settlements and she says governments need to legalise the situation.

This means giving people ownership of illegal properties so they can start paying tax on them, since there’s too little public money to provide sufficient public housing.

“We need to assist them. We need to integrate this informal real estate into the circle of the economy.”

The problem is urgent in south-east European countries such as Montenegro, where UNECE says more than half of the population lives in informal settlements.