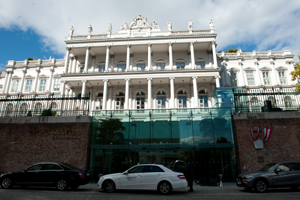 Iranian and six world powers negotiators are gathering in Vienna this week for what’s expected to be a final push toward a deal over Iran’s nuclear program.

Meanwhile, US Secretary of State John Kerry will join the negotiators in Vienna at least on Thursday afternoon Nov 20 1014. Kerry met last week with Minster Jawad Zarif in Oman.

Iran wants the United States and its allies to lift its economic sanctions. The country also wants to continue enriching uranium for a non-military program.

The six states, France, China, Russia, Germany, the United States and Britain, want Iran to scale back its uranium enrichment activity to deny it any capability to quickly produce an atomic bomb if it wanted to. France has consistently been more opposed to nuclear concessions than the other five world countries negotiators. Iran says its nuclear program is entirely peaceful and wants them to lift sanctions.

Secretary Kerry who held earlier on Wednesday consulting meetings with officials in London will fly tomorrow (Thursday) to Paris where he will hold separate meetings with foreign ministers of France.

British Foreign Secretary Philip Hammond said after the meeting with Secretary Kerry that he is not optimistic that world powers and Iran would clinch a full nuclear deal by November 24 but that there may be a way of extending the self-imposed deadline.

He said: “I think if we make some significant movement we may be able to find a way of extending the deadline to allow us to get to the final deal if we’re making a good progress in the right direction.”