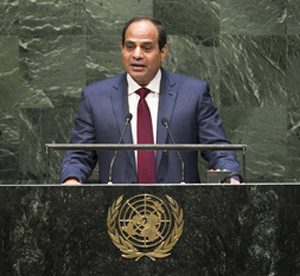 At the 69th Session of the UN General Assembly (UNGA 69) which held last week at the UN Headquarters in New York, President of the Arab Republic of Egypt, Abdel Fattah Al Sisi, has strongly incited the International community against the Islamic movement in his own homeland Egypt and the Middle East region. He described the movements in strongest possible terms and words such as terrorists, extremists and obscurantist presenting an overview of the movement’s history since the twenties of the last century.

He said that Egypt had warned about the aims of extremist groups that were transforming the Jewish, Christian and Muslim values of justice, compassion and mercy into grim sectarianism and destructive civil and regional wars.

Al Sisi said: “Egypt has suffered from the scourge of this terrorism since the nineteen twenties, when it concealed its poisonous viewpoints behind religion to reach power and establish the Caliphate State, relying on armed violence and terror to achieve its objectives, and generating in the process a handful of extremists that commit atrocities in the name of religion. Here I stress that we should not allow them to abuse Islam and offend the one and a half billion Muslims that cherish its noble values. Religion, by virtue of its holiness and sanctity, cannot be put to the test by humans to judge whether it has succeeded or failed.”

He added: “Terrorism is a plague that does not differentiate in its spread between developing and developed societies. Terrorists come from differing societies. They are not bound together by any true religious faith. That is why it is imperative that we all intensify our cooperation and coordination efforts to end the support provided to these terrorist organizations that enables them to continue perpetrating crimes, pursuant to the principles of the Chatter of the United Nations and in fulfilment of its objectives.”

Al Sisi has presented a brief about the situation in his homeland, he said:” I first salute the great people of Egypt that made history twice over the past few years. First: when they revolted against corruption and despotism, and claimed their right to freedom, dignity and social justice and second when they held on to their identity, and enthused by patriotism, they rose up against exclusion, refusing to succumb to the tyranny of a faction who, in the name of religion, put its narrow interests before the interests of the people.”

Mr. Al Sisi said he had sought to build a civil democratic State by adhering to a road map for the future agreed upon by national power, which would be completed with the holding of parliamentary elections.

“Our aim is to build a ‘New Egypt’ […] A State that respects the rights and freedoms, honours its duties, and ensures the co-existence of its citizens without exclusion or discrimination,” he said. That State should also respect and enforce the rule of law, guarantee freedom of speech and religion, and work towards growth, prosperity and a promising future for all Egyptians. To attain that, the Government began implementing an ambitious programme to spur development and build the foundation for a free-market, investor-friendly economy by 2030. The New Suez Canal Project was proof of the New Egypt’s resolve to forge a better future for its children. He invited everyone to participate in the conference on national and regional economic development in Egypt next February.

Al Sisi admitted that his country Egypt, in agreement with Libya’s neighboring country has put forward an initiative that sets specific steps and a clear horizon to end the plight of this brotherly country.

He said:” Egypt, in agreement with Libya’s neighboring countries, has put forward an initiative that sets specific steps and a clear horizon to end the plight of this brotherly country. We can build on this initiative to reach a comprehensive political solution that strengthens the elected Libyan institutions, and ensures that the bloodshed is put to an end and that the territorial integrity of Libya is preserved. To succeed, we must effectively stop the smuggling of arms into Libya, and deal relentlessly with the extremist movements that resort to weapons and violence, and that does not recognize the democratic process.

About positions of Egypt of the crises in neighboring countries, Syria, Iraq and Palestine, Al Sis said About Syria: “I emphasize Egypt’s support to the aspirations of the Syrian people to a safe life that ensures the stability of Syria, preserves its territorial integrity, as well as the unity of its people.

About Iraq he said: The formation of a new government approved by the Parliament in the brotherly coxmtry of Iraq is a significant development that restores hope in the possibility of an improvement in the situation there, and in the success of the internal and external attempts to achieve stability, restore the areas that fell under the control of the terrorist organization
“ISIS”, maintains the territorial integrity of Iraq, end the bloodshed, and realize the aspirations and hopes of the Iraqis, as well as their efforts to bring back security and stability in their country.

About Palestine Al Sisi said: “Palestinians still aspire to establish their independent state on the occupied territories in 1967, with East Jerusalem as its capital, on the basis of the principles upon which the peace process was established since the nineteen seventies following an Egyptian initiative. These principles are not up for negotiation, otherwise the basis of a comprehensive peace in the region would erode, and the values of justice and humanity would vanish. The continued deprivation of the Palestinian people of their rights is undoubtedly exploited by some to inflame other crises, achieve hidden goals, fragment Arab unity, and impose control on Palestinians under the guise of realizing their aspirations.”