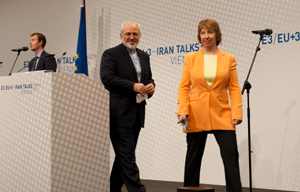 The Islamic Republic of Iran and the five permanent members of the UN Security Council, USA, France, Britain, Russia, China and Germany, began the third day of the latest round of nuclear negotiations in Vienna under complete secrecy .

Since May 13 2014,  journalists accredited by the government to cover the negotiations have been gathered at the press room of Vienna International Center and left like the deaf at a wedding, not knowing what is going on around them.

The organizers left the the journalists far away from the center of the negotiations, close to a big restaurant and with a big supply of different canapés of fish, cheese and many other kinds as well as delicious meals, as if we were in a vacation.

During the last round of talks, Iran’s foreign minister Jawad Zarifi said that his country and the six powers had reached “50 to 60 percent agreement” on the shape of a nuclear deal meant to “crimp any potential Iranian attempt to build nuclear arms” in exchange for an end to crippling economic sanctions. But during this round of talks and after three days of negotiations, it is still not clear if the negotiators will finalize the agreement and reach a deal with Iran, or alternatively, if they will extend the negotiations and delay their talks for another round.

The negotiators held three rounds of preliminary talks in Vienna under the auspices of the Austrian Foreign Ministry over the past three months. The negotiations in Vienna followed the Swiss – Geneva talks held on November 24 2013 to build a deal between Iran and the six powers. On January 20, Iran and the six powers came to agreement in which they set July 20 as a deadline to clinch a long-term nuclear deal. During the Geneva deal, the six countries agreed to provide Iran with some sanction relief in exchange for their agreeing to limit certain aspects of their nuclear activities.