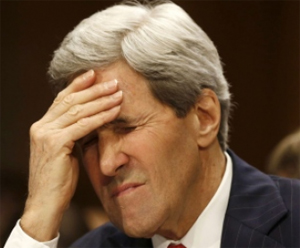 Update: After a day of outraged responses, US Secretary of State John Kerry said Monday that he had chosen the wrong word when describing Israel’s potential future as an “apartheid state” if it didn’t reach a peace deal with the Palestinians.

“I will not allow my commitment to Israel to be questioned by anyone, particularly for partisan, political purposes, so I want to be crystal clear about what I believe and what I don’t believe,” Kerry said after US lawmakers and pro-Israel groups criticized him, with some demanding his resignation or at least an apology.

US Secretary of State John Kerry warned foreign leaders and experts mainly from the US, Western Europe, Russia, and Japan on Friday saying that israel will risk becoming an apartheid state or losing its Jewish identity if a peace accord with the Palestinians is not reached in the near future. Kerry’s comments were published on Sunday by The Daily Beast news website [1].

The secretary of state said that if Israel doesn’t make peace soon, it could become an apartheid state, like the old South Africa.

“A two-state solution will be clearly underscored as the only real alternative. Because a unitary state winds up either being an apartheid state with second class citizens, or it ends up being a state that destroys the capacity of Israel to be a Jewish state,” Kerry told the group of senior officials and experts from the U.S., Western Europe, Russia, and Japan. “Once you put that frame in your mind, that reality, which is the bottom line, you understand how imperative it is to get to the two state solutions, which both leaders, even yesterday, said they remain deeply committed to.”

According to the 1998 Rome Statute [2], the “crime of apartheid” is defined as “inhumane acts… committed in the context of an institutionalized regime of systematic oppression and domination by one racial group over any other racial group or groups and committed with the intention of maintaining that regime.” The term is most often used in reference to the system of racial segregation and oppression that governed South Africa from 1948 until 1994.

Earlier in April, Kerry urged Israeli and Palestinian leaders to prevent the negotiations from collapsing, saying it was regrettable that both sides have taken steps recently that are not helpful in promoting peace and ending the decades-long conflict between the two sides.