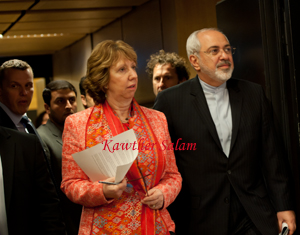 Vienna International Center – Kawther Salam – Catherine Ashton, EU foreign policy chief said in a joint statement with Iranian Foreign Minister Mohammad Javad Zarif during a press conference held today afternoon at the Vienna International Center that the nuclear talks between Iran and the six world power countries were “standing in the way of a comprehensive agreement and we are trying as hard as we can to drive the process forward.”

She said that `’a lot of intensive work will be required to overcome the differences ahead.”  Ashton suggested some progress was made and the negotiators are now looking to the next round on May 13 2014. She said: “We will now move to the next phase in the negotiations in

Ashton and Zarifi stated that the negotiators will meet again on May 13 2014, two months before July 20 2014, the deadline for finalizing the accord. She said that “a lot of intensive work will be required to overcome the differences ahead.” 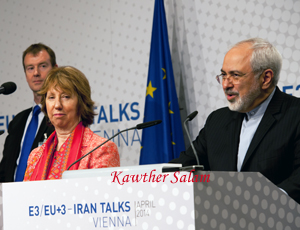 Iran and six world powers namely the USA, France, Britain, Russia, China and Germany started a new round of nuclear negotiation on Tuesday April 8 in Vienna, aiming to reach a draft of a final agreement.

The power countries want Iran to scale back its uranium enrichment activity to deny it any capability to quickly produce an atomic bomb, if it decided on such a course. Iran says its nuclear program is entirely peaceful and wants them to lift sanctions.

Iran’s foreign minister Zarifi spoke in Farsi while reading his statement despite there was no translation during the press conference, he said that his country and six world powers are reached “50 to 60 percent agreement” on the shape of a nuclear deal meant to crimp any potential Iranian attempt to build nuclear arms in exchange for an end to crippling economic sanctions.