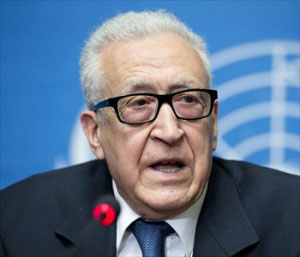 Delegations from the Syrian government and opposition groups met face to face twice Geneva on Saturday with the issue of humanitarian access being first on their agenda.

United Nations and Arab league special envoy Lakdhar Brahimi said although the two sides were not speaking directly to each other, some little progress had been made and the discussion will resume on Sunday.

Mr Brahimi said Saturdays discussions centered on the delivery of humanitarian assistance to thousands of civilians trapped in the city of Homs.

“There is a convoy of necessities food and non food items and medical supplies ready to go in I hope that it will be allowed tomorrow.” Mr Brahimi Sundays meeting will focus on the release of detainees held by both government and opposition groups. “The United Nations has been calling for freeing of women old people and people underage. I am looking forward to the discussions tomorrow and praying that we will have some good news.”

He said the war in Syrian has created room for terrorism to take root and expand adding that ending the war was key to defeating terrorism.

“We are addressing not only terrorism in isolation but all the aspects of the war and I hope that terrorism will be firstly reduced and ultimately ended if the war is ended and peace comes back to Syria.”