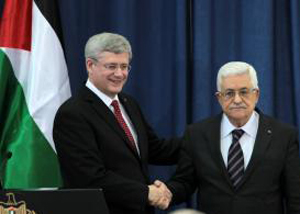 “I have the pleasure to announce today that Canada will this year give additional (financial) support for the economic development of the West Bank,” Harper told reporters, saying this was key for “social stability” and for advancing peace.

Harper was on his first official visit to Israel and the Palestinian territories, as the US-backed Middle East peace process falters ahead of an April deadline after nine months of talks. He did not elaborate on details about the aid.

Israel ally Canada was one of the few countries that opposed a successful Palestinian bid for upgraded status at the United Nations in 2012.

Abbas acknowledged “differences” with Ottawa on the question of Palestine, but said these should be resolved through discussion, and that the Canadians were entitled to their own views.

Baird met Tzipi Livni, lead peace negotiator in Israel’s cabinet, at her office in east Jerusalem, a move normally avoided by visiting diplomats because it could be seen as legitimising Israel’s controversial annexation.

Abbas also reiterated that Palestinians were committed to the agreed nine months of talks, despite Palestinian anger at Israel’s continued settlement expansion in the occupied West Bank.

The Middle East Quartet published a plan in September to revive the ailing Palestinian economy, in an effort to support peace negotiations between Israel and the Palestinians.

The three-year “Palestinian Economic Initiative”, which is to focus on private sector growth, came after international financial institutions urged Israel to loosen sanctions against the territories.