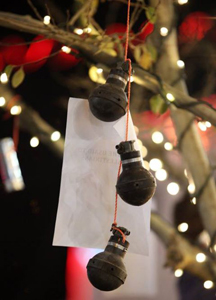 According to a report from Maan newspaper, last Tuesday Mustafa al-Arraj, a Palestinian man from Bethlehem, was detained and tortured by the goons of the most excellent Mahmoud Abbas, the protector of zionist criminals, the self-appointed dictator for life, the thieving dwarf. The “crime” of Al-Arraj was that he replaced the decorations of the traditional Christmas tree on Manger square in Bethlehem with the used spent casings of bullets, flash-bangs, used tear gas grenades and other ammunitions which are gifted by the US regime to the zionists and are used to suppress the widespread dissent against the never-ending crime spree of the zionist invaders.

During the last several decades it has been documented by activists around the world that USAID operatives have been involved in a vast array of unsavory activities, among them recruiting subversives, recruiting mercenaries, infiltrating political movements, torturing people, disappearing people, spying, trafficking children and women for prostitution, smuggling drugs, etc.

Al-Arraj was right in what he did. The true “gift” of the Americans to Palestine consists of bullets, grenades of all kinds, artillery shells etc. by the shipload, used by the jewish occupiers to perpetrate crimes against humanity and to further their genocide against us. Al-Arraj was right to protest the presence of USAID in Palestine. Disgusting criminal organizations such as USAID which front for the CIA and other crime syndicates under the pretense of “humanitarian aid” should not only be expelled from all countries where they operate, their operatives should be drowned in cesspit for the crimes they have helped perpetrate against many peoples around the world.

Mustafa Al-Arraj should be freed at once, the PA should apologize to him publicly and pay him compensation for the damage perpetrated against him, and Abbas and his coterie of israel-friendly cronies should resign.

According to Maan [3], a Bethlehem man was detained on Tuesday by Palestinian police for helping decorate a tree with used American-made tear gas canisters, stun grenades, and ammunition that had been previously fired at Palestinian protesters by Israeli forces.

Mustafa al-Arraj was detained on Tuesday morning by Palestinian police while on his way to work over his suspected involvement in the protest the day before.

Mr. al-Arraj said that the police told him he was being detained for vandalism with the “goal of destroying Christmas,” and forcibly brought him for interrogation to a Bethlehem police station. They also destroyed the decorations that had been put up the day before.

“They thought people sent us to destroy the Christmas season,” he said, pointing out that the police who interrogated him thought the tree decoration was an act of overnight vandalism.

Al-Arraj suspects that someone was unhappy about the protest and wanted to ensure that no public criticism of USAID was tolerated in Manger Square during the Christmas season. They accomplished this by spreading the rumor to police that activists were attempting to disrupt the celebrations, he believes. 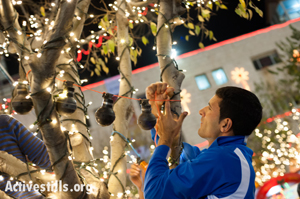 On the same day that Bethlehem’s minister of tourism noted that the US government provided $400,000 to decorate the city for Christmas, local activists brought a few more US-sponsored ornaments to show to visitors in this West Bank town at the height of its tourist season. The activists delivered used tear gas grenades that had been fired by Israeli forces at Palestinian youth less than two kilometers away in Aida Refugee Camp that same day and hung them on a tree in Manger Square. One activist from Aida Camp was arrested for his participation in the action by Palestinian police, but released after a few hours.

Most of the crowd control weapons deployed by the Israeli military against Palestinians are part of the Combined Tactical Systems (CTS) product line made by a US company, Combined Systems Inc. (CSI). Pick up a used tear gas cartridge or concussion grenade at any demonstration, and you’re likely to find the initials “CTS” stamped on them somewhere (though the rest of the labeling is typically in Hebrew). But during recent clashes in Aida Camp, Israeli forces have been leaving behind cartridges labeled completely in English. These labels contain complete CTS contact information, including the Pennsylvania mailing address, telephone, and fax numbers. They also bear that proud slogan, “Made in U.S.A.” 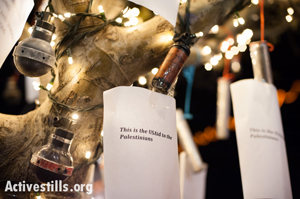 The youth who clash with Israeli soldiers stationed at the separation wall which divides Bethlehem’s land don’t need to be told that the U.S. arms Israel. Most of them know that the silenced Ruger .22 caliber rifle that was used by an Israeli sniper atop the wall to shoot two Palestinian youth last Friday is also made in the US. But because many of those not on the receiving end of such weapons are less familiar with their origins, the activists, led by members of the local Popular Resistance Committees, sought to raise broader awareness among the throngs visiting Bethlehem at Christmastime. In addition to the used grenades, the activists hung signs reading, “This is the USAid to the Palestinians,” and “US military industrial complex, stop making our Christmas hell by sending us your aid and sending Israel your guns.”

But US-made crowd control weapons used by Israel can be just as dangerous as live ammunition. The labeling on the tear gas cartridges even includes the following warning: “Danger: Do not fire directly at person(s). Serious injury or death may result.” Yet there is extensive video evidence of Israeli soldiers firing directly at people, which led to the deaths of Bassem Abu Rahmah in Bil’in and Mustafa Tamimi in Nabi Saleh. As recently as last week, dramatic target’s-eye-view footage showed an Israeli soldier firing directly at a B’Tselem photographer.

But despite such misuse of military aid —amplified on a far greater scale with more powerful hardware used in Gaza in recent years — the US government has shown little desire to hold Israel’s use of its weapons accountable to human rights standards, as required by American law. The US government now gives Israel $3.1 billion in aid every year — more aid than it gives any other country in the world — and most of it is military. Since 1948, the US has provided Israel with at total of $233.7 billion in aid, after adjusting for inflation‏. 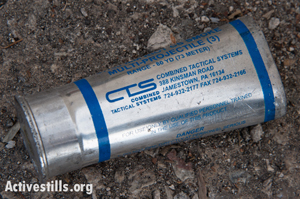 Moreover, the US also provides aid to the Palestinian Authority, though with far more conditions and as a proxy force for preserving Israeli security. US aid to the Palestinian Authority has averaged $500 million, including approximately $100 million in non-lethal security assistance. Indeed, the youth from Aida Camp often face PA riot police guarding the separation wall, sometimes even standing between camp youth and Israeli soldiers.

Unlike US aid to Israel, according to the Congressional Research Service, the PA’s “aid is subject to a host of vetting and oversight requirements and legislative restrictions.” Congress also frequently punishes the PA by withholding aid. In 2011 the government withheld as $200 million after the PA first sought statehood recognition at the UN, and again in 2012, when Palestine successfully achieved UN “non-member state” status. Yet despite Israel’s repeated violations of UN resolutions, international law, and US policy, its military aid continues uninterrupted, and has even increased under President Obama.