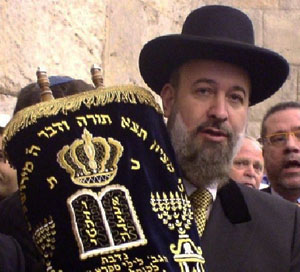 Former Haredi (Ashkenazi) Israeli chief rabbi Yona Metzger was arrested on suspicion that he received bribes, as well as committed money laundering and fraud, during his time as Ashkenazi chief rabbi.

The Israel Police National Fraud squad has been investigating Metzger for several months. The Police believes Metzger accepted monetary and material bribes in exchange for advancing the interests of several non-profit organizations. The amount of the bribes equals several million shekels, according to reports. Metzger also is accused of trying to silence witnesses and interfere in the investigation, according to reports. It was decided to take Metzger into custody because the investigation has made significant progress, with strong evidence available to back the allegations, police said.

Metzger has an alleged history of sexual abuse, as well, allegedly molesting adult males. In June 2013, he was under house arrest for 15 and had to step down as Ashkenazi Chief Rabbi of Israel.

When he was rabbi of North Tel Aviv, Metzger also reportedly extorted brides and grooms at their weddings, forcing them to pay large fees to him to perform the marriage or, he sometimes threatened, he would leave them in the lurch. State-funded rabbis are prohibited by law from charging to perform religious services like weddings. Metzger also performed several marriages per night and allegedly sometimes had his driver forge signatures on ketubot.

According to a report was released by Maariv newspaper and re-published by Haaretz [1],

“David”, a secular Jew, alleged that in the late 1980s at a wedding where Metzger officiated, the rabbi touched his chest and his arms. David also alleged that Metzger placed his hand under his shirt during a conversation between the two of them. At the beginning of April, a religious Jewish man told the newspaper that in the recent past he met with the rabbi for a halakhic consultation and at the meeting the possibility of his professional advancement was discussed.

The complainant alleged that at the rabbi’s request, he removed his shirt and the rabbi groped his chest and arms. Maariv’s research for the story led to another man who told of a similar event that occurred between him and the rabbi. According to the Maariv report, the incident with the third man was brought to the attention of Israel’s then Sephardi Chief Rabbi Eliyahu Bakshi-Doron in 1998, when Rabbi Metzger was a candidate for the position of Tel Aviv chief rabbi. Rabbi Bakshi-Doron was the head of a disciplinary committee that was established to discuss allegations of marital contracts (called ketubot in Hebrew) forged by Rabbi Metzger. However, the committee decided not to publicize the complaint.

Metzger served as chief rabbi from 2003 [2]until earlier this year. According to Haaretz newspaper, Metzgar was elected chief rabbi in April 2003, and was also named a dayan (rabbinic judge) on the Supreme Rabbinical Court. In 2005 he was investigated on suspicion he had received tens of thousands of shekels in benefits from Jerusalem hotels that accommodated him and his family during the holidays, even though the state was renting him a luxury apartment in the capital.

Back in 2003, there were reports that Metzger had allegedly sexually harassed other men. Then-Attorney General Elyakim Rubinstein decided not to launch a criminal investigation. Two of the four men who had told the Maariv newspaper that Metzger had harassed them took polygraph tests and were found to be telling the truth. Metzger, however, presented his own polygraph tests that showed he was telling the truth and that no harassment had ever occurred.