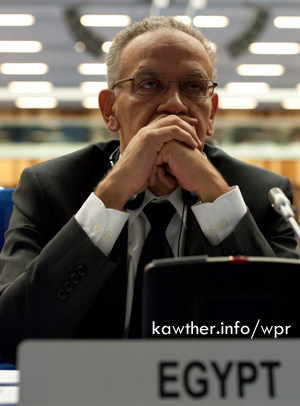 One hundred fourteen (114) member states to the IAEA voted today Sep, 20 2013, on the last day of the 57th General Conference held in Vienna, in favour of a draft resolution submitted by Egypt regarding the application of IAEA safeguards in the Middle East. 12 countries abstained and there were no rejections.

The Egyptian draft resolution was discussed in the morning session. It passed by a majority of the votes as it did not include any explicit reference to Israel.

Egypt submitted its draft resolution on the application of IAEA safeguards in the Middle East (GC(57)/L.1) to the 57th General Conference of the IAEA, seeking to materialize the goal of a nuclear-free region.

The draft resolution calls upon all states, especially those with a special responsibility for the maintenance of peace and security, to render all assistance to the Director General by facilitating the implementation of this resolution.

The 13-article draft calls on all Middle East countries to join the Nuclear Non-proliferation Treaty and to fullfill commitments towards the application of the IAEA safeguards as well as to cooperate with the IAEA. 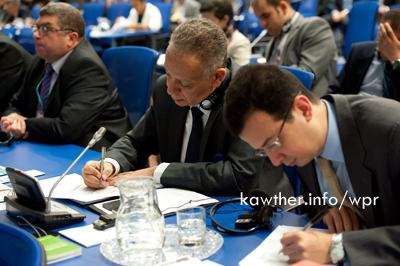 On Sep. 18 2013, Egypt delivered a statement and requested that the Director General submit to the Board of Governors and to the General Conference in 2014 a report on the implementation of this resolution, and to include in the provisional agenda for that session an item entitled “Application of IAEA safeguards in the Middle East”.

The adoption of the Egyptian draft resolution was received with a very negative attitude by the delegations of the USA, israel, Canada and their allies, as could be concluded by the soured expressions on the faces of these delegations after the passing of the resolution introduced by Egypt.