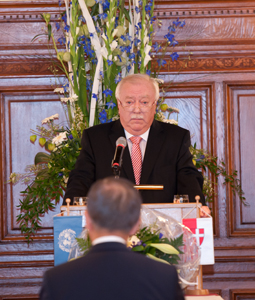 UN Secretary-General Ban Ki-moon appealed for more time for an inspection team to complete its investigation of the alleged chemical weapons attack in Syria, while answering journalist’s questions at the city hall of Vienna on Thursday, August 29, 2013

He said: “Yesterday when I was addressing the Peace Palace [in The Hague] I appealed that diplomacy should be given a chance, that peace [should be] given a chance. It is important that all the differences of opinions should be resolved by peaceful means and through dialogue and I am going to continue to work on this principle.”

Ki-moon said: “Our experts are still on the ground investigating the uses of chemical weapons. I said the use of chemical weapons by anyone, for any reason, under any circumstances are crimes against humanity and that must be held accountable and we are working very hard and I have been working with leaders of the world how we can keep peace and facilitate dialogue, that is my duty.  Again I am ready to answer your questions.” 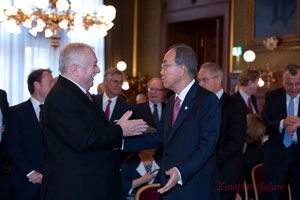 About his latest talks with President Obama, Ki-Moon said: “Well this is what the White House has to announce in coordination with the United Nations. It’s true that I have spoken to President Obama yesterday. We discussed how the UN and the world can work together particularly with the United States, how we can expedite the process of the investigation. I have also expressed my wish that this investigation team should be allowed to continue their work as mandated by the Member States and I told him that we will surely share the information and the analysis of samples and evidence with Members of the Security Council and UN members in general.”

Ki-moon stated that the UN the activities of the UN team in Syria will last until tomorrow Friday, August 20 2013. Answering the question of a journalist, “Could the team’s stay in Syria be extended?” the Secretary General stated:

“They will continue their investigation activities until tomorrow, Friday, and will come out of Syria by Saturday morning and will report to me as soon as they come out of Syria and that is why I have cut short my visit to Austria and I am very much sorry for this inconvenience caused to President Fischer and other dignitaries of this government. I have also spoken to President Barroso of the European Commission that our forum the UN European Alpbach Forum I am not able to participate. I asked him to chair this meeting. He understood. I am grateful that President Fischer and President Barroso of the European Union have fully understood my situation”. Mayor and Governor of Vienna Dr. Michael Häupl granted SG Ban Ki-moon one of the highest decorations of the City of Vienna, namely the Grand Decoration of Honour in Gold for Services to the Province of Vienna.