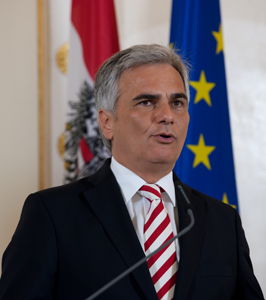 Syria was the major subject of an extensive discussion between politicians during the visit to Austria of United Nations Secretary-General Ban Ki-moon, which takes place between 28 and 31 August 2013.

After a work meeting with the Secretary General Ki-Moon and President Heinz Fischer, which was held at the office of the President, Chancellor Werner Faymann stated: “The Austrian Government has agreed that a military strike on Syria is not a contribution to good policy development. Therefore Austria will stay as a neutral country with its voice for a peaceful as the only solution for the conflict”.

He added: “It’s a race against time, and we hope that in view of the potentially devastating consequences of a military strike, this position will gain the upper hand for a political solution”.

Secretary General Ki-Moon stated: “We had a very useful exchange of views with the President and the Chancellor on how to address the situation in Syria. We are of the opinion that the situation should be resolved in a peaceful way through dialogue. At the same time, and while the United Nations investigation team is now on the ground they should be allowed to conclude their investigation activities, and I am going to receive their report as soon as possible. I am thus now cutting short my visit to Austria, unfortunately, and I appreciate President Heinz Fischer’s very 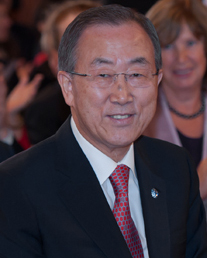 kind understanding of (this) inevitable situation, and that I will not be able to participate in the Alpbach Forum together with the President”.