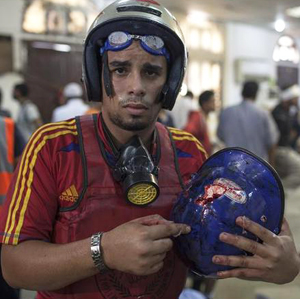 According to فاث Freedom and Justice Party in Egypt, at least 2200 people were killed and 10,000 injured on Wednesday in a crackdown that turned into a bloodbath after Egyptian military snipers and security forces stormed two huge Cairo camps of protesters demanding the reinstatement of ousted president Mohamed Morsi, the first democratically elected president of Egypt.

Among the dead are Asma, the 17-year-old daughter of Ammar Beltagi, head of the Muslim Brotherhood’s Freedom and Justice party, who was shot and killed in the Rabaa al-Adawiya sit-in in Nasr City, Mr. Mick Deane, a veteran Sky News cameraman for the UK-based Sky News channel, and Habiba Ahmed Abed Elaziz, a 26-year-old staff reporter of XPRESS, a sister publication of Gulf News, who were shot and killed while covering clashes.

A state of emergency has been declared across Egypt. The state of emergency will begin at 4pm local time (14:00 GMT) and will last for a month, according to a statement released on Wednesday afternoon. A curfew has also been imposed in Cairo and nine other provinces, starting from 7 pm local (17:00 GMT) until 6 am (04:00 GMT).

At least 525 people were killed in Egypt on Wednesday, including 202 protesters in a Cairo Islamist sit-in, according to a health ministry official statement to AFP.