Catherine Ashton, the High Representative of the European Union for Foreign Affairs and Security Policy and Vice President of the Commission issued the following statement today: “I am following with great concern the ongoing situation in Egypt. Confrontation and violence is not the way forward to resolve key political issues. I deplore the loss of lives, injuries and destruction in Cairo and other places in Egypt. I call on the security forces to exercise utmost restraint and on all Egyptian citizens to avoid further provocations and escalation.

The country’s democratic future will depend on a dialogue among all concerned aimed at overcoming differences in an inclusive process of political reconciliation, with a fully empowered civilian government and functioning democratic institutions.

Key elements for the way ahead have been debated already, they include upholding the rights of freedom of expression and peaceful protest, protecting all citizens and enabling full political participation. At the same time all sides must take responsibility for the orderly conduct of demonstrations and an end to incitement.” 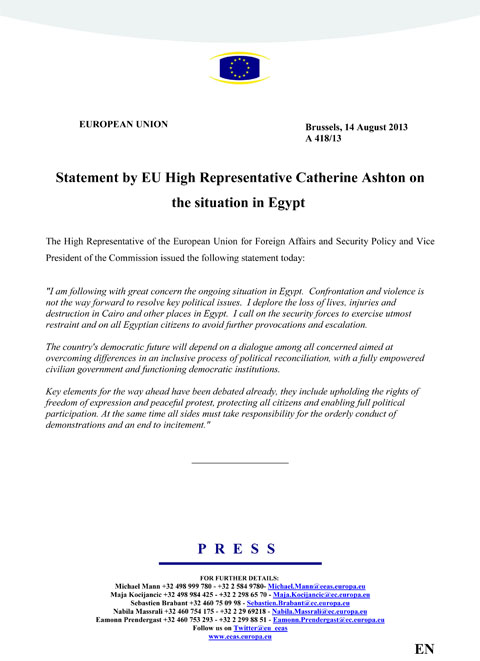