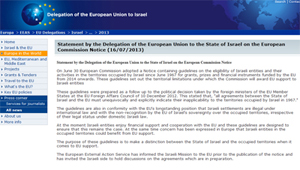 July 16 2013 – The European Union [2] (EU) Tuesday said that they will bar all 28 member states from dealings with the jewish zionists settlements in the occupied Palestinian territories in the West Bank, including the occupied east of Jerusalem. The EU defined the territories occupied by Israel since June 1967 as the Golan Heights, the Gaza Strip and the West Bank, including East Jerusalem.

The directive, due to be published on Friday and take effect from 2014, forbids EU member states from funding or dealing with Israeli settlements and settlers in the occupied territories. The aim of the guidelines, is to ensure the respect of EU positions and commitments in conformity with international law on the non-recognition by the EU of Israel’s sovereignty over the territories occupied by Israel since June 1967.

The EU does not recognize Israel’s sovereignty over any of these territories and does not consider them to be part of Israel’s territory, ‘irrespective of their legal status under domestic Israeli law,’ it said. It has also made it clear that it will not recognize any changes to pre-1967 borders, other than those agreed by the parties to the Middle East peace process.

Statement by the Delegation of the European Union to the State of Israel on the European Commission Notice – On June 30 European Commission adopted a Notice containing guidelines on the eligibility of Israeli entities and their activities in the territories occupied by Israel since June 1967 for grants, prizes and financial instruments funded by the EU from 2014 onwards. These guidelines set out the territorial limitations under which the Commission will award EU support to Israeli entities

These guidelines were prepared as a follow up to the political decision taken by the foreign ministers of the EU Member States at the EU Foreign Affairs Council [4]of 10 December 2012. This stated that, “all agreements between the State of Israel and the EU must unequivocally and explicitly indicate their inapplicability to the territories occupied by Israel in 1967.”

The guidelines are also in conformity with the EU’s longstanding position that Israeli settlements are illegal under international law and with the non-recognition by the EU of Israel’s sovereignty over the occupied territories, irrespective of their legal status under domestic Israeli law.

At the moment Israeli entities enjoy financial support and cooperation with the EU and these guidelines are designed to ensure that this remains the case. At the same time concern has been expressed in Europe that Israeli entities in the occupied territories could benefit from EU support.

The purpose of these guidelines is to make a distinction between the State of Israel and the occupied territories when it comes to EU support.

The European External Action Service has informed the Israeli Mission to the EU prior to the publication of the notice and has invited the Israeli side to hold discussions on the agreements which are in preparation.