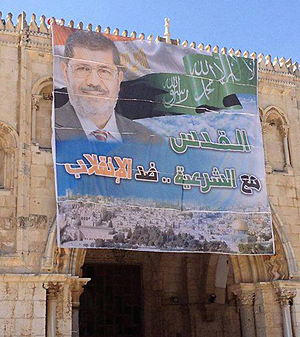 A huge banner bearing the image of ousted Egyptian president Mohamed Morsi and Hamas flags greeted the tens of thousands of Muslim worshipers who arrived at Al-Aqsa Mosque for the first Friday of Ramadan.

Palestinian worshipers hung a huge banner on bearing the image of the ousted Egyptian president Mohamed Morsi from one of the external walls at the entrance of Al-Aqsa Mosque plaza. The banner read, “Jerusalem – supports legitimacy – against the coup”, a reference to the former Egyptian president’s recent overthrow by the military.

On Saturday July 13 2013, over 12,000 Palestinians from Arab-Israelis held a pro-Morsi demonstration in the Arab town of Kafr Kanna in Israel.

The Palestinian Authority strongly criticized Saturday raising the picture for the ousted Egyptian President Muhammad Morsi at al -Aqsa Mosque in Jerusalem and called for keeping the Muslim holy site away from inter-Arab conflicts.

The Palestinian News Agency Wafa released that the “minister” of Waqf and Religious Affairs Mahmoud Habbash warned against using al-Aqsa Mosque and Jerusalem as ground for inter-Arab conflict. He said the Mosque and Jerusalem should remain a symbol for Arab and Muslim unity, and not for division.