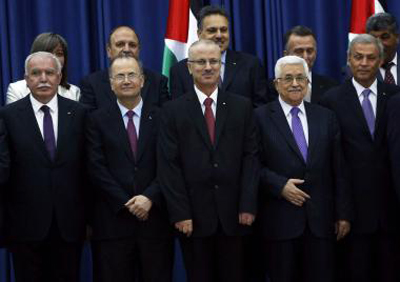 RAMALLAH, June 6, 2013 – Kawther Salam – the 15th illegal ministerial cabinet of the Palestinian Authority, headed by “prime minister” Rami Hamdallah [1], (English professor) was established and sworn in yesterday Thursday before “president” Mahmoud Abbas, who has been tenured by the occupation since presidency expired in September 2009, and few members of the PLO Executive Committee.

The PLO Executive Committee is a group of Palestinians most of them are old, sick, weak, corrupt blood suckers who have been living the high life in posh locations around the world on the shoulders of the Palestinian people while collaborating with the enemy.

Nobody has been able to find a way to get rid of these worthless old gentlemen during the past decades, as the surviving members of this committee of sad renown administer the unofficial PA treasury and are now in bed with Abbas: they originally divided and sold out the occupied Palestine in coordination with the occupation and Abbas is enforcing this betrayal.

Since the establishment of the PA in 1994, it has formed 15 governments were a total of 374 Palestinians were appointed to a position of minister. For 4,4 million Palestinians, 2,7 million live in the occupied west bank and 1,7 in the Gaza Strip. 374 minister have been appointed by the PA under the israeli occupation, so for 10 thousand Palestinians there has been a Palestinian Minister of something, and for every 50 Palestinians there is a currently a thug deployed.

The excessive number of ministers means waste of public money proceeding from Palestinian taxes and from outside donations. It detracts from the prestige of the Palestinian Authority, it is a show of it’s inability and the confusion of the president and the PA leadership, and a symptom of the lack of a clear vision for the Palestinian future by these bench warmers.

The newly formed cabinet kept the corrupt foreign “minister” Dr. Riyad Al-Malki, already foreign minister in the government of Dr. Salam Fayyad, who is also accused of corruption, among other things for drowning Palestinian embassies in corruption by posting uneducated and incapable personal appointees to sensitive positions and granting diplomatic passports to friends.

“President” and Dear Leader Abbas issued a decree giving confidence to the new cabinet, basically a group of aidés to Abbas. The new cabinet was formed in accordance with Abbas’ and Fatah party, who want to get their hands on the vast sums of money grants made to the Palestinian people. It works without reference to laws or oversight from the parliament, under corrupt economic and security policy conditions. It must be added that under Abbas and the Palestinian Authority, the public freedoms of Palestinians have declined significantly while the violations of human rights have increased significantly, the prices for everything and the taxes have increased, while the PA controls everything and turns its back to the Palestinian people and their needs.

The new cabinet is composed of 24 people, including the prime minister, his two deputies and the cabinet secretary. It includes eight new ministers and three women ministers from the outgoing government.

Following is the composition of the new ministerial cabinet: