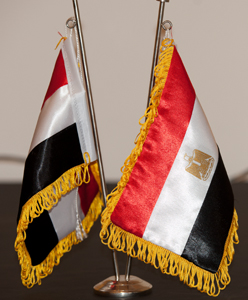 Only 598 voted of 1510 Egyptian, the total number of persons who have the right to vote on the new Egyptian constitution, 314 Egyptian voted with NO and 256 voted with YES for the new constitution proposed by President Morsi. 25 votes were canceled and two votes were invalid. These were the results of the vote at the Egyptian Embassy in Vienna.

According to our sources, a complaint was submitted to the Egyptian Foreign Ministry, accused the Egyptian Embassy staff to Austria with discrimination in dealing with journalists. An Egyptian diplomat said earlier that ONLY the Austrians journalists of EGYPTIAN ORIGINS are allowed to cover the referendum on the Constitution and to monitor the vote-counting process at the Embassy.

In Vienna, the Egyptian opposition had called on their followers to vote “No”. They criticized the constitution as Islamist dominated and see the rights of minorities are not sufficiently protected. These include in particular the Christians in Egypt represent ten percent of the population.

In Egypt, human rights groups spoke of irregularities in the referendum, including bribery and illegally extended opening times of polling stations. In a joint statement from seven organizations, the organizers were asked to avoid these mistakes in the second round and repeat the first.