Barbara Prammer President of the Austrian National Council stated that 35 Million Girls Worldwide Not in School during the opening session of mobilizing resources to empower women and girls: a dialogue among policy makers at UNOV in which experts from governments, the United Nations, civil society, parliaments, women’s organizations and the private sector discussed ways to advance gender equality and empowerment of women.

Delegates have discussed how the gender equality and women’s empowerment agenda can be promoted in international development cooperation and in the post-2015 development agenda under discussion, which will serve as the next international framework building upon the current Millennium Development Goals. The meeting will provide an opportunity for key stakeholder groups to explore how best to nurture gender equality and the empowerment of women in light of emerging sustainable development challenges. 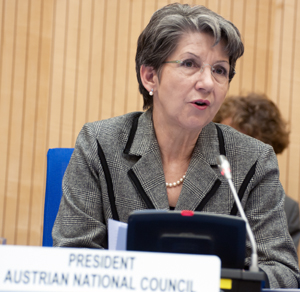 She added: “Therefore the path we now take has serious implications for the world we will inhabit in the years to come. Now is not the time to disengage. It is the time to make sure we actually deliver on the Millennium Development Goals: Give children and pregnant women a chance at survival. Make sure children are in school. Make sure women have the same opportunities as men; protect the environment – and ultimately, end poverty”.

Prammer asked: What are the challenges facing Gender Equality? She gave several examples stating that the World Development Report 2012 draws attention to these facts and that there are still 35 million girls worldwide not in school. 4 million “newly missing” women annually
means that millions of girls and women go “missing” each year due to pre-natal discrimination or excess postnatal mortality. Almost all of them (85% or 3.3 million) in China, Sub-Saharan Africa and India.

There are wage gaps that average 20 per cent, along with gaps in labour force participation and there are an estimated 510 million women who will be abused by their partners in their lifetime

Prammer said: “in my capacity as Speaker of the National Council of the Republic of Austria I will continuously promote one certain indicator of the third MDG.It is the participation of women in political decision-making committees at all levels, from the informal and local level to the highest levels of parliament and government.

Concerning the representation of women in politics, the Austrian lower house with 27.9% and the Federal Council with 31,1 % is in place 35 out of 162 in the ranking of the Interparliamentary Union. This is relatively good but still not satisfactory.

The highest level of women´s representation is found in the Nordic countries. Among developing regions, Latin America and the Caribbean continue to rank the highest, with a 23 per cent average. Women are elected in greater numbers in systems of proportional representation than they are in majority electoral systems. The use of special measures or quotas is also an important factor. Of the 59 countries that held elections in 2011 for lower or single houses, 2 had implemented special measures favouring women, and electoral quotas were used in 17 of those countries. Where quotas were used, women took 27.4 per cent of seats, as opposed to 15.7 per cent of seats in countries without any form of quota.

That is why I never tire of emphasizing that quotas are tried, tested and useful instruments to ensure women´s participation in politics.

Our participation has to be ensured because I am convinced that the proportion of seats held by women in national parliaments is a key factor for women´s involvement in decision-making. 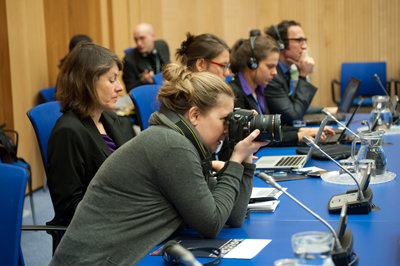 The simple presence of women within these traditional male institutions presents an important opportunity to assess the role of women within the political system and the status of women throughout society. Male and female legislators must work together to solve the problems in their countries. And women must be encouraged, empowered and supported to become strong leaders to successfully address those problems and to build strong, sustainable democracies.

As a staunch parliamentarian I would like to emphasize here that achieving the MDGs is not the responsibility of the executive branch of government alone. A part of parliament’s crucial function is to hold the executive accountable and to ensure that the executive fulfills its mandate. The fulfillment of these functions is imperative to the achievement of the MDGs.

In this context, I would like to highlight also the importance of Gender Budgeting. I am proud of the fact that Austria has written this principle in its constitution, and I am glad that you will hear about this more at tomorrow’s panel.

The sessions on your agenda for the next two days are all equally important, but above all there is one common objective:

It is to explore ways to anchor gender equality and the empowerment of women and girls at the centre of a future post-2015 UN development agenda.

Gender equality has long been recognized both as a human right and a core development goal; therefore the post-2015 global development agenda must not only address the elimination of specific gender gaps, but also transform the structural factors that underpin the widespread persistence of gender inequalities, gender-based violence, discrimination and unequal development progress between women and men.