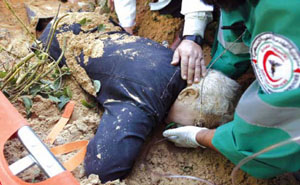 During four days of the israeli zionist war crimes in Gaza, 40 Palestinians have been killed and over 400 injured, among them many in serious conditions, one third of the killed and injured Palestinians were children. Several houses and buildings have been completely destroyed and leveled to the ground, among them the building of the Prime Minister offices.

In the West Bank, demos broke out in support to Gaza against the Israel aggression and war crimes. Dozens of Palestinians were injured, among them several seriously like Ahmad Suboh who suffered serious head injuries. At least 12 demonstrators were arrested by the Israeli occupation forces. 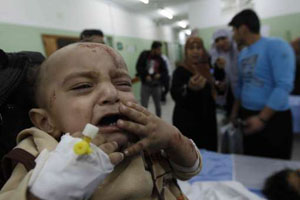 In Gaza and according to a press release from Al Mizan for Human Rights: (Note: the number of the causalities, the murdered and injured Palestinians, increased after this press release). Israeli occupation forces (IOF) launched an air strike on a house, in a serious escalation of its aggression on the Gaza Strip.

IOF warplanes struck and completely destroyed the building hosting the Council of Ministers in Gaza City. As of the time this press release is issued, IOF attacks have left 37 Palestinians killed; including 6 children and 2 women, and 398 injured; including 133 children and 67 women. This escalation of IOF attacks and the nature of their targets raise the concerns that military operations are developing into an operation similar to Operation Cast Lead in December 2008 and January 2009. Al Mezan condemns the IOF violations of international law and calls for international intervention to protect Palestinian civilians.

According to the monitoring of Al Mezan Centre for Human Rights, at approximately 6 am on 17 November, IOF warplanes fired three missiles at the 2-story house of Solaiman Salah, 59, which is located near THE Khlofaa’ Mosque in the densely populated Jabaliya refugee camp, in the North Gaza district. The house was inhabited by 12 persons; six of whom children and 4 women. The attack destroyed the house completely. 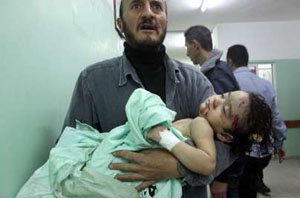 Solaiman Salah and his son, Mohammed, 13, sustained critical injuries. His wife, Fayza Salah, 53, and her son Zakariya, 19, and daughter, Safaa, 23, sustained moderate injuries. Al Mezan filed workers noted that the northern part of the family house collapsed completely, but the back part of the house remained standing with partial damage. The family were in the back part of the house when the attack took place. Al Mezan’s field workers witnessed the rescue operation at the house by the civil defense and neighbors. Two women and two children were rescued from under the rubble. This attack damaged 10 adjacent homes; 4 of which seriously, and left 33 injuries; 13 of them children and 7 women.

IOF continued its violent attacks on Gaza throughout the day. Several attacks targeted government offices located in residential neighborhoods; including an air strike on the building hosting the Council of Ministers. These attacks have resulted in damages to hundreds of homes and civilian institutions, such as schools, mosques and NGO offices. 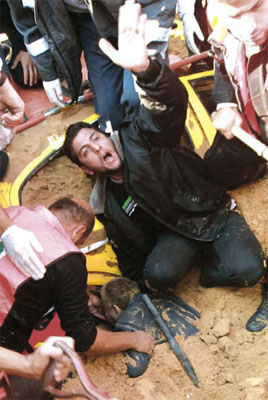 Al Mezan highlights that IOF’s attacks as Israel’s over five-year-old closure and naval blockade of the Gaza Strip continue. The situation of basic services in Gaza has deteriorated seriously during these years; especially for the health, water and sanitation sectors. The Israeli closure to the Gaza’s last crossing point, through which trade and humanitarian aid can be supplied, will further deteriorate the humanitarian situation in

IOF has also intensified the attacks on smuggling tunnels, which have allowed for basic commodities to enter Gaza under the closure. Fuel supplies are threatened and, if cut, will spark an immediate humanitarian crisis. Water, sanitation, and health sectors depend heavily on fuel supplies under the lack of electricity in the Strip.

As IOF continues its aggression and its disregard to its obligations under IHL by targeting civilians and civilian objects, Al Mezan asserts that IOF commits grave breaches of international law that could amount to war crimes. Al Mezan therefore reiterates its strong condemnation of the IOF aggression on the Gaza Strip and deplores the inability of the international community to intervene to halt the IOF violations of international law.

Al Mezan strongly denounces the statements made by the EU, the Quartet, and several states in Europe and the US, which justify Israel’s aggression on the ground that Palestinian armed factions initiated the attacks on Israel. This position is both based on false information and condoning on aggression by an occupying Power in ways that violate international law. 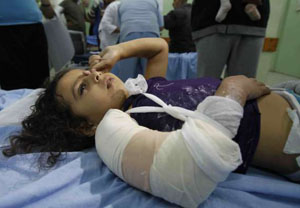 Al Mezan reiterates its call on the international community; including international humanitarian organizations, to ensure that the IOF abides by the obligation to allow and facilitate the effective entry of basic needs into the Gaza Strip