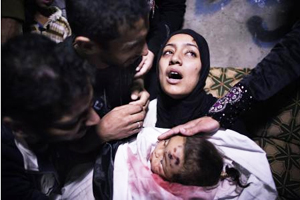 Al Mezan condemns IOF escalation [2] and calls for urgent international intervention. The Israeli occupation forces (IOF) escalated its attacks on the Gaza Strip today. Twenty-six air-strikes and dozens of artillery attacks were launched on Gaza during the evening hours. These attacks followed an air-strike in which Ahmed Al-Jaa’bari, leader of Hamas military wing, was killed at 3:50 pm in Gaza city.

Most IOF attacks against resistance members and locations occurred in residential areas; therefore, most of the casualties and injuries were among civilians. According to information collected by Al Mezan Centre for Human Rights in Gaza, seven people were killed and 59 injured in the IOF attacks. Among those killed were two children and a woman. Sixteen of the injured were children and eleven were women. The persons who were killed were:

According to latest report from Gaza, the IOF continued aerial attacks on the central Gaza Strip late Friday, killing four Palestinians including a Hamas leaders. The attack on al-Maghazi refugee camp, which killed al-Qassam Brigades leader Ahmad Abu Jalal and three others, brought the death toll to 28 since Israel’s assault on Gaza began Wednesday.

Extra-judicial assassinations against resistance members occurred in residential areas. The IOF opened artillery fire directly on houses; including the house of Al-Mashharawi family and Arafat family, in which multiple civilian casualties and injuries occurred. Hundreds of houses and apartments were damaged around the Gaza Strip due to the heavy-missile attacks by the IOF.

The past five days saw a serious escalation of the hostilities in Gaza. On 11 November 2012, Palestinian resistance members fired an anti-tank rocket at an Israeli military jeep. The IOF retaliated by attacking a wake-house and a group of young civilians who were playing football in the east of Gaza city. Attacks continued since then, until today morning when the news reported a truce brokered by Egypt. However, the IOF attacks starting today afternoon may lead to the renewal of the hostilities in the coming days.

Al Mezan strongly condemns the Israeli attacks on the Gaza Strip. IOF attacks continue to fail to observe the relevant rules of international law; therefore, cause death and injury to civilians and destroy civilian objects in violation of international law. Al Mezan calls on the United Nations Secretary-General and international community to intervene urgently and bring this Israeli escalation to an end. Israeli large-scale military operations against Gaza; such as Operation Cast Lead in the 2008/9 winter, have always failed to ensure due respect for civilians and civilian property. Al Mezan’s documentation of the IOF attacks during this week indicate that such violations by IOF persisted, as IOF violated the prohibitions against targeting civilian persons and objects; including extra-judicial executions.

Al Mezan highlights that the silence of international community will only encourage the IOF to continue these violations of international law. Efforts to ensure respect to human rights and international law will save lives and evade civilians further hardship; especially for Gaza’s population who have been living under Israeli closure and violence for years.

Al Mezan therefore reiterates its calls on international community; especially the UN and EU, to exert pressure on Israel; the occupying Power, to halt its attacks on Gaza, and to ensure full respect for international law. As IOF violation of IHL continue, Al Mezan also calls for the convening of the conference of the States Parties to the Fourth Geneva Convention Relative to the Protection of Civilians in Times of War (of 1949) to consider the serious violations of the Convention and the two Protocols Additional to the Geneva Conventions in the occupied Palestinian territory.