For the first time in over 20 years, sirens were heard in Tel Aviv and israeli Channel 10 said that the people of Tel Aviv has been asked to stay in closed in shelters and in fortified areas, and that Bibi the prime minister had been forced to hide in a shelter located under his office in Tel Aviv, that several rockets landed in biggest city and that others landed in the Rishon Lezion area. Resistance rocket also affected a factory in the so – called Sha’ar HaNegev Regional Council area and caused heavy material losses. Several rockets fell in the Beer Al-Saba’a (Beersheba), Netivot and Eshkol colonies where home sustained direct hits. Three israelis died at the Kiryat Malachi colony. 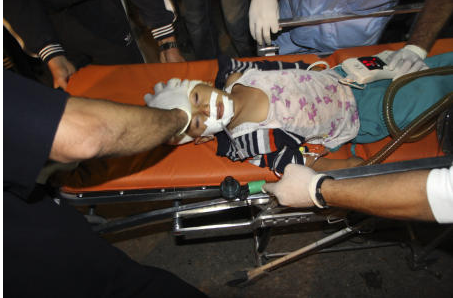 Loud explosion were heard in Tel Aviv and the news spoke about the fall of a “Fajr-5” missile in the Gush Dan area. Three Israeli soldiers were wounded after the fall of a rocket near to them while shooting rockets at random into the Gaza Strip, 76 israelis were wounded.

In Gaza 16 Palestinians were murdered, among them 6 children, baby girl Hanin Tafish of age 10 months was killed. Also, a daughter of the journalist Sami al-Ajrami, of age 10 years was injured seriously, and dozens more were injured.

Heavy Israeli shell at Gaza from all directions and attacks by the israeli air force continue from the sky, while the “president of Palestine” Mahmoud Abbas and his military gang are busy collecting supposed Hamas politicians in the West Bank, jailing and torturing them, as well as anybody opposed to their decrepit regime.

Palestinian sources reported last Monday November 12 2012 that the so-called “Palestinian Authority security forces”, which are supported, financed and trained by USA, EU, other western countries and Israel, transferred today two political prisoners who are arbitrarily detained at PA prisons in the city of Hebron, to hospitals after the deterioration of their health due to hunger strike.

According to the Palestinian sources, political prisoners Raed Al-Sharbati from Hebron was transferred to the hospital after the deterioration of his health at the “preventive security” jail due to being since three days on hunger strike. Al-Sharbati is a political prisoner who spent several years in zionist detention and had been released some days before the PA arrested him again.

Mr. Ayoub al-Awawdeh, another victim and political detainee at the detention center of the PA intelligence service, was also transferred to a hospital after his health deteriorated because of being on hunger strike at the jail for the third day. Mr. al-Awawdeh was also captured by the PA forces three days after the zionists released him from the detention on unknown grounds. His mother had died while he was jailed by the israelis.

Israel and the Palestinian Authority are working together on “rotating arrest” of Palestinians in accord to secret collusion agreements signed between them which have as purpose spying on the Palestinian resistance and repressing any political opponents to the occupation, what is contrary to international provisions and regulations on the freedom of belief and political opinion.