The murder of the US Ambassador to Libya John Christopher Stevens, due to riots after the offensive film attacking Islam’s Prophet Muhammad has many signs which warrant pointing fingers towards Israel. (Pic. Credit: AFP).

Without hesitation Israel declared through its official media that “Sam Bacile”, 56-year-old author identifies as an Israeli Jew, and he says that he believes that his film will help Israel to expose the flaws of Islam to the world [2].

At the same time official Israel is concealing information that filmmaker “Bacile” must have served with the Israeli army intelligence. In Hebrew media, “Bacile” presents himself as fluent in Arabic, what is to my knowledge almost exclusive to intelligence operatives in israel.

The media of the State of Israel stated that filmmaker “Bacile” went into hiding on Tuesday after his movie attacking Islam’s Prophet Muhammad sparked angry assaults by Muslims on US diplomatic missions in Egypt and in Libya, where the US Ambassador Chris Stevens became one of four Americans killed in the attack.

What the speaker did not state for foreign audiences was that Israeli zionist intelligence had protected the filmmaker since the beginning and that after having accomplished his mission. He is probably now back in his Israel enjoying full protection in Tel Aviv or Herzliya or somewhere else under a pseudonym.

There are suspicions that “Bacile”, now in Israel, carried a passport with another name. The elements of the Israeli zionist mossad and intelligence customarily carry several falsified passports under different nationalities and names. The suspicion that the film was made not by “Bacile” alone and on his own initiative, but that the whole thing was a premeditated operation of the Israeli zionist intelligence, designed to have exactly the effects it has had until now.

According to this website (http://www.breitbart.com/Big-Government/2012/09/12/CBS-Reports-Libyan-Security-Forces-Showed-Militants-Where-to-Attack-Our-Ambassador) “the Libyan security forces hired to protect the American consulate in Benghazi, Libya moved Ambassador Chris Stevens to a second building within the consulate, then told the militant crowds where he was”. Libya has been essentially under the control of mossad since Gadhaffi was deposed by NATO-backed terrorists. 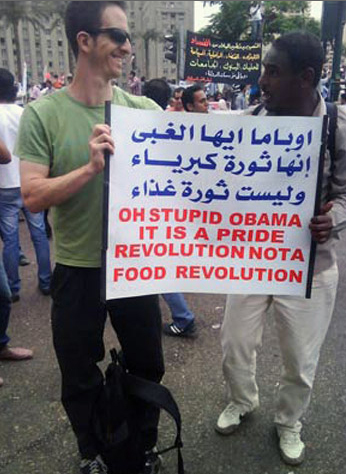 [3]The attack on the consulate in Benghazi reminds us of the American-Israeli mossad agent Ilan Chaim Grappelli/Grapel [4], (אילן גרפל ), who was captured in Egypt during the revolution for inciting people to commit acts of violence.

Grapel was a war criminal [5] who participated in the atrocities of the Lebanon “second war” in 2006, a former paratrooper who infiltrated the Egyptian revolutionaries and was causing trouble, inciting his acquaintances to perpetrate criminal acts against police stations and the military, spying on the military and the revolutionaries, photographing people and reporting to the Mossad, distributing money to some Egyptians and recruiting them to cause chaos, to steal and to sabotage public infrastructure in the country. Grapel had also been organizing a series of protest movements and preparing them to disobey orders of the military authorities after the overthrow of  President Hosni Mubarak.

What Grapel did was the same scenario as in Benghazi, Libya. It is more than plausible that israeli elements had infiltrated the angry Libyan masses after showing them the film and incited them to shoot at the American embassy, where Ambassador Stevens and his team were killed. Such “false flag” attacks are the hallmark of mossad, which always play the same dirty games, putting oil on the fire, kindling hatred and inciting the unaware to perpetrate crimes. 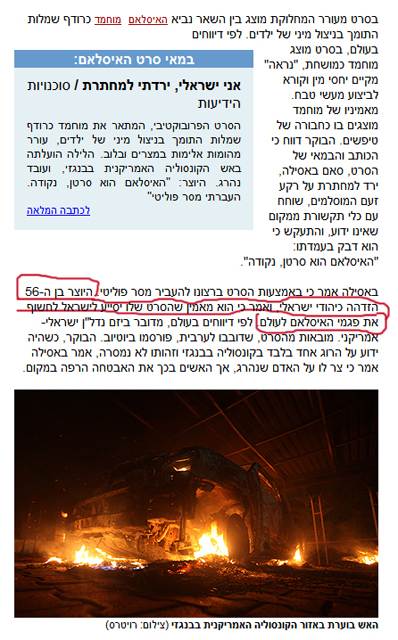 Simply said, the offensive film made by an extremist zionist jew from the USA together with an Egyptian Copt served to kindle the flames of hatred in a region where restraint is almost unknown, preparing the terrain for “justifiable” violence.

The murder of the American Ambassador and three of his team was the logical consequence if one takes in account the guidance of the Libyan “security” team hired by the embassy. In sum, all well done, a plausibly deniable operation cooked up in the hellish kitchen of the Israeli intelligence, against their supposedly best friend and nearest ally.

According to what can be read, Ambassador Stevens had previously been a teacher in Morocco, he spoke fluent Arabic; he was very open towards the people and did not host racist prejudice against Arabs. Knowing the Israeli mentality, this may have been enough for him to become hated and ultimately marked as disposable at the zionist jewish-dominated US Department of State.

Another possible background for this operation, also from my knowledge of the Israeli zionist mentality, would be that they don’t know what to do to sow dissent in the Arab world since Morsi and the Muslim Brotherhood won the elections in Egypt. This is strange because Morsi can be seen as a US/Western stooge who is ultimately favourable to Israel behind a facade designed to quiet his constituency.

Israel, the country which sickens everybody with their endless bellyaching about “anti-smetism” whenever their crimes are criticized, it is the same country which employs all its energy to think about ways to cause trouble and chaos for other countries and peoples.

The question is: what does israel think to do after this dirty game? It is becoming clear that israel has put this false-flag crime in scene as a cover of another big crime, or that that they want something from the Americans and will try to use this to twist their arm. What could it be that that they want? Is it the war against Iran or there is something else they want to force the USA to do? As of now, their dirty game would appear to have failed, as the whole event reeks of their participation.

Condemnation
We want to express our unqualified condemnation of the provocative film which insulted the religious feelings of Muslims all over the world. We also express our condemnation of the incident in which the American ambassador and three of his team were murdered in Benghazi / Libya at the hands of a group of extremists most probably infiltrated by Israeli operatives, an incident aimed at exploiting the natural anger of the people against such an anti-Islamic film. The anger of the people was misdirected and abused to provoke tragic bloodshed, which has nothing to do with freedom to express ones opinion. We demand that those who provoked and used this conflict be arrested and that they receive fair trials of law for what they did, and in the same way we demand that those who financed the unnecessary film published by “Bacile” be arrested and tried for their part in this atrocity.