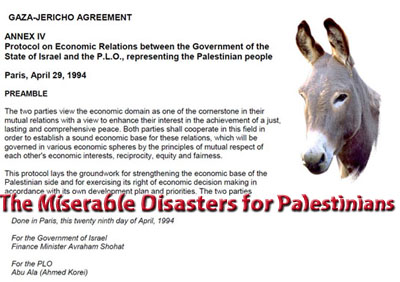 Israel and the Palestinian leadership signed the miserable Paris Protocol in April 1994 [2], (PDF 1994 Paris Protocol [3]) as part of the Oslo Accords. Mr. Maher Al-Masri was responsible for negotiating the 1994 Paris Economic Protocol with Israel, an agreement designed to build the Palestinian economy on free market principles and signed by Mr. Ahmad Korei (Abu Ala) for PLO and Finance Minister Avraham Shohat for the government of the Israeli occupation.

The Paris Protocol set up a framework for economic relations between Israel and the PA. Under the agreement, Israel began collecting import taxes on goods and transferring taxes to the PA on goods destined for the occupied Palestinian territories.

In turn, the PA was given authority to impose direct and indirect taxes, build an industrial policy, provide public sector jobs and establish a monetary authority. Palestinian trade with other countries was still handled through Israeli ports or Israeli-controlled border crossings, however, and continues to cause significant economic losses.

After signing miserable Paris agreement Israel control over the Palestinian market and the resulting economic and caused them disasters.

The Protocol on Economic Relations between the Government of the State of Israel and the Palestine Liberation Organization (Paris Protocol) stated (in part):

The two parties view the economic domain as one of the cornerstone in their mutual relations with a view to enhance their interest in the achievement of a just, lasting and comprehensive peace. Both parties shall cooperate in this field in order to establish a sound economic base for these relations, which will be governed in various economic spheres by the principles of mutual respect of each other’s economic interests, reciprocity, equity and fairness.

This protocol lays the groundwork for strengthening the economic base of the Palestinian side and for exercising its right of economic decision making in accordance with its own development plan and priorities. The two parties recognise each other’s economic ties with other markets and the need to create a better economic environment for their peoples and individuals.”

“The Paris Protocol gave the Palestinians administrative autonomy over the Palestinian Territories in terms of public service delivery, and formalized policies of economic cooperation and integration with Israel relating to the exchange of goods, fiscal policy, currency arrangements, and labor services…

The Paris Protocol was designed to formalize and improve the existing economic arrangements with Israel to promote Palestinian economic development and reduce disparities with Israel. To this end, the PP [Paris Protocol] consisted of the following measures:

Since the last week, thousands of Palestinians from the South of the occupied West Bank city of Hebron to the North of the occupied Jenin city demonstrated against the frustrating situation of the rising living costs, the continued high levels of unemployment, poverty, hunger, high taxes, and the consequences of the “Paris Protocol” with Israel. The Demonstrators called the PA for the cancellation of Paris Protocol.

On Sunday Sep. 9 2012, the Palestinian “president” Mahmoud Abbas asked Hussain al-Sheikh, minister for civil affairs to officially request Israel for talks on amending Paris economic protocol between the two sides.
Hussain al-Sheikh said that he wrote the Israeli government through the defence ministry on requesting the reopening of the Paris Protocol which is not compatible with the current economic situation in the occupied territories.