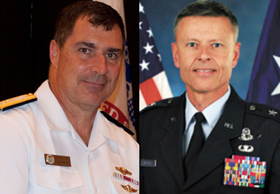 The Palestinian National Authority “security forces” (PNA Militia) working under the command of USA representative Lt. Gen. Michael Moeller, has arrested of a number of students of the Birzeit, Hebron, Nablus universities and the Technical Institute (College of Engineering) in Hebron, and they also re-arrested a number of released prisoners from the Israeli jails, among them academics, political activists on the wake of their participation in peaceful marches in solidarity with prisoners on hunger strike on Saturday, June 2 2012, who are interned at various prison facilities of the zionist Gulag.

According to my sources, the PA re-arrested dozens of the detainees who had been released during the deal to exchange political prisoners which took place between Israel and Hamas under the Egyptian coordination in past October of 2011. During their raids, the PNA goons damaged the property at the homes of these political ex-detainees while re-arresting them, just as what had been done to the same families before during the abduction operations of the Zionist occupation. Recently US Lt.Gen. Moeller was replaced by Admiral Paul Bushong, who was assigned as “security coordinator” within the American project to undermine the Palestinian cause and resistance to occupation and genocide perpetrated against us by israel and its friends everywhere.

Abed Al-Man, the brother of Zakaria Al-Zubaidi, a Fatah Figure and former leader of Al-Aqsa brigades who was recently jailed by the PNA, described Jericho: “Jericho has become Guantanamo” referring to the US military prison camp at Guantanamo in Cuba, where the United States holds people suspected of being from Al-Qaeda for years without trial. Al-Man added “the idea is to terrorize us. The jewish colonists smash the windows of our cars all the time and then the PNA militias come here, not to protect us Palestinians from the attacks, but to protect the colonists and to arrest and transfer our children to the Jericho jail under the control of the US Gen. Moeller. This is a policy of direct force against us”.

Anger, depression, complaints and alert dominates the city of Jenin because due to this latest “security campaign” of the PNA against the steadfast Palestinians in the face of the jewish colonists. While these jewish colonists are outlaws and criminals, the traitorous PNA elements accuse us Palestinians of exactly. This is the real tragedy currently happening in Jenin.

According to my sources, the PA has re-arrested, for no reason at all, dozens of the prisoners who were released during the freedom and exchange of prisoners which took place between Israel and Hamas under the Egyptian coordination on past October of 2011. The PNA militias also damaged the property and homes of the ex-detainees while re-arresting them, terrorized their children and families in the same was as happened to the same families during the raids and abduction operations of the jewish occupation.

The same sources stated that the PNA systematically tortures the detainees at its prisons. The PNA does not allow the Red Cross and other human rights organizations to visit the detainees during their detention. The “human rights organizations” working under PNA control in the occupied territories claim that their duties are ONLY to document the Israeli violations of human rights. This is not true. What happens is that they are not allowed to document the PNA atrocities and are afraid to report about the PNA violations of human rights. The price they would incur for exposing the PNA would be to have their organizations closed and their funding, which they receive from zionist-friendly organizations in western countries, disappear. 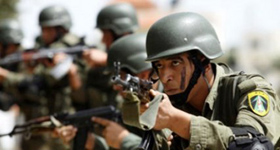 Among what these PAN-controlled “human rights organizations” did not report was that two detainees, Musab al-Bani Fadel and Rafat Shallaldah Joseph, aged 26, who were subjected to torture, severe beatings and deprivation of sleep, were transferred to a hospital for medical treatment as a result of torture and continued hanging in stress positions. The PNA continues chasing a number of other detainees who were previously released the Israeli prisons and are still free. These inhuman operations of the PNA are part of the so-called “security coordination” with the occupation of the “state” of Israel, actually not a state but an international criminal organization. The PNA “security” bodies even refuse to release Palestinian detainees who receive judicial court sentences of immediate release. 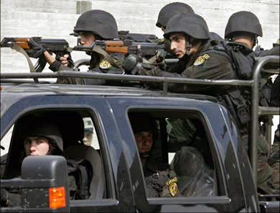 The arrest and terror campaign implemented by PNA against academics and politicians is called by the PNA “campaign of smiles and hope”. The terrorist operation launched by the PNA “security forces” is run by US Gen. Moeller, who sits in Tel Aviv and has offices at the PA headquarter in Nablus and Jericho. It must be explained that the “PNA security forces” are actually militias of Arabs and Palestinian dregs commanded by Gen. Moeller. He controls these goons, not the PNA criminals. So this USA “security coordinator” mission to the PA is part of secret annexes and agreements signed by the PNA for money. The PNA will not release further details about its secret agreements to the Palestinian public. The current Moeller-organized campaign of abduction of Palestinian intellectuals is carried out by over 2000 elements of the Presidential Guard and Special Forces of “terrorism combat” of PNA. These forces were all trained in USA, Israel, Jordan and Jericho under the auspices of US and European israel fetishists and criminals. 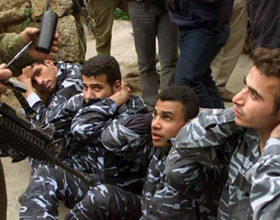 The Palestinian Authority claims that the implementation of this “security operation” in the occupied West Bank, the so-called “campaign of smile and hope”, aims to “eliminate armed gangs and arrest law breakers”. The facts are that the PNA allegations are false, they are simply lies. There are no criminals among those abducted. The real criminals, armed gangs and law breaker are the PA and the Moeller-controlled militias. The campaign of arrests has affected academics, doctors, engineers, university students and even members of the Palestinian security forces and police, along with elements of the Palestinian resistance with connections to Fatah, Hamas and Islamic Jihad. Not one of the detainees has anything to do with crimes of any kind as the PNA claims. The PNA elements are just sellout, dictators, collaborators and puppets of US-Israel and Westerns intelligence systems. 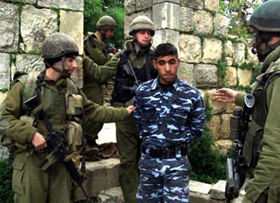 The PNA is implementing an American-Israeli plan called “Iron Fist” to suppress all opposition to the Israeli occupation and to take full control and power over the occupied West Bank. The “security plan smile and hope” was initiated by the previous occupier US General Keith Dayton on April 15 2008. The plan was stopped for a while during the past two years and was now revived under the current occupier Gen. Moeller, following the death of the governor of Jenin, Musa Kaddoura, who was shot to death by the resistance for collaboration (the PNA wants everybody to believe that he died of three heart attacks after shooting outside his home). Musa is widely reviled among Palestinians as the worst traitor and sellout associated with the so-called “normalization” with the zionist colonists at the squatter colony of Gilboa. He was linked to the worst projects of collaboration with the colonists of the West Bank known as “Jenin – Gilboa”, which meant expropriation of vast tracts of land in favor of the zionists.

The PNA receives an estimated half a billion dollars in annual “aid” from the United States, aid which is focused on the “security” sector, arming, rehabilitation and training of the PNA militias controlled by General Moeller. The lucre of US investment funds in the West Bank goes directly to the US through contracts given to American companies which have branches in Palestine. Little of the US funds goes to finance the PNA budget deficit and into the deteriorated economy of Palestine. The Palestinian unemployment in the occupied West Bank is over 70% and on top of this the PNA imposes draconian taxes upon small workshops and the subsistence labour of the beggared people who do not know how feed their families.

The mission of the PNA militia is to suppress the Palestinian people, to prevent demonstrations against the PNA, to protect the zionist colonists, to arrest the opposition by use of the methods of dictatorial regimes.

The US regime imposed Palestinian President Mahmoud Abbas on the Palestinian people even before the death under suspicious circumstances of the late President Yasser Arafat. The US also imposed “Prime Minister” Salam Fayyad on us, together with the so-called “chief negotiator” Saeb Erekat. These US-imposed elements are all seen as traitors in Palestine. They remain in their positions ONLY because of massive inflow of US funds and brutal violence against the people.