Some days ago, on 29 November 2011, I was “punished” by the PA mission and Fatah representatives because of what I said last year at the UN Vienna during the observance of the International Day of Solidarity with the Palestinian People in 2010, as recorded in the video below. One year later, the PA used the official work visit of President Mahmoud Abbas to Vienna to snub me, after I had received all respect and appreciation from the Austrian government and authorities.

Only recently and after speaking about this with colleagues I understood the reason for the violent behavior of these people. It had been because I confronted Dr. Nabil Shaath, a senior PA official, with the demand to stop jailing Palestinians in the occupied territories, and reporting about his answers to me, and because I declared a Palestinian State because of my distrust of the PA and all what they do.

What I said was:
“Again, I demand that the PA stops this criminal coordination and lets see how Israel and the US will react. It is horrible what PA is doing to Palestine. You are continuing to deal with them from the position of a weak partner, while we are strong and those people who you meet and kiss in the Ramallah headquarters are all war criminals. I am ashamed and bored of all what you are doing in Palestine. Over 23 years of negotiations with the Israeli occupation and all what we have received is NOTHING. Don’t you have another qualified negotiator instead of Mr. Saeb Erekat, who has been in his place as a negotiator since 23 years?”

I did not publish the video below with this confrontation with the Dr. Shaatا because his non-answers to my demands are just too silly and completely off topic. He laughed loudly after I spoke, as if it was a joke. His irresponsible reply and his crazy laughter made me aware of what kind of Palestinian Authority we have. The video takes place after Dr. Shaat arrived 1 hour late to the session – reportedly because he had gone shopping to the city center – and submitted the remaining audience to 40 minutes of abstruse rambling. Dr. Shaat, the apparently insane man in the video, is who the zionists want to keep in power against overwhelming popular will beyond May of 2012, so that their autocracy of traitorous kleptocrats can stay put in Palestine.

With loud laughter Dr. Shaath answered to my intervention that it was better if I continued photographing instead of talking. Ambassador Zuheir Al-Wazeer also intervened and said to me “you are a good photographer, and you make excellent photos”. His nervous laughter clearly reflected his confusion. Shaath replied to my confrontation with words which completely lacked any sensitivity and were totally off the subject. He mixed between things and caused himself to become involved into a confrontation with the Consul of the Republic of Syria, Mr. Jamal Agha, who was present at the event.

Shaath said that “he understood well my argument”, and then engaged in minute-long rambling: “but once the people decides to go in a military actions they go, but when they do not want to go to a military action they do not free the people to do so. This is not what Fatah is doing in the West Bank, but also what Hamas is doing in Gaza. You can’t allow people to shoot rocket when you are not ready to continue a fight against the Israeli occupation, like what happened in Gaza in 2009. You can’t allow people to go on their own and fight Israel in West Bank while there is a decision not to go to a military fight now, and if you are a Syrian you do the same at the Golan Height, and you do not allow people to go to the border to make war against Israel while the Syrian are not ready to do it”. 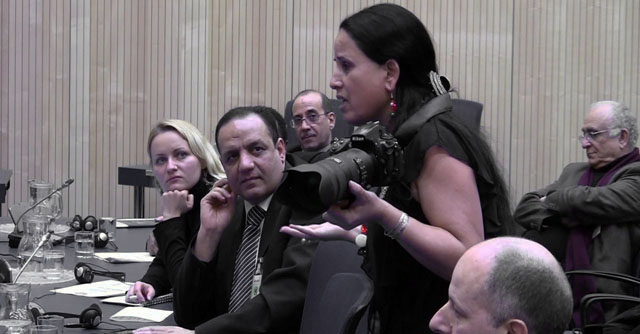 “I understand you that we have enough people at the Israeli Jails, and that we do not want to act like them and to put the Palestinians in Palestinian jails or the Syrian in Syrians jails. We have enough people at the Israeli Jails. I understand you but that is not really all about, there are two things which have to be considered, first: we do not want any political prisoners in Palestinian jails in Gaza and the West Bank. And second, we do not want the people to take the matter in their hands and to decide that they want to go to make war when their people are not really ready to fight that war.”

“In Gaza 25% of the homes are destroyed, and 50,000 Palestinians were injured, and 14 hundred were killed, and the Israelis if they decided to attack Gaza again, they can destroy the whole of Gaza if Hamas did not stop the people in jail who want to shoot on the Israelis, and this is the same in the West Bank, we have decided that this is not the right time to go in full military confrontation with the Israelis. We did that for 27 years plus 6 years of Intifada. All together 33 years we did the military confrontation with Israel, and now we are not ready for that. Because of this reason we decided to go in a popular struggle against Israel.”

I answered: “But you are still jailing the popular resistance Mr. Shaath, and you are protecting the Israeli occupation instead of your people, the Israelis continue killing, jailing and invading our towns and cities, humiliating the people, destroying their property under you supposed full protection, so who will protect me and the Palestinians”.

This long answer of Dr. Shaath was off topic. I just asked him to stop the so-called security coordination with the Israeli occupation and to use this paper as a pressure on Israel in order to stops its arrogance in dealing with the Palestinians who they treat miserably, even in small things like that President Mahmoud Abbas needs a travel permit from the occupation whenever he moves from his basement to another Palestinian canton or to so-called peace negotiations.

In Palestine there are no borders which Shaath should protect from a “military war”. There are cantons, ghettos, and small jails where all Palestinian are humiliated by both the Israeli occupation and the PA puppets. During the 33 years which Shaatا mentioned, there was no “military war” against Israel, there was ONLY resistance struggle against the Israeli occupation, which was taken up by the PLO and the people directly affected by the Israeli crimes. Either Dr. Shaath did not know what he was speaking, or he was sick and confused.