In the midst of my grief I told myself “let me go out where I do not see or hear the news of the lying politicians or watch the TV falsifying the news about the catastrophes and disasters around the world and instead spreading rumors, lies and half-truths”. I got out of home with bitterness and pain in my throat of all what has happened in Japan, Libya, Bahrain, Yemen, Palestine, Egypt and the whole world.

It is very difficult to be a political activist and a political refugee, to live in the exile and at the same time to be at distance from political developments. My Mam warned me a long time ago. She told me in her simple language: (السياسة تياسة) “Al-Siasa is a kind of thaiasa – politicians are like pimps”.

“Thaiasa” is a word which has different meaning in the Arab World. In Libya and Morocco, “Thaiasa” means “pimp”, the person who brings other men to sleep with his wife, daughters and female relatives, or in general the person who brings men to other women for a fee. In Palestine, “Thiasa” means the donkey which does not understand. This word is used at the schools as an insult against the students who disobey the teacher’s orders, who do not make their homework or prepare themselves for the exams. In the Middle East, “Thaiasa and Thais” has the meaning of “the stinky old goat who begets all the goats and drives the herd to peril”. Usually the “Thais” has a foul stench.

To make a direct connection between the politics and the stinky goat that brings the herd to the peril, and to make the connection between the politicians and the immoral pimps and stupid donkeys, and that in one short sentence, that is wisdom. Never have understood that my old Mam was a politically interested person, just like me or even more so. Just now I am starting to understand that my Mam taught me political wisdoms.

I remembered my mother’s political saying only today after the fourth nuclear power plant in Japan exploded. The gravity of the natural catastrophes which have recently affected Japan is smaller than the gravity of the nuclear catastrophe caused by the Japanese Thios (plural of Thais). The nuclear catastrophe is now sending high levels of radiation floating towards other areas of Japan, Tokyo, and perhaps it will expand towards the neighboring countries or the whole world, and threat the health of most humanity, not only for the next years but for the next generations.

The high level of radiation floating in Japan prompted thousands of the rich Japanese and foreigners to flee their country while Japanese and European TV insist around the clock that there is no danger. While the WHO insists that there is no danger, we see on TV that the catastrophe is out of control, and there are news that reportedly China is evacuating all its citizens from Japan with an air bridge, and that “foreign bankers” are abandoning Japan and paying “any price” to charter airplanes. Truly, the “Thios” of politics are a threat for all humanity. They are the terrorists who have brought us these catastrophes. They are the problem.

After I saw the pictures at this link sent me by Austrian artist Franz Morgenbesser [1], http://www.abc.net.au/news/events/japan-quake-2011/beforeafter.htm , I decided that I had seen enough. I went to Türkenschanzpark in the 18th district instead of covering yet another useless press conference where I knew we would just get lied at. I left home while the images of the Japanese catastrophe occupied my mind.

The catastrophe of Japan showed me that there is no difference between the dirty politicians and their disgusting politics around the world. There is no difference between all the disasters that take place in Palestine, the Middle East, Europe, and USA or anywhere else in the world. All disasters, wars, occupations, drugs … are perpetrated or caused by the same politicians and bankers. These politicians are truly the “Thios”, the pimps, and criminals. The inveterate liars who fornicate all humanity and who drive all nations towards peril. These are the stinking old goats about whom my Mam spoke in her simple words.

I eventually arrived in the Türkenschanzpark, which was the encampment of the Turkish

[2]army when it laid siege to Vienna in 1683. The garden was established 1885 – 1887, and it was expanded by the city of Vienna in the years 1908 – 1910. As always I got out with my camera, I never know what expect me. The weather was nice and warm. The ducks were swimming in the ponds of the garden, competing with the raven to pick up the food which the children and people threw in the water. The ravens were crowing loud and louder as they were calling each other for the big banquet. The raven were waiting on the trees above the pools, and they would race in with skill to gather small pieces of bread from the water and fly again to their branches, just as if the bread was an enemy who wanted to escape from their abduction of food. Click once on the picture to make it bigger.

In one of the ponds there were several ducks, among them a female duck between two male ducks, which caught my attention. The male ducks were attacking any other duck who tried to come near to the female, and she was obviously very happy and proud of herself between her two duck “bodyguards”!! (Click her to see more pictures from the Türkenschanzpark [3]).

I was busy shooting pictures of these three ducks and forgot the rest of the birds. I forgot

[4]Japan, Libya, Austria, and Palestine. I forgot the children, the birds and the crows. I forgot everything and I did not see or feel anything around me except these three ducks. I do not know how long it lasted while I was shooting the ducks, maybe more than half an hour. I do not know whether the ducks felt my presence or not. If they were happy or felt bored of me shooting them!! But I myself, I saw all of them happy, especially the female duck who had managed to keep the two male ducks near to her!!

I left the duck pond. I walked a few steps around to see the small buds and blossoms blooming in purple and orange. I was amazed of the beauty of the nature which gives us without limit and hits us without mercy!! I heard a voice behind me speaking. I do not remember what I heard, but I realized that somebody was talking to me. The voice woke me up from the world to which I had absented myself.

I turned around and I saw a polite young man holding a white paper between his hands. He offered me to have a look at the paper. My picture was on one side, and on the other side was the name of the man and a homepage http://www.erichtiefenbach.com/ [5]. 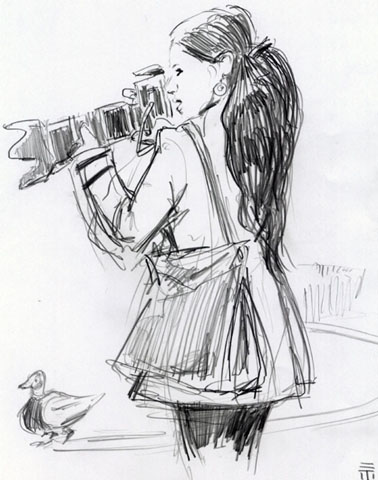 He was Erich Tiefenbach, an Austrian artist who had drawn my picture while I was shooting the ducks. The Austrian artist refused to take money for drawing the image. He said that he wanted to give me the image as a present.

It was an amazing and beautiful present. I stood looking at the drawing of the artist. The thankful words were petrified in my throat. I did not know what to say. I shook hands with him, I thanked him in my own way, as if he was one of my closest friends.

Such are the Austrian people. They are very polite and respectful, and often enough they hold friendly surprises. Thanks to Mr. Tiefenbach for his beautiful drawing. His precious gift is much respected and I will keep as part of my beautiful diaries from Vienna. Mr. Erich Tiefenbach is a famous Austrian artist and caricaturist. He has made lots of very expressive graphics and caricatures of famous politicians and personalities. Through his graphics you can see the expressive fine art and read the vitriol of politicians in the language of pictures of a professional artist. Here is a link to Mr. Tiefenbach’s homepage [5].