The Egyptian revolution was an earthquake to the israeli zionisit organization, which shows confusion in how to deal with the sudden situation where the majority of the Egyptian nation demands the departure of 82-year-old President Hosni Mubarak, his ruling party and his fascist military regime.

Israel, the zionist jewish entity which usually intervenes in the internal affairs of all Arab and foreign

countries and imposes its will on other nations through its American ally, is now holding “security” meetings and consultations at the highest levels, with the participation of Prime Minister Benjamin Netanyahu, the ministers of “defense” and “foreign affairs”, Ehud Barak and Avigdor Lieberman, and the presence of leaders the various security arms (military, interior intelligence and Mossad) to follow developments of the situation in Egypt. The Israeli cabinet investigated the apparent failure of its intelligence apparatus, which supposedly was not able to report correctly about the situation in Egypt before the revolution broke out. The government criticized the military intelligence and the Israeli foreign intelligence service, mossad, for failing to anticipate what happened and that the instability of the Egyptian rules.

The zionist regime is in the meantime so scared that they are thinking of taking over the Sinai peninsula, of stationing parts of the IDF there. This would be in addition to a contingent of international troops under the command of an italian colonel which already hold the Sinai occupied under the pretext of an international accord to guarantee for the “security” of the peninsula, in a similar way as international troops keep the Golan heights occupied for the convenience of israel, under the pretext of some UN resolution. “Click here [1]“

Another development is that the Connecticut National Guard Detachment 2, Company I, 185th Aviation Regiment of Groton will be flown to the Sinai in order to guarantee the security of the vampiric regimes of israel and Egypt. It is in such times of crisis that the true fascist character of the rulers of many states shows.

Earlier, the zionist entity contacted the USA and its allies in the West countries to give support for the Egyptian regime which is crumbling into collapse. President Mubarak, who ruled Egypt for over a 30 years, insists in not giving up power, just like war criminals, and he is awaiting a miracle (perhaps a heart attack) while Egypt burns and the streets boil over with rage. Other people think that Mubarak is going to resign quietly, but he still hangs on to power and hope for support from his “allies”, Israel and the United States. 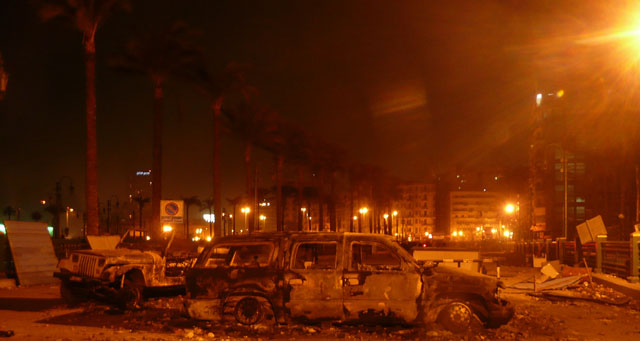 The sick old man Mubarak and his regime are the strongest ally of the zionist entity. Israel knows very well that the unlimited support which they receive from the Egyptian regime is one of the main reasons which led to the outbreak of the Egyptian revolution. In Egypt, poverty, hunger, unemployment, an increasing rate of illiteracy, deteriorating economic and social realities and health system, and the unfettered interference of the US and the western countries in the internal affairs, which are only in the favor of Israel before the Egyptian people, are the reasons behind the explosion of the Egyptian revolution.

Israel has been drained of the capabilities of the Egyptian people and its natural resources. Egyptian gas was sold very cheap, under market value, to Israel, against the will of the nation. In 2005 the Egyptian government signed a controversial agreement with the zionist entity to export 1.7 billion cubic meters of gas yearly to Israel for 20 years, at prices between 70 cents and 1.5 dollars per million Btu, while the gas costs the state 2.65 dollar. There is not extra natural gas for the use of the country. Many Egyptian towns have not received even this fundamental service while the gas goes to israel. These towns rely on traditional ways of of heating, like petroleum, in their daily lives. Aggravating the situation, on 1 June 2008 the Egyptian People’s Assembly refused a request by members of the opposition to hold a special session on the issue of exporting Egyptian gas to Israel. 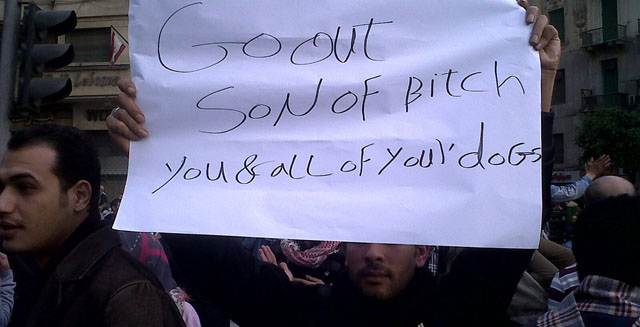 Since the revolution for change broke out in Egypt, the Egyptian revolutionaries have occupied central Tahrir Square in Cairo, and they will stay until the unwanted President Mubarak and his government and party leave the rule in Egypt. Signs were raised today saying: “The army must decide and choose if they want Egypt or Mubarak”. The participants were chanting anti-regime songs such as “the nation wants to overthrow the regime”, “Leave little blood in your face and go away” and “Susan tell your husband to go away”.

The demonstrators chanted slogans of rejection against the newly installed government of Mubarak. In addition to the chants, the anti-Mubarak writings were written on the tanks, on walls across Tahrir Square and on the statues, including the famous Statue of Abdel-Moneim Riad. 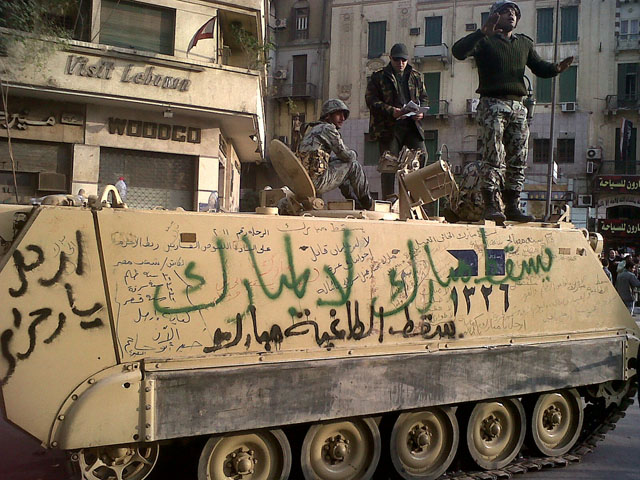