Troops of the Israeli occupation war criminals Lt. Col. Guy Hazut, (סא”ל גיא חזות [1]), Major General Avi Mizrahi, (אלוף אבי מזרחי), Brig. Gen. Nitzan Alon, (תא”ל. תא”ל אלון ניצן), and Brig. Gen. Yoav “Polly” Mordechai, (אלוף יואב (פולי) מרדכי [1]) [1], murdered in cold blood the elderly Palestinian Omar Salim al-Qawasmi, 66, at dawn of last Friday. They smashed his head to pieces while he was sleeping in bed in his house at Haret Al- Sheikh in the center of Hebron. Lt. Col. Hazut, the so-called military brigadier of the IDF in Hebron was with his bloodthirsty death squads when they murdered Al-Qawasmi. This war crime was perpetrated during the raid on the house of Al-Qawasmi where a political leader, one of six Palestinians who had been released from the PA jail the day before, rented an apartment in the first floor of the victim’s house.

Sobheye al- Qawasme’s, the victim’s wife, said that she did not know how the IDF soldiers broke into their home. “I was praying at dawn when that the IDF soldiers broke into our house. I don’t know how they opened the door. Suddenly I saw the soldiers closing my mouth and pointing their guns to my head. I was shocked. I asked them, “What are you doing?” They ordered me to shut up and took me to another room under threats of shooting me in head. My paralyzed child was also in this room and very frightened”.

“I saw many soldiers break into the room where my husband was sleeping. I heard bombs and several shots inside the room. When the occupation soldiers left, I went to the room, I saw that the head of my husband was broken and smashed into several pieces, his brain was out, and his blood was spilled in bed. He was swimming in a pool of blood.”

Omar Salim al-Qawasmi, 66, a victim of the commonaders seen in the picture above.

During the IDF raid, they arrested the neighbor of Al-Qawasmeh, Wael Mahmoud Said al-Bitar, a Palestinian activist who was one of six political prisoners released by the Palestinian jailers on the previous day. Al- Bitar lives with his family in a rented apartment in the first floor of the same house of Al-Qawasme.

Security Coordination and a Cold-blooded Execution

Five of the political activists had been jailed at the Jericho prison during so-called “security” coordination between the traitors of the PA and the occupation after some jewish colonists were killed in September 2010 near Bni Neam village near Hebron. The prisoners were tortured and denied family visits. They went on hunger strike for over 45 days, demanding to be moved to Hebron so that their families could visit them. The Palestinian media was censored by the PA and did not report about the hunger strike and the deteriorated health of the prisoners.

Finally, a campaign of spying between the Palestinian security and the Israeli occupation, in which the PA decided to release the political activists (a trick) so that the IDF war criminals could proceed to arrest or execute them. During the campaign between the Israeli war criminals and their friends, PA traitors, the prisoner’s interrogation files were submitted to the Israeli occupation. On last Thursday the Palestinian authority implemented the first part of their deceptive campaign and released the prisoners.

The dirty mission was implemented by the PA, whose officials who stated on Thursday that Palestinian President Mahmoud Abbas had ordered the release of the six prisoners after direct appeal from the Emir of Qatar and because the president wanted to end this issue of the political prisoners once and for ever.

The Palestinian “security” organization officers at jail forced those prisoners who were released and their families to sign a pledge according to which they bear responsibility for their own safety after their release.

This dirty act of treachery between the PA and the colonial israeli zionist occupation, President Mahmoud Abbas and his traitors used the arrest of the activists who were released and then arrested by the Israel as a justification to keep three thousand more political activists in jail, among then teachers, engineers, doctors, professors, youths and elderly. The PA in all seriousness claims that the jailing of political activists is some kind of “protection” from the Israeli occupation. 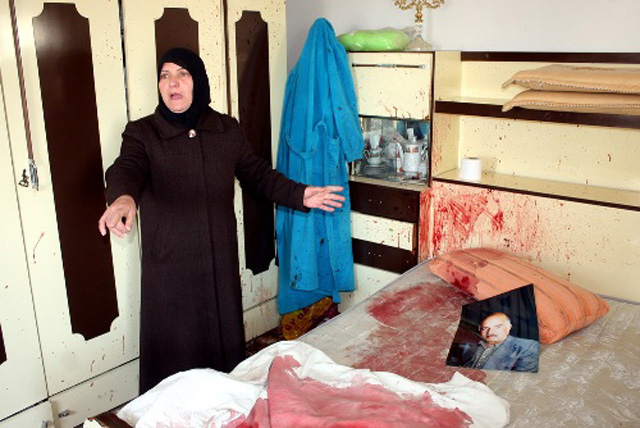 Sobheye al- Qawasme's, the victim's wife is shocked in her bed room.

Hamas accuses the PA of jailing and torturing 3000 of its elements at its prisons, which previously were jails of the occupation.

[2]It must also be noted that the Committee of the Palestinian Prisoners Relatives, a group of relatives of the abductees in the prisons of the Palestinian Authority in the occupied territories in the West Bank, released a statement accusing Mr. Majed Faraj, chief of the General Intelligence of the Palestinian Authority, which is under the authority of President Mahmoud Abbas, of calling the wives of the prisoners to his office and abusing them sexually and extorting sexual favors from them in exchange of promises to release their husbands or commuting the sentences issued against them by military courts, or for permission to visit the husband.

I was direct witness of one such case and I know that it is usual procedure by PA police or jail officers to extort sexual favors from relatives of prisoners, especially if the women are young and beautiful.

On the other hand, Fatah accuses Hamas of arresting its political elements in the Gaza. Fatah issued a statement warning of “the risk of death threats” to the lives of its militant activists who went on hunger strike in centers of torture of Hamas in the Gaza Strip. Fatah appealed in a statement issued in the second of this month for the intervention of Palestinian national groups, personalities, independent Palestinians, and human rights and international organizations to put an end to the repressive measures against the political activists in the centers of torture belong to Hamas and asked them to work to release them all.

Fatah stated that six of its activists had entered a hunger strike since three days, claiming that the prisoners already suffered poor and deteriorated health conditions as a result of torture and the daily violations of their rights at the centers of torture affiliated to Hamas.

Fatah stated that “Hamas” is fully responsible for the lives of their detainees. Fatah added that the detainees fall under the risk of “double death”, as a result their deteriorated health due to torture and the continued hunger strike, in addition of leaving them held in places which could be bombed at anytime by the Israeli occupation.

It is truly disgusting to see to what level the PA has learned the arts of whining and lying from their jewish masters. It is disgusting to see the abject levels of betrayal of these brown-nosers who have no compunction in setting up a situation where it people get murdered. With the murder of Omar Al-Qawasmeh by Hazut and his henchmen, it has become clear that the PA has become more jewish than the jews, more zionist than their zionist masters, and equally devoid of humanity and honor. It is equally disgusting to see Hamas jailing resistance people just because they are not under their control, dirtying upright citizens with accusations of collaborating with israel, torturing them, breaking their legs or murdering them, only because they walk under different colours.