Image from the the confusion.

During a Palestinian-Palestinian confrontation, between me and Dr. Nabil Shaath, the member of the Central Committee of the Fatah and its commissioner of international relations, who delivered a speech at the UN on the occasion of the International Day of Solidarity with the Palestinian People, Dr. Shaath was not able to give a short answer to my question of about the so-called “security coordination” between the Palestinian Authority and the “DCO” office of Israel, in which the Palestinian security system is ONLY used for jailing Palestinians and protecting the terrorist jewish colonists and their zionist project in Palestine.

The speech of Dr. Shaath delivered on that day was interspersed with inane laughter was not right for the place and the occasion. It can only be described as clowning and demagoguery that did not rise to the level of responsibility for the Palestinian which is expected from someone in the position which Shaath occupies.

Mr. Nabil Shaat described the miserable situation of the Palestinian Authority and how President Mahmoud Abbas and his cabinet are not able to move between their cantons spread here and there in the West Bank without asking for permission from the Israeli occupation. He also described the difficulties which the PA faced during the so-called peace negotiation with Israel. Dr. Shaath was complaining and laughing at the same time, mixing between serious issues and his silly jokes during his official speech at the UN. He decried the miserable situation which the PA accepted and brought to themselves and their nation. 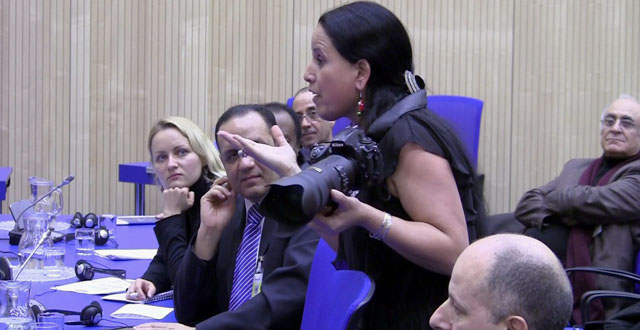 Image from the confrontation.

I said: “I am happy because there are not many diplomats with us in this room so they do not hear what I want to tell you Dr. Shaath. We as Palestinians are able to do lots of things; I request and demand that you to stop your “security coordination” with the Israeli war criminals, and stop protecting them. This is the only thing that makes us Palestinians weak. I also ask you to stop jailing the Palestinian politicians and resistance. I see that your coordination with the Israeli war criminals ONLY puts you in the weak position. The Israeli occupation is using your authority to capture and to jail the Palestinian resistance. 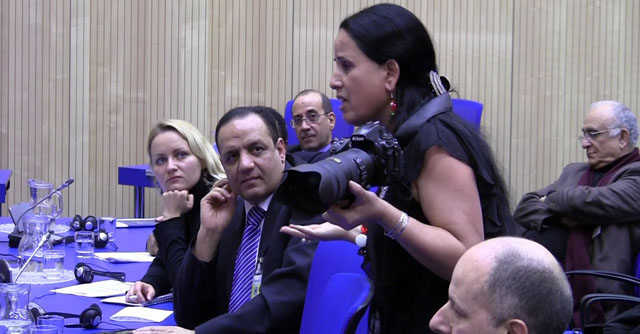 Israeli checkpoint inculture. Will we see such images at European airports soon?

Again, I demand that you stop this kind of criminal coordination and see how Israel and the US will react. It is really horrible what you are doing in Palestine. You are continuing to deal with them from the position of a weak partner, while we are strong and those people who you meet and kiss in Ramallah headquarters are all war criminals. They came to my apartment to try to murder me where I live in Vienna because I am not listening to you or controlled by them. I am ashamed and bored of all what you are doing in Palestine. Over 23 years of negotiations with the Israeli occupation and all what we received is NOTHING. Don’t you have another qualified negotiator instead of Mr. Saeb Erikat who has stayed in his place as a negotiator since 23 years?”

The Irresponsible Answers And Confusion: 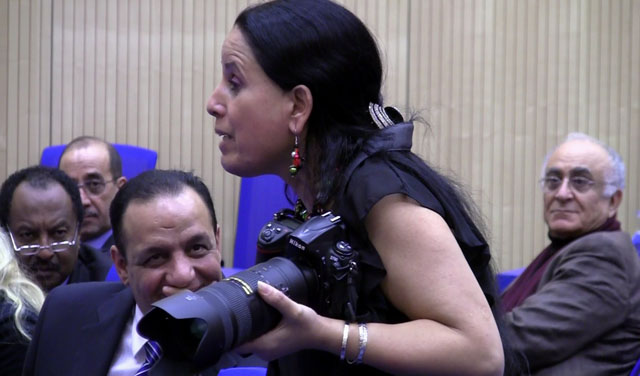 Image from the confrontation.

With loud laughter Dr. Shaat answered to my intervention that it was better if I continued photographing instead of talking. Ambassador Zuheir Al-Wazeer also intervened and said to me “you are a good photographer, and you make excellent photos”. His nervous laughter clearly reflected his confusion. Shaath replied to my confrontation with words which completely lacked any sensitivity and were totally off the subject. He mixed between things and caused himself to become involved into a confrontation with the Consul of the Republic of Syria, Mr. Jamal Agha, who was present at the event.

Shaath said that “he understood well my argument”, and then engaged in minute-long rambling: “but once the people decides to go in a military actions they go, but when they do not want to go to a military action they do not free the people to do so. This is not what Fatah is doing in the West Bank, but also what Hamas is doing in Gaza. You can’t allow people to shoot rocket when you are not ready to continue a fight against the Israeli occupation, like what happened in Gaza in 2009. You can’t allow people to go on their own and fight Israel in West Bank while there is a decision not to go to a military fight now, and if you are a Syrian you do the same at the Golan Height, and you do not allow people to go to the border to make war against Israel while the Syrian are not ready to do it”. 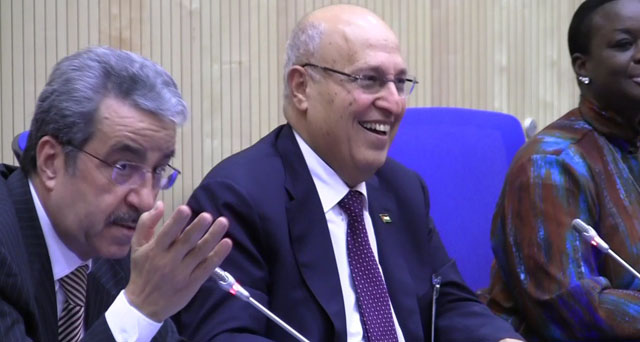 Image from the the confusion.

“I understand you that we have enough people at the Israeli Jails, and that we do not want to act like them and to put the Palestinians in Palestinian jails or the Syrian in Syrians jails. We have enough people at the Israeli Jails. I understand you but that is not really all about, there are two things which have to be considered, first: we do not want any political prisoners in Palestinian jails in Gaza and the West Bank. And second, we do not want the people to take the matter in their hands and to decide that they want to go to make war when their people are not really ready to fight that war.” 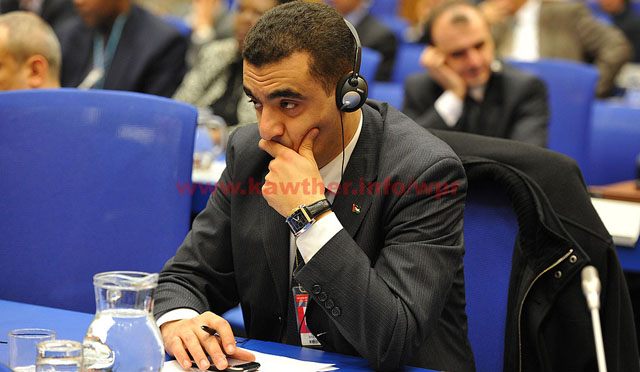 “In Gaza 25% of the homes are destroyed, and 50,000 Palestinians were injured, and 14 hundred were killed, and the Israelis if they decided to attack Gaza again, they can destroy the whole of Gaza if Hamas did not stop the people in jail who want to shoot on the Israelis, and this is the same in the West Bank, we have decided that this is not the right time to go in full military confrontation with the Israelis. We did that for 27 years plus 6 years of Intifada. All together 33 years we did the military confrontation with Israel, and now we are not ready for that. Because of this reason we decided to go in a popular struggle against Israel.”

I answered: “But you are still jailing the popular resistance Mr. Shaath, and you are protecting the Israeli occupation instead of your people, the Israelis continue killing, jailing and invading our towns and cities, humiliating the people, destroying their property under you supposed full protection, so who will protect me and the Palestinians”.

This long answer of Dr. Shaath was off topic. I just asked him to stop the so-called security coordination with the Israeli occupation and to use this paper as a pressure on Israel in order to stops its arrogance in dealing with the Palestinians who they treat miserably, even in small things like that President Mahmoud Abbas needs a travel permit from the occupation whenever he moves from his basement to another Palestinian canton or to so-called peace negotiations.

I also demanded from him to stop jailing the Palestinian politicians. Dr. Shaath is a big liar and the Palestinian jails are full of politicians and political activists, not of army. Even Sheikh Dr. Tayseer Al Tamimi, the former head of the Islamic judges, was fired by President Mahmoud Abbas on the 7 th, of June  2010 from his position after he delivered a speech about Al-Aqsa mosque, in which now all religious speakers are forbidden to talk about under the new instructions of  so called “incitement against Israel” issued by the Palestinian Authority.

In Palestine there are no borders which Shaath should protect from a “military war”. There are cantons, ghettoes, and small jails where all Palestinian are humiliated by both the Israeli occupation and the PA puppets. During the 33 years which Shaat mentioned, there was no “military war” against Israel, there was ONLY resistance struggle against the Israeli occupation, which was taken up by the PLO and the people directly affected by the Israeli crimes. Either Dr. Shaat did not know what he was speaking, or he was sick and confused.

Confrontation with the Consul of the Republic of Syria 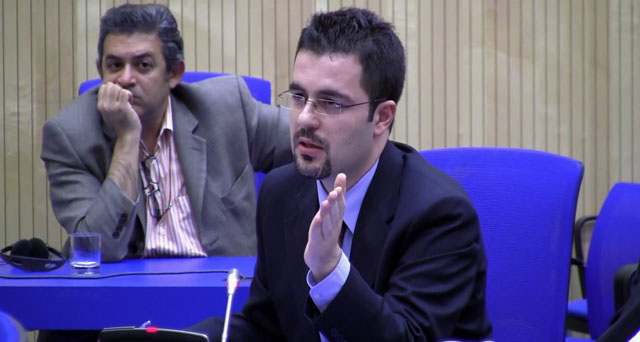 Mr. Jamal Agha, consul of the Republic of Syria

His irresponsible answer leads to a confrontation with the consul of the Republic of Syria, Mr. Jamal Agha. He told Dr. Shaath: “Please do not speak on behalf of others. I am from the Syrian Republic and I do not accept that you speak on behalf of us. Thank you”. The Syrian consul said that Syria does not jail their resistance, (meaning the Syrians from the Golan Heights who have been robbed from their possessions by jewish squatters who are supported by israel and several European countries). This was what the consul understood from the irresponsible ramblings of Dr. Shaath answering to my simple and clear request.

Dr. Shaath tried to clarify to consul Agha what he said about the Golan Height in his answer to my question. He turned the things upside down in his “clarification”, which is recorded on video, (the Palestinian Embassy does not want me to publish it). The Syrian Consul actually understood well what had been said. Dr. Nabil Shaath had said EXACTLY what the Syrian Consul had understood. 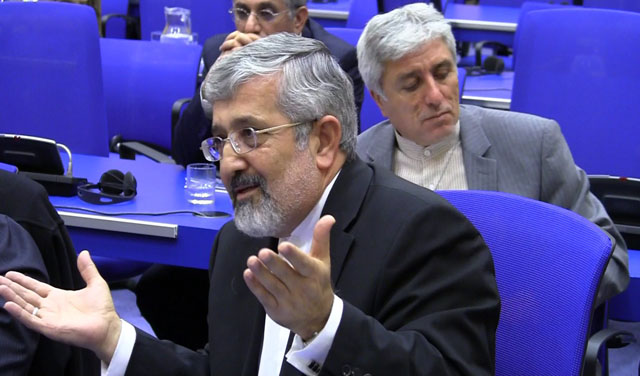 It should be noted that Dr. Nabil Shaath did not attend the formal session of the International Day of Solidarity with the Palestinian People, just like many Ambassadors from Arab countries whose presence would have been welcome. Dr. Shaath was present at the informal event which took place during the morning at the UN Rotonda, where he gave a brief speech and then left for lunch. He arrived over one hour late to the formal ceremony in the UN conference center and proceeded to mix things up.

My impression is that Dr. Shaath does not understand or care much about the situation of Palestine because he is travelling most of time, or residing in Egypt where the problems far away. As a Palestinian I feel offended that Dr. Shaat, who formerly occupied the position of foreign minister of the PA, and currently the commissioner of international relations of Fatah, dishonors us by arriving late to an important occasion involving dignitaries from the nations which support us. Equally, I am consternated that he would call our resistance struggle against the occupation a “military war” and speak of “borders” which do not exist. I wonder if it is appropriate for him to continue representing Palestine to the outside world.