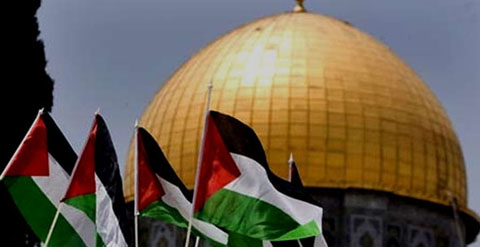 Sakhra, (Dome of the Rock) and Palestinian Flags.

[1]destroy the Al-Aqsa Mosque and build a jewish temple in replacement. Avi Mizrahi is the General who wants to capture and kill the Palestinian Police and security forces whenever the terrorist octopus act against the Islamic mosques in Jerusalem or Hebron. Avi Mizrahi is the same as the general who trained IDF soldiers in the morning and the in evening for the next massacre against Palestinians, and then he does not hesitate to visit the Palestinian officers who are supposed to be murdered by his soldiers and shake hands with them, spending a day or three days in the hospitality of those officers to discuss the names on the lists of “wanted Palestinians” by Israel. Avi Mizrahi is one among the Israeli zionists who thinks only in terms of war, murder, looting, robbing the lands and property of Palestinians and the neighboring countries, in full accordance with the instructions given in the Protocols of the bloodthirsty Elders of Zion.

Below is a brief statement about the war criminal Major General Avi Mizrahi, whom the Palestinian authority continues hosting in the occupied Palestinian cities together with his military intelligence team.

[2]Currently, Mizrahi is a Commander of the IDF military “Central Command” which is responsible for all kinds of theft, robbery, murder, arrest and assassination operations in the occupied West Bank, as well about all the military checkpoints and military bases spread everywhere in the Palestinians cities and towns. He was appointed on October 22 2009 in replacement to the war criminal Gadi Shamini [3], “אלוף פיקוד המרכז גדי שמני“, (currently military attaché in Washington).

During the first Intifada, Mizrahi was a commander of an armored brigade. Through his personal talk published in Hebrew media, Mizrahi confesses that he was a field murderer, always on foot and achieved his “targets” of executing Palestinians and jailing them.

During the tunnel clashes which broke in 1996 as a result of the Israeli drilling under Al-Aqsa and opening a museum, Mizrahi administrated the IDF operations in the Palestinians cities where he arrested dozens of Palestinians and murdered dozens more.

Between 2001 and 2003, Mizrahi served as the commander of an IDF division, during the so-

[4]called “Operation Defensive Shield” a large-scale military operation in the occupied West Bank during the second Intifada and which started on March 29 2002, Mizrahi was a commander of the IDF division 36 “Achsgolny”, he joined his troops in terrorist operation into Ramallah placing Yasser Arafat and his compound under siege. He murdered dozens of PA security forces who were found in a building near Al-Moqata which Mizrahi had surrounded with tanks.

Mizrahi also sent his tanks to invade Tulkarem and Qalqilya. On April 1 2002, he invaded Bethlehem. On 2 April 2002 he invaded Jenin and Nablus where he perpetrated massacres and other war crimes. His operation in Jenin was characterized by strict curfews on civilian populations; restrictions were imposed on movement of international personnel, including a prohibition of entry of humanitarian and medical goods and personnel into the Palestinian cities. Over 700 Palestinians were killed by Mizrahi tanks during these incursions.

During the Lebanon war 1982, Mizrahi was commander of a tank battalion, his activity included ambushes and crossing the Litani. During the second Lebanon war, Mizrahi was a commander of a Merkava tank brigade together with Moshe Chico Tamir, “משה (צ’יקו) תמיר” and Nitzan Alon “ניצן אלון”, (now commander of the IDF in the occupied territories). After the war of 2006 he returned to the IDF ground forces and headed “Operation Cast Lead” in Gaza”. “מבצע עופרת יצוקה”

Mizrahi is an extremist and radical zionist. He was born in 1957 in Haifa (a Palestinian city ethnically cleansed by the jews in 1948). Mizrahi is a strong supporter of the squatter colonies in the West Bank. He described the terrorist squatters as “mostly great people. We have to support them” in Hebrew media.

Mizrahi went to the Bilin village where a weekly peace demo faces his troops. Mizrahi ordered his troops to shoot at the demonstrators in Bilin. After his visit, a foreigner peace activist was shot dead. Mizrahi described his visit to Bilin and said: “I saw dozens of Israelis violating the law; the law is not being met with them. Our soldier should enforce the law, and also on those ones who share Bilin demos”.

Mizrahi is married with a teacher. He has three daughters (one is married and 2

[5]are IDF soldiers). He lives with his family in a village about 45 Km. south of Haifa. This was called Zamarin and it is one of the many Palestinian villages which were ethnically cleansed by the jews. The village was renamed “Zichron Yaacov” and a zionist colony established by James de Rothschild [6], [6] now ultra-orthodox jews and members of Chabad-Lubavitch live there. Zamarin was the the first village which was attacked and ethnically cleansed by the Haganah terrorists in their massacre against Palestinian villages, cities and towns in 1948.

Mizrahi joined the IDF in 1975. He was in the “Merkava 36th armored division” (this means that he was a cluster bomber Sheller). The 36th Armored Division is known as the Ga’ash formation, it is the largest armored division in the IDF, which includes “engineering corps soldiers” who are attached to it. It is stationed on the Golan Heights under authority of the Northern Command. It is currently commanded by Brigadier-General Sami Turgeman. It also includes the 7th and 188th armored Brigades.

[7]211, Yishai Division, which was involved in 1982 in war crimes in Lebanon, where hundreds of Palestinian were murdered in Sabra and Shatilla massacres in Lebanon, among other incidents. The Yishai division was dissolved in the early 1990s. Mizrahi was a company commander of the Bnei Or (Sons of Light) 480 armored corps brigade. He also was a deputy commander of the “Kfir” war tank infantry brigade.

After the Lebanon war 1982, Mizrahi was rehabilitated and released from the IDF. He worked as a security attaché of the ISA abroad until 1988. This means that he was guarding the criminal commanders who were studying at American colleges.

From 1988-1990, Mizrahi was a commander the Israeli military death squad “Nahshon” assigned to the Ephraim Brigade (a branch of the “Kfir” armored corps which operates in the West Bank), and was involved in executing Palestinian civilians and the stones throwers, and breaking the bones of many Palestinian victims during the first Intifada.

In 1992 Mizrahi was a commander of the “Shimshon Battalion” assigned to the Etzion Brigade, (another branch of the “Kfir” death squad unit operating in the West Bank), where the extremist squatters were welcome to join IDF operations to murder Palestinians. He was the commander of a reserve armored brigade of “Merkava” tanks.

Between 1990 and 2000, Mizrahi was a commander of an IDF reserves unit and the commander for company and battalion war criminals.

All these titles and names and assignments are just fancy cover for what Mizrahi and those like him are: thugs, bloodthirsty murderous beasts who should not be left to roam free.

It should be noted that the PA ambassador to the UN killed and buried the Goldstone report in order to protect the Israeli war criminals who took part in “Operation Cast Lead” in Gaza.

It later became known through “Reuters” [8]that the PA was involved in the Gaza massacre: Israeli Foreign Minister Avigdor Lieberman said on Monday that President Mahmoud Abbas urged Israel to topple Hamas in the Gaza war last year, then turned around and blamed Israel for war crimes. “Over the past year, I witnessed Abbas at his best. “During Operation Cast Lead, he called us personally, applied pressure and demanded that we topple Hamas and remove it from power” he told Israel’s Maariv daily.

Who is Yoav Mordachai, who is Nitsan Alon, and who is Aviv Reshev? This will be written in follow-up articles in the “Terrorists” corner of the blog, and in the picture gallery.