[2]Strip found a girl of 12 years hanged on a tree in the courtyard of her family’s house in Qarara, north-east of Khan Younis in the southern Gaza Strip. The body of the girl was transferred to the Nasser hospital in Gaza.

The murder of this child in Ramadan, the month of fasting and worshiping God, could be described as a duplication of the crime of murder in a society which professes itself as Muslim. Murdering a child for honor is a crime, and violating the principles of Islam and the holiness of Ramadan is a crime too.

According to my knowledge, children are victims of sexual abuse and incest inside many Palestinian families. Many incest victims, mostly girls, were poisoned or murdered at the hands of the perpetrators of the crimes in order to cover the fact that incest happened. The deaths of these children were always declared as “normal” in the cases which I have known. In Palestine, talking and reporting about incest is forbidden and considered as a sin, not because of the horror of the crime, but in order to cover the crime and the perpetrators.

In the past, such cases sometimes happened and became known, but under the current situation, abusing and murdering children seems to have become something normal, it looks like poverty and desperation creates radicalization and crime, and the weakest members of society are the most obvious victims. It goes so far that it looks like murdering women and children has become some kind of national sport to Palestinians where everybody has to show off on their radical views and how “smart” they are in the commission of their crime against those of their own blood. Children are free-for-all, women are reduced to covering themselves in extreme ways [3], producing children, and helping to murder those children who get out of line for the extremist views being imposed on our society by imported religious radicals. 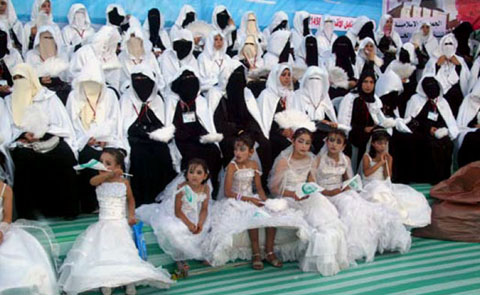 A group of brides in a mass wedding ceremony held by the Islamic Charity at the stadium in Rafah on August 4 2010. Covering women like this is a new and was not known to Palestine throughout history. Pic. Credit: Al-Quds newspaper, Jerusalem

Since last years after the establishment of two conflicting Palestinian powers in Gaza Strip and the West Bank, the crimes of murdering females and girls on a background of allegedly keeping on the “family honor” increased. The sentence for murdering females under the pretext of “family honor” is between six months and three years jail. President Mahmoud Abbas, who presents himself as a liberal power and not a radical one, insists that the change of the horrible laws regarding the “honor killings” would happen after declaring a Palestinian state, contrary to what he promised in the past year, namely to change these laws with priority. He did not fulfill his promises for unknown reasons.

In Palestine, in the West Bank and Gaza, the families of the murdered females often claim that the victims committed suicide in order to avoid falling under even the lax law which proscribes this crime.

On last Saturday August 7 2010 [4], a married female, 46 from Hebron and under nominal PA power, was found murdered in her house “under unknown circumstances” according to the PA police. The Palestinian Public Prosecutor Khader Al-Toubasi transferred the body to the autopsy to identify the main causes of the death, but those reasons remain unknown after they were clarified and found related to so called “honor” crimes.

On last August 2 2010, a girl, age 17 [5], was “suicided” and thrown from a window on the fifth floor of the Al-Farra building in Khan Younis in Gaza. The girl was pushed from the window by her family and did not suicide herself as it was released about her murder. The crime was committed as a result of her refusal to marry somebody who her family had chosen as a husband for her (an old man). According to media information, the crime came to light after a boy from her neighborhood [6] whom she intended to marry killed himself of despair over her death.