28 May 2010 – Vienna – Kawther Salam – At the Vienna International Center (VIC), a group of experts on biodiversity and about 300 participants met to share and to discuss their

[3]experiences and analyses on the value of the diversity, “the value of biodiversity for tourism, farming, nature conservation and economy”, and to discuss practical solutions to beware and integrate diversity into every days life and into their work. The event was held to mark the World Environment Day and the 2010 International Year of Biodiversity. It was organized by the Austrian NGO “Die Umweltberatung” (Eco Counseling Austria) in co-operation with the United Nations Office at Vienna (UNOV), the United Nations Environment Programme (UNEP) and the United Nations Information Service (UNIS) Vienna [4].

The event included two sessions, a morning session where all the experts and participants met, and the afternoon session in which the experts and the attendants were divided into three different workshops to share their experiences and discuss practical solutions. (Click of pictures to see them bigger).

The morning session was opened by Chairman Christian Mokricky [5] from Eco Counseling Austria, who welcomed the diversity of partners ranging from businesses and environmental organizations to scientists and politicians, all joining forces to contribute and mark the World Environment Day. He explained that the Environment Day Talks were founded on World-Environment Day, 5 June 2009.

[7]video-message from Ruanda, and highlighted the fact that the loss of biodiversity does not only constitute an ecological but also an increasing economical risk, “Protection of the environment is also economic policy, and economic policy has to also be protection of the environment in the year 2010”. He added, particularly the combination of ecological wealth and its newly developed, groundbreaking environmental policy were reasons for selecting Ruanda as host country for this year’s global celebration of the World Environment Day. Steiner said: the slogan for this day is ‘Many Species, one Planet and one Future”. People should be sensibilized for the value of species and ecosystem. We as a community of people, nations and societies have the responsibility to preserve biodiversity and work together on this issue as a community of nations.

In a video message to the symposium the British primatologist, ethnologist, anthropologist, and UN Messenger of Peace, Jane Goodall, well-known for her 45-year study of chimpanzee social and family interactions in Gombe Stream National Park “Tanzania”, called for action to stop biodiversity loss and prevent ecological systems from moving closer to a tipping point.

[8]Keynote speaker Hans Friederich, IUCN Regional Director PAN/ EUROPE [9], referred to the interconnectedness of economy, environment and human well-being: “The world is grappling with economic and climatic uncertainty, and the consequences this may have for food and water security. Healthy biodiversity and ecosystems underpin the long term resilience of social and economic development. We can no longer ignore the fundamental role of biodiversity as a foundation of human well-being,” he said.

Andreas Beckmann, director of the Danube-Carpathian Programme of (WWF) [10], pointed out the fact that biodiversity is the essential basis for our lives, our health and well-being, and last but not least, the bedrock of our economy. He warned the audience about the costs of loosing

[11]diversity. By 2050, ongoing losses in flora and fauna in Europe could cost us upwards of 1.1 trillion Euro per year. 2010 was supposed to be the year when the loss of biodiversity was halted; but its erosion continues relatively unabated.

Beckmann said “there is plenty of reason to care about biodiversity. It is our critical life support system, the essential basis for our lives, our health and well-being, and not least the bedrock of our economies. Besides essential products like food or medicine, biodiversity provides a variety of life support systems and ecosystem services, such as topsoil production, flood defenses and water regulation, but also cultural services such as recreation or aesthetic pleasure.”

Kristina Jahn, Manager for Sustainable Business Solutions at PricewaterhouseCoopers [12] stated that the value of biodiversity in monetary terms and the global impact of biodiversity loss on the business sector in particular was examined by “The consequences of biodiversity loss and ecosystem degradation will not just affect primary industries with a direct reliance on natural

[13]resources such as extractives, forestry, farming and fishing but they will also affect the supply chains and growth objectives of the consumer goods industry and most of the other sectors in the developed and developing world,”.

She added: when it comes to integrating measures for the protection of biodiversity into the management systems of different industries and their decision making processes, the financial industry could play a key role. For example, banks could consider integrating biodiversity principles into their lending and investment policies”.

[15]of Science posed the question about moral value of biodiversity. “It is not only biologists who are interested in the diversity of life on earth; this diversity is also a moral challenge …humans rely on the diversity of species. Therefore, species preservation actually has to be seen as preservation of humankind. This requires an ethics that critically reflects human actions with regard to other living beings. However, any moral system consisting of mere imperatives will not meet the requirements of a comprehensive ecological ethics. Of crucial importance is the recognition of other living beings as a moral duty for humans.

Edgar Edrukaitis, coordinator of the business and Biodiversity Initiative [16], pointed out the fact

[17]that 60% of all ecosystems in the world, 21% of the mammals and 30% of the amphibians are endangered. He emphasized the value of “self-evident” natural service: Honey bees are important for honey production and pollination of ornamental plants and agricultural crops, this creats a value of 150 billions of US-$ per year. At the moment, there is a drop of honey bee-populations all over the world, 85% in USA, 30% in Japan and Switzerland. In this way, the global costs for the death of honey bees are hard to imagine!

Edrukaitis talked about the Initiative businesses take on leadership, he said: “under the auspices of the German CBD presidency and with the ‘Biodiversity in Good Company’ Initiative founded in Bonn in 2008, the international community has for the first time an initiative from the private sector dedicated to biodiversity. As of yet, more than 40 companies from Germany, Japan, Brazil, Switzerland and South Africa have signed the Leadership Declaration. Companies have voluntarily joined the initiative, and in so doing agreed to integrate biodiversity protection and conservation into their business plans and management systems. What is more, their actions are leading to supplier sensitization about the topic of biodiversity and the publication of best practice examples”. 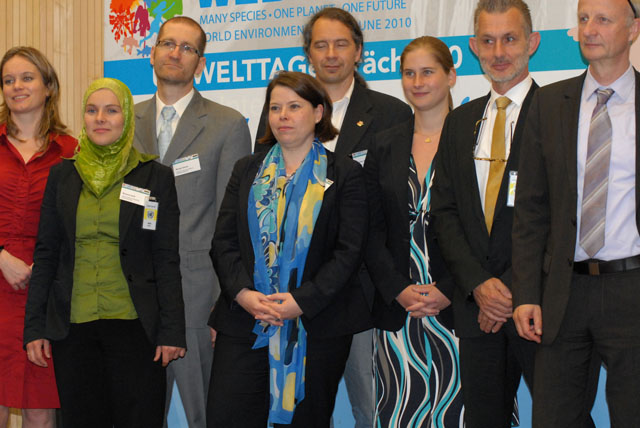 Participants at the ENVIRONMENT DAY Talks 10 - Value of the DIVERSITY of Values - 28 May 2010, Vienna International Centre. Pic. Credit: Kawther Salam

Florian Nehm from Axel Springer AG told that his company procures about 350.000 rolls of recovered paper and fresh fibre from 50 different paper factories in about 15 countries a year. The corporate group wants to take care for the origin and recycling of papers furthermore and raise the involvement of stakeholders connected to wood, paper and recycling chain.

[20]Biodiversity and Spatial Planning” was the issue of the workshop with Marianne Darbi and Ulrich Walz [21] from Keibniz Institute of Ecological and Regional Development. They emphasized the importance of different types of landscapes and habitats for the survival of plants and animals, spatial planning has to give place and save biotope networks, habitat corridors and “hot spots” of high diversity to give a chance to the species. Human beings can profit with high-value areas for recreation for instance.

Ruth Moser, Coordinator of the Biosphere Reserve Großes Walsertal and Michael Getzner [22], Associate Professor of the Department of Economics the University of Klagenfurt analyzed the value of biodiversity for tourism. Sustainable tourism is not a threat to diversity; it can develop a better understanding for the value of nature and can create sustainable forms of business and new jobs. Some species seems to have a “great charisma” to a lot of people and are “flagship-species” for special landscapes like the Capricorn for Austrians Alps. Other species like Alectoris sp, a special type of chicken, are living in same habitat but seems to be less “sympathic” to most people. To know and to use these correlations is a challenge and a chance at the same time.

[23]The event was ended by a joint session in which all experts, organizers and participants met again and ended their discussions. The session was moderated by Corinna Milborn, a journalist, author [24] and presenter.
Milborn invited the heads of each workshop and asked them to summarize the results of their workshops and then opened the questions and comments session for the participants. Only three questions were raised before she asked for applause for the organizers of the event.