April 8 2010 – Vienna – Kawther Salam – UN [2] Secretary-General Ban Ki-moon [3] started his four days visit to Austria by holding a meeting with the Federal President Dr. Heinz Fischer [4]in his residence in the first district. Dr. Fischer warmly welcomed the guest and spoke briefly about the good relations of Austria with the United Nations. After that, Dr. Fischer, Ban Ki-moon and Antonio Maria Costa [5], the director of UNOV [6] and other high UN officials held a meeting with Dr. Fischer, which lasted about half an hour. 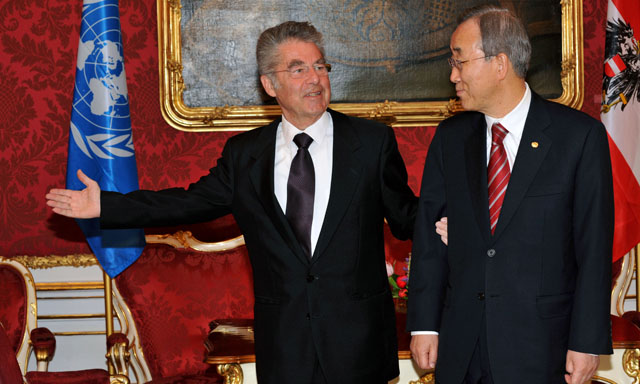 Later, Secretary-General Ban Ki-moon and the delegation with him moved from the presidential residence to the Austrian Foreign Ministry [8], where they met Foreign Minister Michael Spindelegger [9]. He continued his tour and held several meetings with Werner Faymann [10], the Federal Chancellor of Austria [11], and Barbara Prammer [12], the President of the Austrian parliament [13]. Ban Ki-moon also delivered a speech at the Austrian Parliament before hundreds of politicians, ambassadors, and representatives of Austrian civil organizations, to which they listened attentively and greeted with a warm applause.

The UN peacekeeping missions, Middle East peace talks, nuclear weapons, the situation in Kyrgyzstan, the Afghanistan war and the climate change were the top issues mentioned during the meetings and discussions of Ban Ki-moon with Austrian official. 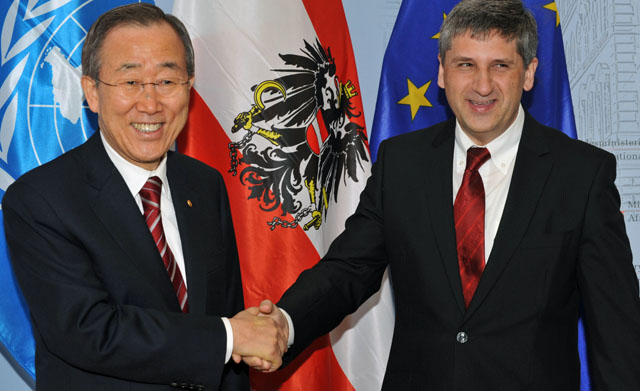 “I had seen the use of Austrian peacekeeping mission to the UN in Lebanon as a welcome initiative and will raise this issue in the federal government meeting once again. Austria would fulfill the desire Bans and actively in UN peacekeeping missions in operation” said Minister Spindelegger.

During both press conferences, the UN Secretary General said that Vienna is his second home which he frequently visits either in transit or on an official visit like this one. It is a great pleasure to be back in Vienna, a city that is very special to me, personally and to the work of the United Nations. As you might know, Vienna is my second home.

[15]and crime, end nuclear weapons, tackle nuclear challenges, promote energy security and much more. He thanked for Austria’s leadership in the Security Council. As a valued Security Council member for the period 2009-2010, Austria is working alongside other Council members to address a range of pressing issues of peace and security, he said.

Ban Ki-moon also expressed his “very high thanks” for the Austrian contribution to UN peacekeeping missions, particularly the use of women as police officers in the peacekeeping missions. He also spoke about the “necessity and importance of eliminating all nuclear weapons”. “We have to realize a world without nuclear weapons,” said Ban Ki-moon. He greeted the signing of the new START treaty between the Presidents of the US and the Russian Federation. He described the treaty as a very great initiative of the leaders of these two countries and he hopes that this initiative will add an impact to the forthcoming Nuclear Security Summit in Washington, D.C. as well as to the NPT Review Conference which will be held in New York in May 2010.

Minister Spindelegger commented on the speech of Ban Ki-moon about nuclear weapons, saying that Austria would cooperate in disarmament matters with the UN and also the five-point plan to support bans on nuclear disarmament. 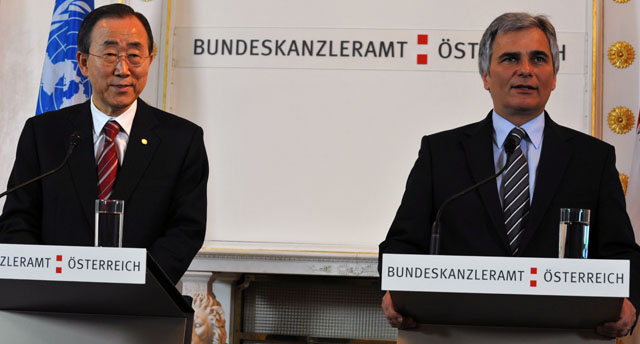 Ban Ki-moon said that he had discussed with Werner Faymann, Federal Chancellor of Austria, how the international community could help to facilitate the Middle East peace process and he was briefed about his plan to visit the Middle East. “I briefed him on my own recent visit to the Middle East, including Gaza, and we discussed developments and the prospects for proximity talks between the Palestinian Authority and Israel”.

“We discussed at great length the situation which is happening in Kyrgyzstan and we agreed that while we support the freedom of assembly, all the differences of opinion should be handled properly according to the rule of law and also respecting human rights, and we expressed our concern. And I explained to him my plan of dispatching my Special Envoy to the region, Mr. Jan Kubiš, and my intention to work closely with the OSCE in this regard”.

“We are also of the same view that this is an important year for progress on a variety of vital concerns – from nuclear non-proliferation, to gender empowerment, to building a road-map to achieve the Millennium Development Goals”.

Faymann and Ki- moon also raised in their talk the climate change, and how they can maintain the momentum from Copenhagen. “We need to work hard to achieve a robust legally binding treaty as soon as possible” stated both Faymann and Ki-moon. “The Austrian Government’s is willing to provide all necessary, possible support for the coming climate negotiation process” said Ki-moon. 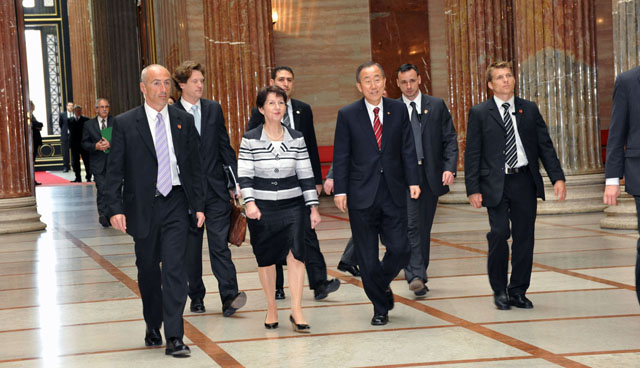 Ban Ki-moon was warmly welcomed by the President of the Austrian Parliament, Barbara Prammer, during the noon and evening visits to the Parliament. Ki-moon met the representatives of the political parties during a meeting. At the evening, he delivered a speech at the Parliament and was warmly applauded greeted. He listened to the questions from the Austrian political audience and answered them briefly.

One of the questions which Ambassador Dr. Ursula Plassnik [18], former Federal Minister for European and International Affairs, Member of the National Council and Special Envoy for International Women’s Issues, raised was about the increased violence and sexual abuse against women and how the UN would eliminate this problem. 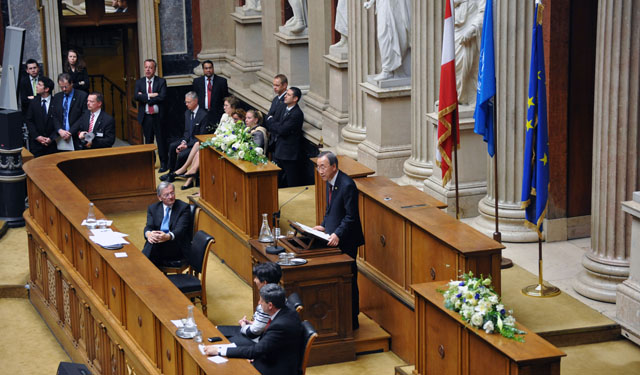 UN Secretary-General Ban Ki-moon while speaking at the Austrian parliament.

In response to her question, Ki-moon spoke about the necessity of changing the culture and the mentality of men societies toward women, who represent over 50% of society. He focused on the need to abide by human rights conventions, which guarantees the equality of women and men. 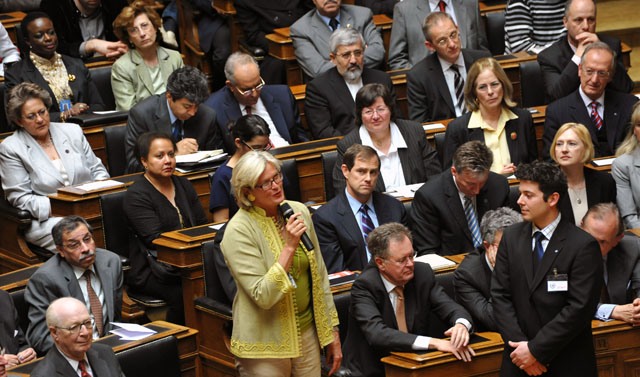 It is worth mentioning that Dr. Plassnik received “Premio Mediterraneo Diplomazia” in Rome, April 12 2010 which awarded to her by the “Fondazione Mediterraneo”. The presentation ceremony was attended by the Austrian Ambassador in Rome and representatives of the Italian government and the city of Naples. Read more news [21].