According to my information, alone in January and February 2010 13 women were murdered in so-called “honor killings”, and the bodies of 7 victims were dumped in the streets of the West Bank.

Why has the PA until now not changed the discriminatory laws and practices which allow these grave crimes, while many laws have been changed?

Is the continued tolerance of “honor killings” and discrimination against women part of the process of building a Palestinian state?

[4]“You are absolutely right, and the lady who spoke today (he meant Suhair Azzouni) you should go and talk to her, she raised the same issue, she gave the statistics about the killing of the 13 honor killings in the occupied territories, and she defended the cause of the Palestinian women before the audience, while you unfortunately was not here, in the morning session. Go and speak with her, take a copy of her statement.

At the final conclusion session of the second day of the seminar on Assistance to the Palestinian People, Ambassador Riyad Mansour [3] said that “The UN is not the right place for Honor Killings talk, but we have to deal with this issue while it is part of our society’s problems”. But my experience is that in fact it is never the “right place” or the “right time” to speak about honor killings, sexual abuse, violence and discrimination against women for the honorable gentlemen, so much that one could come to the impression that they actually protect these atrocities against women with a wall of never-ending justifications.

What prompted me to ask the question about the so-called “honor killing” in Palestine was the steady increase in these crimes, which summed up to 13 crimes carried out during the past two months January and February 2010. This is a staggering figure when compared with the annual figures for such crimes perpetrated during the past years in Palestine.

The equivalent of this crime is the silence of the Palestinian National Authority and the preservation of the Jordanian penal code of 1960, which is applied in Palestine until now for protecting the criminals. In Palestine it is legal to kill women in order to protect the “honor” of the family. This and other Jordanian laws are strongly discriminate between men and women, they are inhuman and a crime against all women.

The claim by Ambassador Mansour that the PA intends to change the laws, or that this is “a deficiency of the laws” is not credible, as I spoke last year about this very issue with the justice minister of the PA, Ahmad Al-Moghani, during a visit of the minister to Vienna.

Palestinian President Mahmoud Abbas [5] did not wait for the announcement of a Palestinian state when he passed numerous resolutions and presidential decrees relating to other crimes, including the Presidential decision, which protects the interests of the employees and institutions of the PA.

Palestinian President himself committed flagrant violation of the law when he issued his decree decision “military order” on June 6 2007 which granted the military courts the power to deliver on military law against those involved in civil crimes that may affect staff in the Palestinian Authority or its institutions. “See the military order of President Abbas as (PDF [6]), and see a copy of this military order below.” 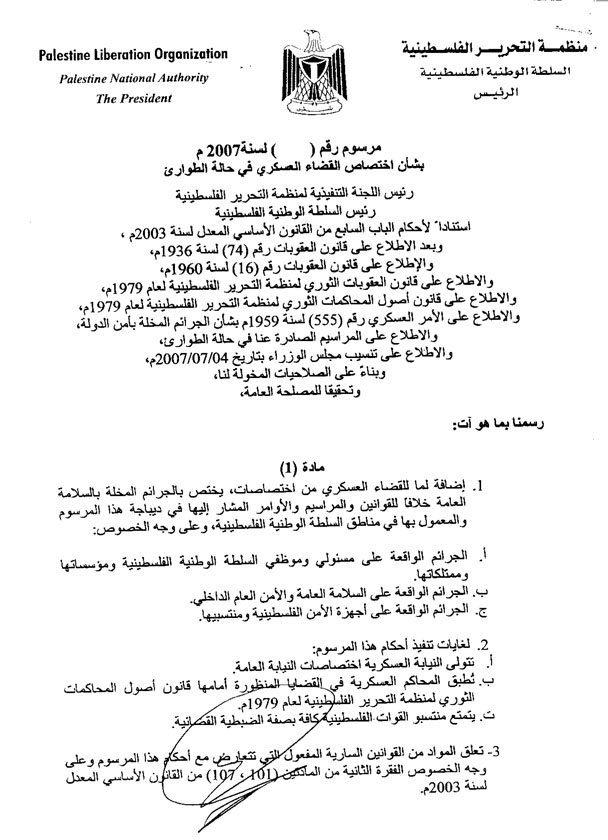 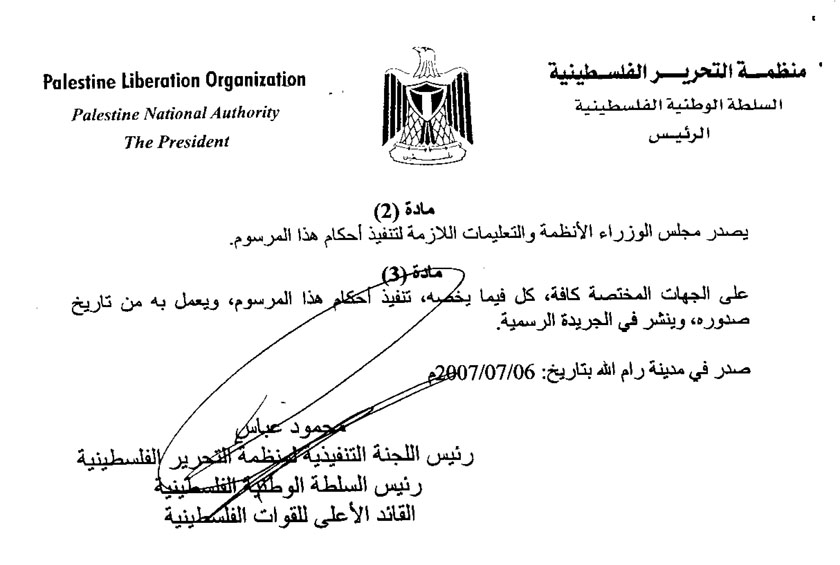 Recently, an incident of sexual harassment [8]against a woman who had applied for work in the PA was exposed with a video. The person who was involved in this crime was R. Al, the political assistant in the office of the President Mahmoud Abbas.

In order to carry more information related to “honor killings” and sexual assaults on Palestinian women, I re-publish a brief summary of what I spoke during lectures that I gave at conferences held in Europe, or which I have published in past articles:

“Seven women were killed in the Palestinian territories because of “honor killings” in the first month of the year 2010. These news were released by Palestinian human rights organizations interested in women’s issues, but according to my sources, this statistic was falsified and the real number of women who were murdered, only in the cities of Ramallah and Hebron since the beginning of the year 2010 has exceeded 13. The sources confirm that these seven women, who were registered in the statistics of human rights organizations as victims of “honor killing”, were left in public streets and in fields after being killed and there was no chance for the perpetrators to hide the crime”. Read more [9] “Over 13 Honor Killings in Two Months in Palestine”.

7- Any mention of violence against women was off-limits: former President Arafat

[11]once gave orders to confiscate all copies of a monthly magazine from every shop in Ramallah one hour after its appearance, because the magazine had reported about cases of sexual abuse of PA workers in the offices of the Palestinian National TV. An official from the office of former President Arafat threatened me that “the blue flies will never find your body” if I reported about certain cases of sexual abuse in the PA itself”. (Click on the picture to make it bigger).

Read the full article [12]: “The King of Jerusalem” which was delivered at the 2nd Conference of Women Journalists and Communicators of the Mediterranean [13] which took place at the localities of the European Institute of the Mediterranean [14] in Barcelona on October 5 and 6, 2007 under the sponsorship of the Government of Catalunya [15], the City Council of Barcelona [16], the Association of Journalist Women of Catalunya [17], and the International Network of Women Journalists and Communicators [18].

“(4) In addition to the horrors perpetrated upon us by the occupation, the women of Palestine must endure the repression by our own men. Honor killings, rape, incest, violence, exclusion from a wide range of activities and rights are life as usual for all women in Palestine. Under such conditions, it becomes clear that “human rights” and “women rights” are very personal concepts, not something “good to have” but a matter of survival, for both genders. Let me start with personal examples.

My youngest sister is one of the many women who have benefited from the respect shown for women rights by the PA. Three years ago she married an employee of the PA National forces (Samir Udeh). As we found out, she became his second wife, after his first wife ran away from him. During the wedding festivities, the dowry of my sister disappeared, it was later found out that her husband had stolen it, and he later claimed that he had stolen it for “security reasons”. But the truth was that he used this gold to open a brothel for his friends from the PA employees, and he also married a young girl in secret. He sold the favors of this new wife to his colleagues from the PA, and he made and sold videos of these activities until the family of the young girl found out what was going on. The family killed the poor girl and cut and hung her head before the house for all neighbors to see, in order to save their honor.

(6) Neither the man nor the family of the murdered girl were punished, none of the men who participated in the abuse of this woman were punished, and my sister, who first heard about her husbands crimes from neighbors, could divorce this man only because I was able to intercede in her favor. Worst of all, these horrible deeds are not even considered crimes, because under the Jordanian penal code of 1960, which is applied in Palestine until now for unknown reasons, it is legal to kill women in order to protect the honor of the family. This and other Jordanian laws strongly discriminate between men and women, they are inhuman and a crime against all women.

(7) The honor killings have strongly increased in Gaza and Ramallah during the last years. At the beginning of 2008, a man from Gaza who had escaped from jail where he was for a rape murdered his three sisters because he suspected them of “talking with men”.  In Ramallah, two sisters were murdered in April 2008 by their brother, for “honor”. The newspapers do not report these crimes, and neither does human rights organizations: the censorship is absolute.

But far from asking the PA to do something for the rights of women, the EU has recently gifted them with 150 million Euros for their corrupt forces and to build a jail by 2010, as if the hundreds of jails of the Israelis were not already enough”.

Read the full article [19]: “A Sincere Offer of Peace to Israel”, a speech, was delivered on Sunday 6 July 2008, in the auditorium of the Faculty of Dental Medicine of the Universidad Complutense de Madrid.