Feb. 19 2010 – Now that the latest atrocity of Israel has badly blown back, with the

[1]pictures of 11 death squad assassins published worldwide, 2 names of Palestinians connected to the PA published, 6 more suspects in Dubai, knowledge that the whole crime was coordinated from Austria, consequences are inevitable. These are not consequences under national or international law, but the kinds of consequences which are due when mafia thugs or secret agents are burnt, and which seldom come to the knowledge of the public.

Whatever happens, the Dubai 11 and all other people who participated in any capacity in this botched assassination must count on being killed if they do not surrender to or are not captured by the security forces of another nation. Regardless of what intentions the mossad has towards these elements, they are finished, and, even if the manage to evade capture, their refuge in Israel will be only temporary at best, until the pertinent decisions are taken. 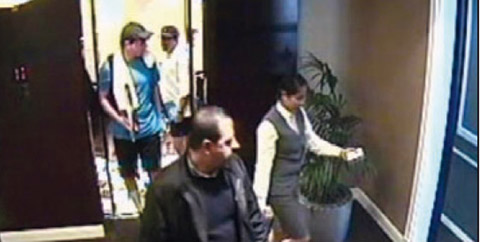 Interpol on Thursday issued arrest notices for 11 suspects – six listed with British passports, three Irish, one French and one German – wanted by Dubai for the killing.

Now that they have been put on the wanted list of Interpol, that their faces are known, and that Dubai has stated that their retina prints taken at Dubai airport and other details will be published, they represent a giant liability to the Zionist regime of Israel. They are publicly known carriers of secrets, presumably in the know of many terrorist deeds of the mossad around the world. Their disposal will become an inevitable consequence, even a priority, to protect the secrets of global terrorism practiced by the mossad.

[2]murder of Mabhouh. They stated that the British, French, German and Irish authorities expressed during contacts with Dubai officials their strong displeasure because of the fact that the passports of their nations were used to enter Dubai and perpetrate this crime. Experts of the Dubai Police said that “the technology of recording retina prints at the airport will help to identify the perpetrators of the crime in Dubai, as it is difficult to hide or falsify this imprint, even if the person has surgery to change their face”. The videotape distributed by the Dubai Police about the perpetrators of the al- Mabhouh murder shows that all of them passed through the airport, which uses records retina prints.

[3]Why did the Dubai Police not show the photos of the two Palestinians who were arrested in the wake of the assassination of Mahmoud al-Mabhouh in Dubai?

Why did the police not publish the names of the Palestinian suspects?

Is it because they are elements connected to the Palestinian National Authority?

Last week, the Dubai police stated that had they had arrested two Palestinians among 18 suspects in the al-Mabhouh assassination, but they have not yet identified the two Palestinians or revealed their pictures.

Instead, the leader of Hamas, Mohammad Nazzal, announced the names of

[4]Palestinian detainees who were involved in the assassination of al-Mabhouh besides the Israeli death squad. He named them as Ahmed Hassanein, a former member of the Palestinian Intelligence Service, and Anwar Shuhaiber, a former officer in the Palestinian Preventive Security Forces. Both are former members of the PA security forces with links to Mohammed Dahlan of Fatah. Hamas claims that the senior Fatah official visited Dubai after these elements were arrested in order to try to persuade the Dubai authorities to release their operatives.

The spokesman of the Jordanian government, Nabil al-Sharif, revealed last Monday that Jordanian authorities handed these two Palestinians to the Dubai authorities. The detainees were caught by the airport security after their arrival at Amman airport.

Meanwhile, Mahmoud al-Zahar called on the West to forbid Israel from using their land to enter Arab countries and kill Palestinians. He said: “If the West allows the Zionist enemy to turn its land into land where Palestinian Muslims are murdered, or leave from it to Arab countries to assassinate our people, then we will confront them as God compels us too: ‘One evil for another'”, he said at a sermon in a Gaza mosque Friday.

While all the consequences and the scandal in the wake of this crime are still developing, it is noteworthy to mention that the Reut Institute, an extremist think tank which advises the Israeli regime, has recently released two the executive summaries of two reports (see here [5])  and (here [6]) which deal with the increasing “deligitmization” which the zionist entity suffers (which of course can’t be explained). It is funny to note that among their “policy options” they write

Now that Israel is successfully in the process of affirming its image of an obnoxious cry-baby and leg-humping hyena, a liability to anybody who has anything to do with them, one can’t help but smirking while asking where these thousands of “personal relationships” are to come if not from among people who are ignorant of their own best interests.