On Nov 10 2009, two days after the twentieth anniversary of the fall of the Berlin Wall, the war criminal in Iraq, the envoy of the “Middle East Quartet”,  Tony Blair [1], opened the occupational apartheid checkpoint “Jalama”, similar to and far greater than the Berlin Wall, which is built inside the Palestinian occupied territories on the stolen lands of the city of Jenin in the West Bank, and not on the borders of June 1967. 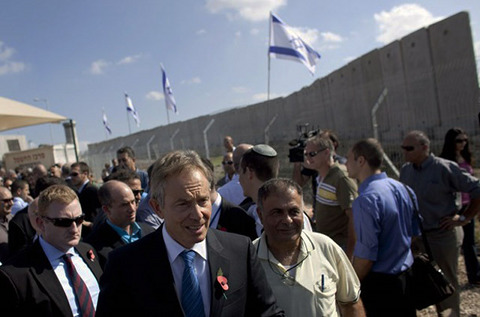 The apartheid checkpoint “Jalama” was financed by USAID as one further scandalous support from the US to the jewish zionist thieves who come from the USA and Europe to steal Palestinian lands in the occupied territories. The celebration of the apartheid gateway was attended by the representatives of the State of Israel, the criminal Silvan Shalom, vice Prime Minister and Minister for Regional Development; the criminal Avishay Braverman, Minister of Minority Affairs, the indicted war criminal Matan Vilnai, and Deputy Minister of the war criminal Ehud Barak, the criminal Danny Atar, Head of Gilboa Regional squatters colonies council, a European delegation, representatives of the American Embassy, and Moussa Kadura, PA Governor of Jenin.

Thus, Europe with it’s delegation, and the presence of Tony Blair proved in a serious and practical ways the full support to the Israeli genocide, apartheid and the violent the theft of more Palestinian lands, and the de-facto demarcation of new borders of the state of occupation, contrary to the provisions of the International resolutions.

Before the existence of the Palestinian authority in Palestine, there was no check point at the entrance of Jenin. In 2000 the Israeli occupation set up stones, dirt, and earth and swept the main street at the entrance to Jenin to block the passage of vehicles and the movement of the Palestinian citizens. The situation continued for about two years.  In 2002, The Israeli occupation set up a checkpoint at the entrance of Jenin in replacement to the stones. This was the first step of preparation for the massacre of 3–11 April, 2002. That Israeli military checkpoint became a permanent one until the USAID aided the building an apartheid separation border on the Palestinian lands.

The separation border “Jalama“  swallowed thousands dunums of Palestinian agricultural lands, cut apart Palestinian families and isolated them from reaching the farms which feed them, their property.

The miserable Blair, with the yellow smile which appeared on his wretched visage during the opening of the apartheid separation wall, did not forget to demand the Israeli occupation to open the crossing border completely over time. This dangerous European hypocrisy shows the collusion of Europeans and Americans to provide cover for Israeli violations of the Palestinian rights land, and their support for the occupational theft in a way which is made to appear to the public as humane and righteous, but in fact is dangerous and a clear crime of genocide. 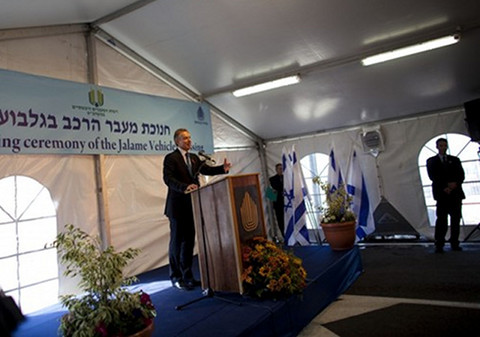 The opening of this apartheid separation border “Jalama” on the Palestinian lands near Jenin, which was presented by the jewish-copntrolled media as a great event financed by USAID and opened by Europe to “help free Israeli-Palestinian social, commercial, and economical movement” is big lie and clearly an act in furtherance of apartheid and ethnic cleansing. It is a disgrace in the history of humanitarian and human rights, as it also shows the increasing lawlessness of a EU under the influence of zionism.

Some important facts which the zionist-controlled media and Blair did not mention are the Israeli restrictions imposed on every Palestinian who wants to cross the border. They are forced to ask for a special Israeli permission, what is always used by the Israeli spy agencies to blackmail the permit applicants in order to make them to spy on other Palestinians.

Few hours after opening the gate in the apartheid separation wall and after the jewish-controlled media left the place, the usual tragedies at the checkpoint resumed their normal course. Hundreds of Palestinians were standing in long rows, sitting in small rooms. Hundreds of cars were stopped and waiting for some zionist drug dealers of the Israeli IDF soldiers to check them and allow them passage to return to their homes, all the while the IDF soldiers were enjoying their sadistic humiliation of the people, even of those who carried the Israeli ID. The make up which the criminal Blair put on the dirty face of zionism was removed as the guns of the IDF soldiers were again pointed at the chests of Palestinians civilians. That is the reality of Jalama crossing.

A few days before EU-USA-Israel opened their apartheid crossing “Jalama”, on 25 October 2009, one woman with israeli ID and two children fell unconscious at the crossing. These Palestinians waited for six hours at the Jalama crossing.

According to Jaber Abd al-Hamid (44), an Israeli-Arab resident of a West Bank town who was among those present, told Arab newspapers “I went with four relatives to visit a family in the Jenin area who lost their son. We returned to the crossing at around 4:30 PM and we saw that there was a long line of people waiting. I asked why people weren’t being allowed in and I was told there was an even longer line inside.” 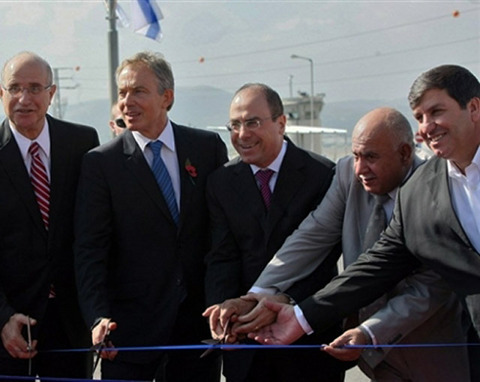 Others who were at the border that day told Al-Hamid, who arrived the border at six PM, that they had been waiting since 2:30 PM. “After some time we were let in through the first gate and we entered the crowded waiting room. Inside the room, which I estimate to be no bigger than 80 square meters squared (about 10m x 8m), there were about 200 people waiting, including many women and children”. “There was nowhere to sit and nothing to eat. The entire time only a thin trickle of people passed through the security checks into Israel, while waiting in the room a woman fainted and fell on the floor. The people yelled at a soldier that children were unconscious. Instead of responding, the jew cocked his gun towards them. It is a disgrace that we are treated like that.”

This is the reality of Blair and the EU-US-Israel “Jalama” apartheid wall crossing. It’s the same story at Bethlehem, Tarqumia, Qalandia, Howarah and hundreds of other checkpoints which were turned into apartheid crossing gates between the Palestinian towns and cities. They are all clearly intended to further genocide and implement apartheid, what is probably why Blair was celebrating.

The Participation of Moussa Kadura, the PA governor, and other Palestinian officials in the opening ceremony of the apartheid crossing “Jalama” is disgrace, a shame and a scandal. The “Jalama” crossing is a gate in the “apartheid wall” which is inside Palestinian territory. The PA representatives in this shameful celebration were not representing the Palestinian national and political demands. These “Judenräte” all represented themselves, their pockets and their continued collusion with the American-Israeli project to destroy Palestine and Palestinians